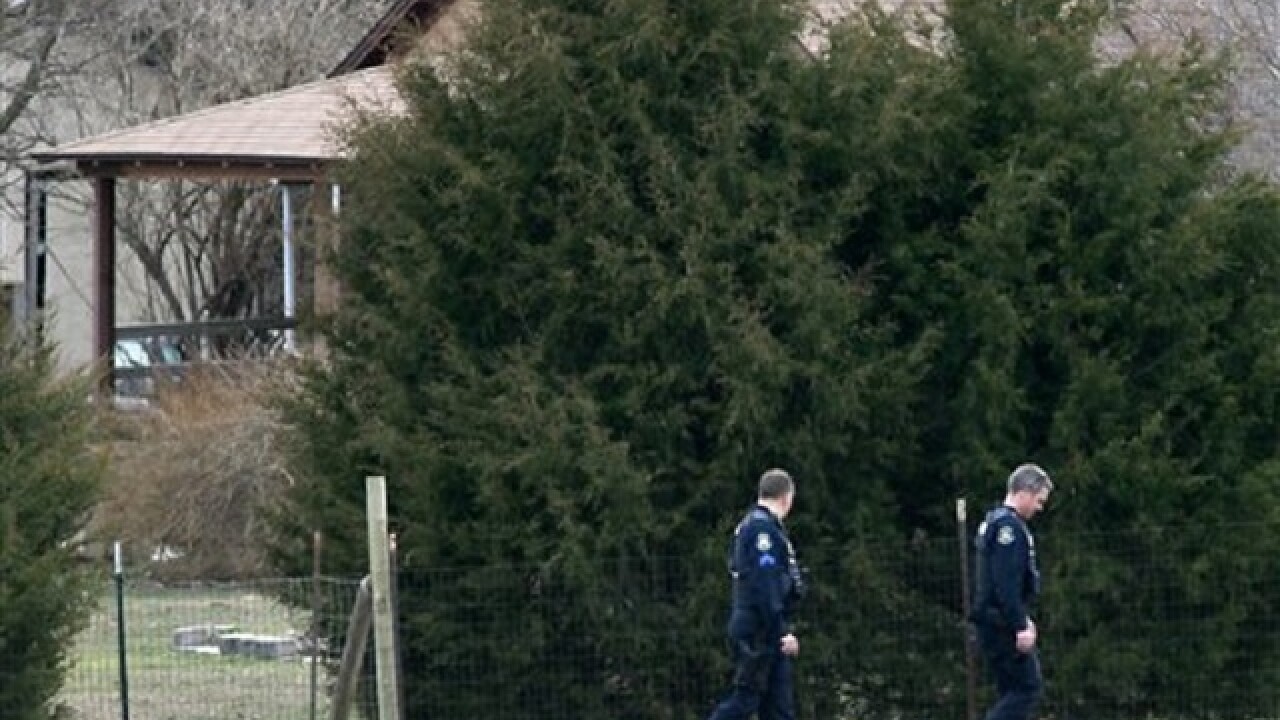 Cristina Fletes
<p>Police walk near a house where a man was found murdered on Tuesday, March 8, 2016, near New Florence, Mo. (Cristina Fletes/St. Louis Post-Dispatch via AP) EDWARDSVILLE INTELLIGENCER OUT; THE ALTON TELEGRAPH OUT; MANDATORY CREDIT</p>

KANSAS CITY, Kan. (AP) — A man suspected of fatally shooting four people at his neighbor's home in Kansas before killing another man about 170 miles away in a rural Missouri house was taken into custody early Wednesday morning after an extensive manhunt, the Missouri Highway Patrol said.
The Highway Patrol told the Kansas City Star Pablo Antonio Serrano-Vitorino was arrested in Montgomery County, Missouri. The suspect was found lying on a hill just north of Interstate 70 and no shots were fired, the newspaper reported.
"He looked exhausted," Sgt. James Hedrick said.
The Star reported the area where Serrano-Vitorino was apprehended is near a McDonald's restaurant and several motels.
Serrano-Vitorino, a Mexican national who authorities said was in the country illegally, is accused of fatally shooting four men late Monday night at his neighbor's home in Kansas City, Kansas. He was also wanted in connection with the shooting death of 49-year-old Randy Nordman in Montgomery County.
Representatives for the Missouri Highway Patrol and Kansas City, Kansas, police department could not immediately be reached by The Associated Press.
The manhunt for him that included helicopters, police dogs and at least one SWAT team began late Monday after the first shooting. One of the four men managed to call police before he died, but it's unclear how the men knew each other or what may have prompted the shooting, Kansas City police officer Thomas Tomasic said.
The manhunt shifted Tuesday, when a truck Serrano-Vitorino was believed to be driving was found about 7 a.m. abandoned along I-70 in central Missouri, about 80 miles west of St. Louis.
About 25 minutes later, sheriff's deputies responded to a shooting about 5 miles away at a Montgomery County home and found the body of 49-year-old Nordman, according to the patrol. Highway Patrol Lt. Paul Reinsch said a witness who called 911 reported seeing a man running from Nordman's property, launching a manhunt of that area.
The patrol said Tuesday that Serrano-Vitorino was considered dangerous and may be armed with an AK-47.
Reinsch said investigators weren't aware of any connection between Serrano-Vitorino and Nordman, whose home is near his family's campground and a racetrack for remote-controlled cars.
Authorities haven't released the names of the four Kansas victims. Serrano-Vitorino was charged with four counts of first-degree murder in their killings, Wyandotte County District Attorney Jerome Gorman said.
U.S. Immigration and Customs Enforcement said in a statement Tuesday night that Serrano-Vitorino, of Mexico, had been deported from the U.S. in April 2004 and illegally re-entered "on an unknown date." ICE said it would place a detainer on Serrano-Vitorino if he is taken into custody.
Associated Press 2016