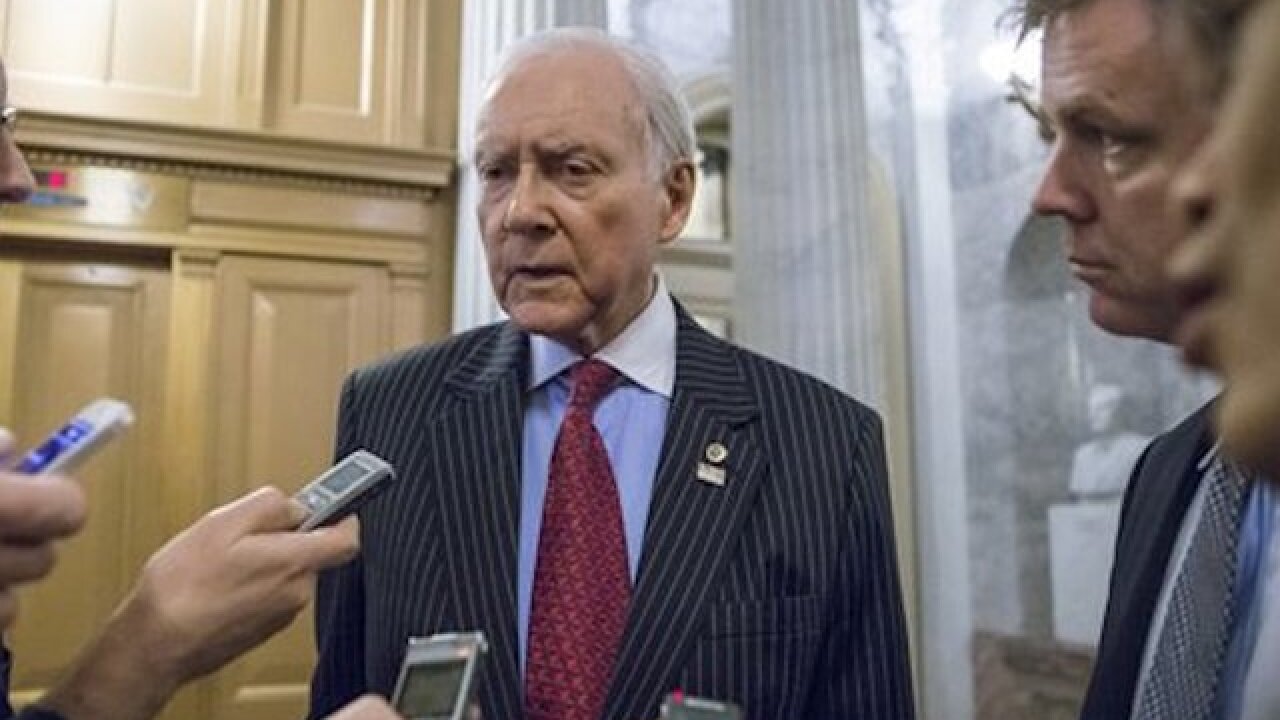 J. Scott Applewhite
<p>Senate Finance Committee Chairman Sen. Orrin Hatch, R-Utah, who also serves as the Senate's president pro tempore, speaks with reporters outside the Senate chamber on Capitol Hill in Washington, Monday, Dec. 14, 2015, as lawmakers rush to wrap up their work and pass a funding bill to avert a government shutdown. Congressional negotiators worked through the weekend on a $1.1 trillion spending bill and a package of tax breaks, with Republicans and Democrats promising that a final product will be unveiled on Monday. (AP Photo/J. Scott Applewhite)</p>

House Speaker Paul Ryan said Tuesday morning that the deal would be released later in the day and come to a vote on Thursday. That would require passage of another short-term spending bill since government funding expires Wednesday at midnight.

"I'm not going to predict how the vote count is going to go down. Look, in negotiations like this you win some, you lose some. Democrats won some, they lost some. We won some, we lost some," Ryan, R-Wis., said at a breakfast hosted by Politico. "At the end of the day we're going to get this done."

But on the Senate floor, Minority Leader Harry Reid, D-Nev., said Democrats would not relent on demands that in exchange for allowing American crude oil exports for the first time in four decades, his party wanted provisions aimed at encouraging alternative energy development and protecting Obama administration efforts to reduce greenhouse gas emissions.

"If Republicans think reducing our carbon emissions and encouraging use of alternative energy is an unacceptable price to pay, we can move the rest of the package" without lifting the oil export ban, Reid said. He added, "It's decision time."

Appearing with Ryan, Senate Majority Leader Mitch McConnell, R-Ky., avoided offering details but spoke of the benefits of a long-term deal to extend dozens of tax breaks sought by lawmakers on both sides. McConnell said such a deal would make a larger tax reform package easier to achieve next year, while satisfying business goals, including extending a research and development tax credit and a popular deduction for equipment purchases.

"Making those permanent is, I think, an important shot in the arm to our economy," McConnell said.

A major priority for the GOP and some Democrats was lifting the 40-year-old bar against exporting U.S. crude oil, a remnant of the 1970s oil shortages that industry supporters consider unneeded with today's explosion of domestic oil extraction. Critics say ending the prohibition would be a windfall to big oil companies that would damage the environment by encouraging more drilling.

Negotiators had sorted through remaining disputes over environment, labor and other provisions in a $1.1 trillion bill financing federal agencies for 2016.

The final package is expected to ignore conservative demands for language clamping down on Syrian refugees entering the U.S. Instead it would contain changes to the "visa waiver" program that allows visa-free travel to the U.S. for citizens of 38 countries, including France and Belgium, where many of the Paris attackers were from.

Also in play were about 50 lapsed and expiring business and individual tax breaks that the two sides were looking to extend, in some cases permanently. The price tag of the overall package was unclear but it could mushroom to several hundred billion dollars over a decade, which would further add to federal deficits.

"If I can play it right, both sides should walk out of here feeling pretty good," said Sen. Orrin Hatch, R-Utah, chairman of the tax-writing Senate Finance Committee.

Lobbyists said bargainers had tentatively agreed to postpone the launch of a tax on high-value health insurance plans from 2018 to 2020. There may also be a two-year pause in the existing 2.3 percent medical device tax and a one-year suspension of a levy currently imposed on health insurers, which the companies generally pass on to customers as higher premiums.

Those three taxes were boosted as part of President Barack Obama's 2010 health care overhaul to pay for the law's expanded coverage for millions of people. The administration has long resisted unraveling that statute, but there is strong bipartisan support in Congress for easing those taxes.

The two sides also were working to make some expiring business tax credits permanent in exchange for doing the same to tax breaks for children, college students and lower-earning families.