Biden talks about 'nasty' US campaign 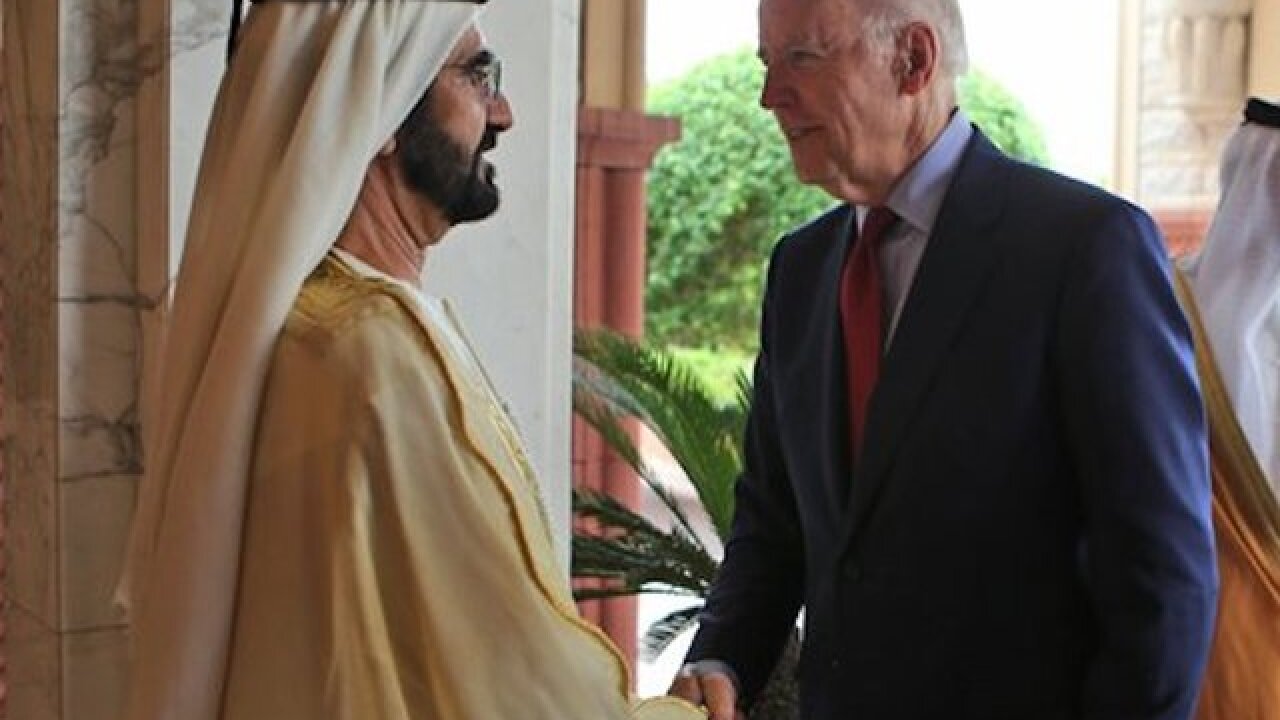 Biden, a Democrat, said self-interested lawmakers had redrawn congressional districts to the point "where the Lord Almighty could not defeat a Republican," which he said had encouraged the rise of more radical GOP candidates.

Biden told young Emiratis gathered in Dubai that such gerrymandering encourages candidates to adopt extreme positions, like saying they are going to "waterboard people ... and indiscriminately carpet-bomb" — an oblique reference to Republican candidates Donald Trump and Ted Cruz, who have vowed to use both against extremists in the Middle East.

Those gathered to listen to Biden, a mix of young Emirati men and women identified by local leaders as innovators, quietly listened and laughed at times to the vice president's hourlong talk. The meeting took place in Emirates Towers, a few floors above the offices of Dubai ruler Sheikh Mohammed bin Rashid Al Maktoum, the United Arab Emirates' vice president and prime minister.

None asked about Trump's most explosive comments for those living in the Gulf — his December statement in which he suggested banning Muslims from traveling to the United States. The GOP front-runner, whose name adorns a golf housing estate project on the outskirts of the futuristic city has been denounced by many in the region.

The United Arab Emirates, a federation of seven individual emirates ruled by powerful families, has an elected Federal National Council, but it mainly serves in an advisory role. The country's president is the ruler of oil-rich Abu Dhabi. The Emirates saw no major protests during or after the Arab Spring uprisings across the region in 2011.

Biden went on to discuss "all this chaos" caused by the Republican presidential candidates who have "gone overboard."

"The problem with American politics today is that it has become so petty, so mean," he said. "The American public are not going to let it stand."

The Emirates is one of the most important U.S. military and political allies in the Persian Gulf. Biden visited the country's Al-Dhafra Air Base on Monday, which hosts U.S. and Emirati troops battling the Islamic State group in Iraq and Syria.

Despite those close ties, the Emirates and Saudi Arabia remain concerned about Shiite power Iran's influence across the region following the deal it struck with world powers including the U.S. over its contested nuclear program. Saudi and Emirati troops are now fighting in Yemen against Shiite rebels there.

Biden met with both Sheikh Mohammed and Abu Dhabi's crown prince, Sheikh Mohammed bin Zayed Al Nahyan, on the trip. In both discussions, "terrorism" came up, according to the state-run WAM news agency, which often serves as a nod toward Iran's activities in the region by the Gulf's Sunni-ruled nations.

Biden is set to visit Israel, the West Bank and Jordan as well on his trip.