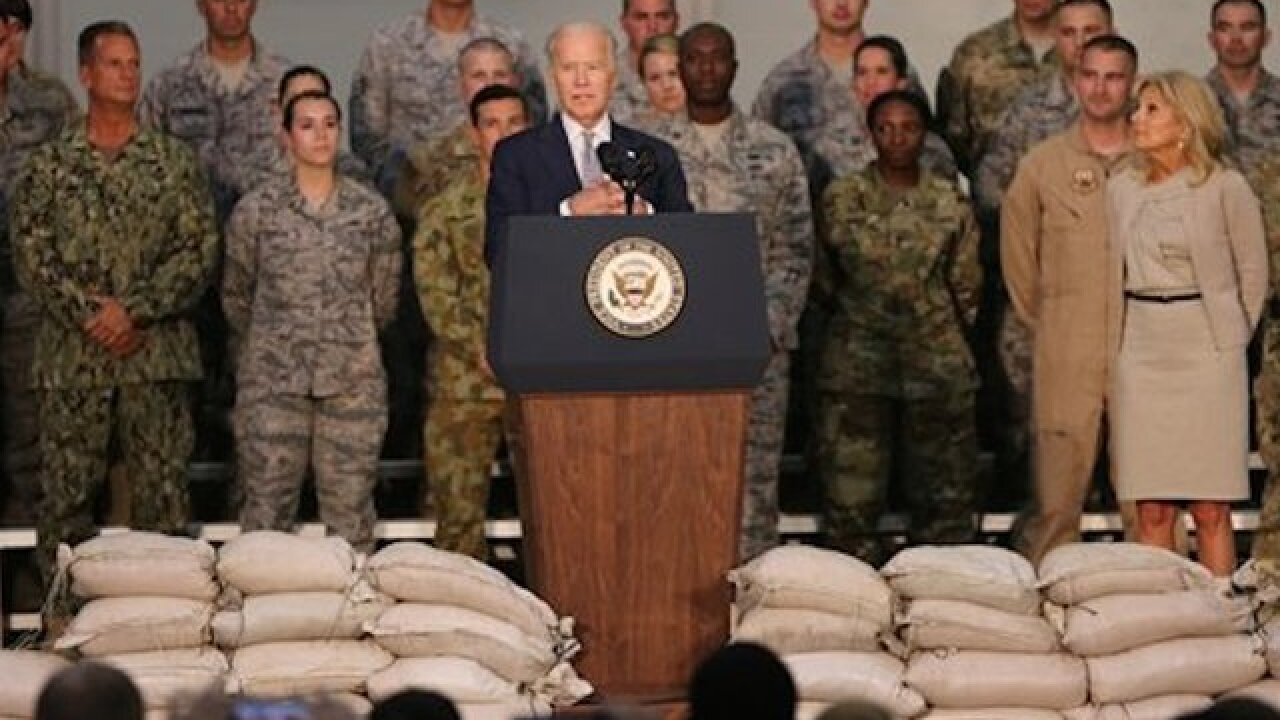 AL-DHAFRA AIR BASE, United Arab Emirates (AP) — U.S. Vice President Joe Biden began a Mideast tour Monday vowing that the United States and its allies would destroy and "squeeze the heart" of the Islamic State group, while thanking both American airmen and Emirati troops.

Biden spoke before hundreds of airmen as jets roared down the runway at Al-Dhafra Air Base near Abu Dhabi, a main launching point for operations in Syria and Iraq targeting the Islamic State group.

The Emirates is one of the most important U.S. military and political allies in the Persian Gulf. It is also a major commercial hub that includes the business-friendly port city of Dubai.

Flanked by an F-22 Raptor and an F-15E Strike Eagle fighter jet, Biden applauded Emirati authorities for their "stepped up and expanded" role in the anti-IS campaign.

"You capture the images that provide us with intelligence we need to target the enemy to protect our forces," Biden said, as unarmed drones sat and taxied on the runway outside near radar planes and refueling aircraft.

The seven-state Emirates federation, which includes the Gulf commercial center of Dubai, is one of the largest oil producers in OPEC. It hosts regional offices for numerous American companies in industries including aerospace, energy, technology and hospitality. Dubai state-owned airline Emirates is the largest operator of Chicago-based Boeing Co.'s 777 wide-body jet.

Biden's remarks, however, did not touch on the worries of Emiratis and Saudi Arabia over regional Shiite power Iran. Tensions between allied Sunni Arab countries and the Islamic Republic have been high since January, when Saudi officials executed a Shiite cleric and protesters later overran two of the kingdom's diplomatic posts in Iran.

Saudi Arabia and the Emirates also are involved in a war in Yemen against Shiite rebels there who have received Iranian support, raising fears of a regional war. This has drawn some support away from the U.S.-led coalition battling Islamic State militants.

Despite the regional challenges, Biden struck an upbeat tone, applauding the U.S. troops' sacrifices while vowing to destroy the Islamic State group, which he dismissed as "criminals and cowards."

"We have to squeeze the heart of Daesh in Iraq and Syria so they can't continue to pump their poison in the region and around the world," Biden said, using an Arabic acronym for the group.

The Emirates is the first stop on a regional tour that will also take in Israel, the West Bank and Jordan. His wife, Jill, is accompanying him.

The trip will include talks on U.S. economic and energy interests, as well as security concerns about Iran and Syria, the White House said.

Biden is not expected to offer any new initiative on the Israeli-Palestinian conflict when he travels to Israel and the West Bank. The White House has said it does not believe either side has the political will for reviving the peace process as the last year of President Barack Obama's administration winds down.

He examined a wall in the ornate mosque bearing the 99 names of God written in Arabic before stepping outside to wave at visiting tourists kept a short distance away.

Accompanying Biden on the mosque tour was its director-general, Yousif Abdallah Alobaidli, and Minister of State Reem al-Hashimi.

He later looked at a model of a desalination plant, something crucial to the Emirates, which experts warn may run out of groundwater in the next 15 years. Emirati Minister of State Sultan al-Jaber handed him a bottle of water made at the plant.

The vice president looked at it, then smiled.

"Now make sure I'm still standing," he said. "Watch what happens when I take the first sip. I'm more energized."

Biden took a drink, paused for a moment and added: "Do you need a partner? I'm out of a job soon."