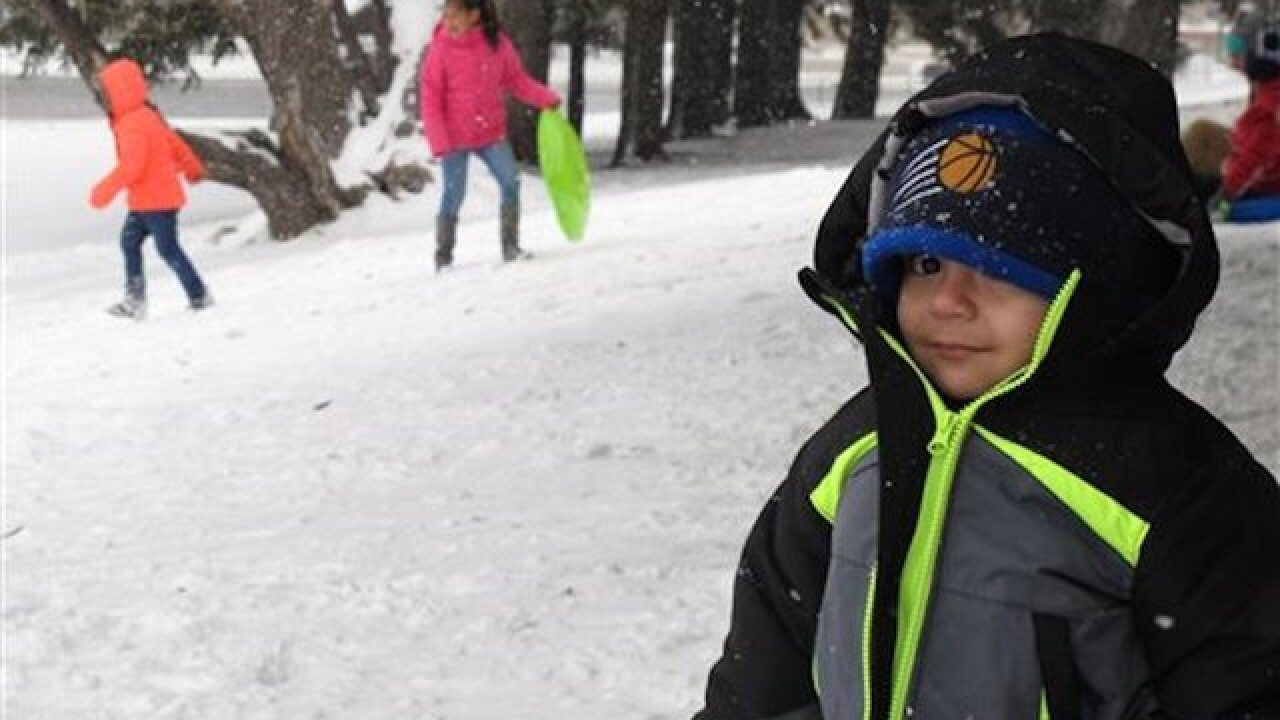 A wintry chill was taking hold Tuesday in the Southwest, where forecasters warned of freezing temperatures in the desert and wind that could kick up freshly fallen snow in mountainous areas.

The chilly predictions follow storms that moved across the West this week and dumped several inches of snow in northern Arizona, while leaving behind more than a foot in Wyoming and Montana.

The Salt Lake City area had its first major winter storm Monday with highway troopers reporting hundreds of accidents and slide-offs as nearly one foot of snow blanketed northern Utah.

In Arizona, temperatures Tuesday and Wednesday in the community of Bellemont, near the mountain city of Flagstaff, likely will be sub-zero with surrounding areas below freezing and dry, said National Weather Service meteorologist David Vonderheide.

"Just plain cold," he said. "People wanting to get out to work that morning, it's just going to be frigid."

Arizona's desert areas, including Phoenix, Tucson and communities in the western part of the state, will experience rare freezing temperatures. Forecasters have issued hard freeze and freeze watches for those areas. They said sensitive plants will die and pets could suffer from frostbite or hypothermia if not brought inside.

The snow remained a big draw for people who live outside Flagstaff. Residents and visitors lobbed snowballs at each other, made snow angels and raced down a popular sledding hill Monday.

Nathan Smallridge brought his two children to Flagstaff from Las Vegas, a yearly tradition initiated by the snowfall.

"It's beautiful because we don't get snow in Las Vegas," he said.

Skiers and snowboarders delighted in the additional snow that fell in the Sierra Nevada on Sunday.

However, the snowfall made for a messy commute in Utah and Arizona. Authorities urged motorists to stay off major highways if possible and said gusty winds could send snow swirling, further complicating travel.

As much as 16 inches of snow was expected by Tuesday in parts of Utah. Many streets in the Salt Lake City-area were littered with cars stuck in the snow, causing backups and gridlock at some stoplights. The Hogle Zoo in Salt Lake City closed and the University of Utah in Salt Lake City cancelled evening classes.

In Colorado, a storm packing snow and cold temperatures also slowed down drivers, closed schools in the Denver area and delayed flights at Denver International Airport by an average of 1 1/2 hours on Tuesday. Up to 10 inches of snow are expected in parts of northeastern Colorado by Tuesday afternoon.

Some schools in New Mexico were also closing or delaying openings because roads remain icy.

In South Dakota, many schools including those in Rapid City are shut down in anticipation of the approaching storm.