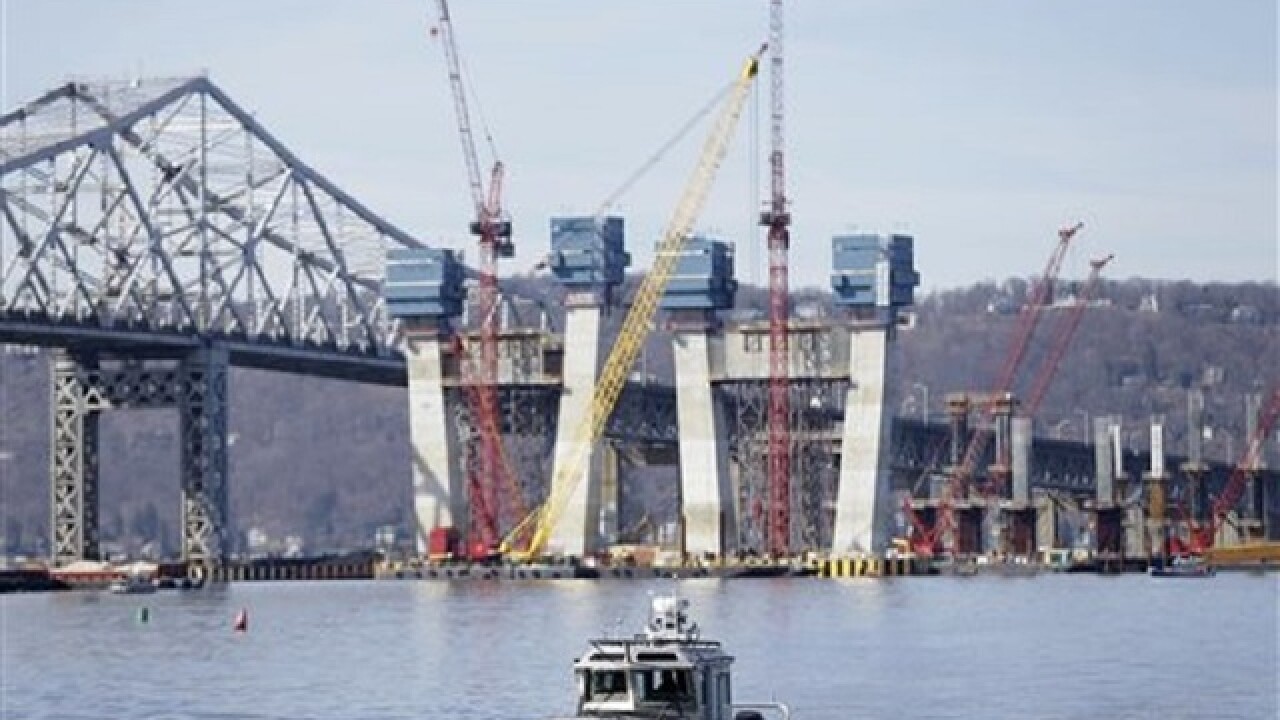 Seth Wenig
<p>A New York State Police boat passes near the site of a fatal collision in the water underneath the Tappan Zee Bridge in Tarrytown, N.Y., Saturday, March 12, 2016. A tugboat crashed into a barge on the Hudson River north of New York City early Saturday killing at least one crew member and leaving two still missing. (AP Photo/Seth Wenig)</p>

NEW YORK (AP) — The body of a second tugboat crew member who went missing after the boat crashed into a barge on the Hudson River north of New York City has been pulled from the river, authorities said Sunday afternoon.
The 90-foot tugboat named Specialist hit a barge early Saturday morning near where the new Tappan Zee Bridge, which connects two counties north of New York City, is being built. The tugboat sank, spilling about 5,000 gallons of fuel into the water, authorities said.
The body has been identified as Timothy Conklin, 29, of Westbury, Long Island, New York. His body was brought back to shore after divers found him inside the tugboat around 11 a.m. Sunday.
The third crew member aboard the tugboat when it crashed has been identified as Harry Hernandez, 56, of Staten Island, New York. He remains missing and drivers were expected to resume searching for him later Sunday afternoon, said Westchester County police spokesman Kieran O'Leary.
The tugboat was damaged to the point that a full search was not possible, he said.
The body of Paul Amon, 62, of Bayville, New Jersey, was pulled from the water Saturday. Attempts to reach his family were not immediately successful.
Authorities said three tugboats were pushing a barge from Albany to Jersey City, New Jersey, when one of the three — situated on the right side as it headed south — hit a stationary barge that was part of the Tappan Zee Bridge construction project. A tugboat on the left side of the barge that was being pushed, as well as one that was pushing the barge from the rear, were not involved in the accident.
Authorities believed the sunken tug is wedged directly underneath the barge it struck at the mid-span of the bridge.
Cuomo said he had been "hoping for a miracle" that the men would be found alive.
"But if we don't have a miracle, three lives will be lost," he said. "You keep your fingers crossed, but the more time that goes on, obviously the bleaker the prospects for survival."
Cuomo said in a statement that 21 workers were on the bridge construction barge that was hit, but none of them was injured. He said it appeared the workers realized the barge was about to be struck and braced for impact. He added the construction barge was illuminated at the time of the pre-dawn collision.
The accident occurred near the center of the existing Tappan Zee Bridge, and the Specialist sank in about 40 feet of water within minutes, authorities said. The water temperature in the area was about 40 degrees, according to the U.S. Geological Survey.
Cuomo said a team from the state Department of Environmental Conservation was on site with a private contractor and were deploying booms to contain the leaking diesel fuel. He said he did not expect any "long-term damage" as a result of the spill.
James Mercante, an attorney for the owner of Specialist, said the crew was licensed, competent and experienced personnel.
"It's a shocking, horrific marine tragedy," Mercante said right after the crash. "Right now the company is more concerned with the families of the crew and mourning."
A spokeswoman for Tappan Zee Constructors, a consortium of companies building the new bridge, said the company is cooperating in the investigation.
The crash occurred near the scene of a 2013 boat crash that killed a bride-to-be and her fiancé's best man.
The new bridge is to replace an adjacent aging span that now connects Westchester and Rockland counties. Construction on the $3.9 billion project began in October 2013 and is expected to be completed by 2018.
Associated Press 2016