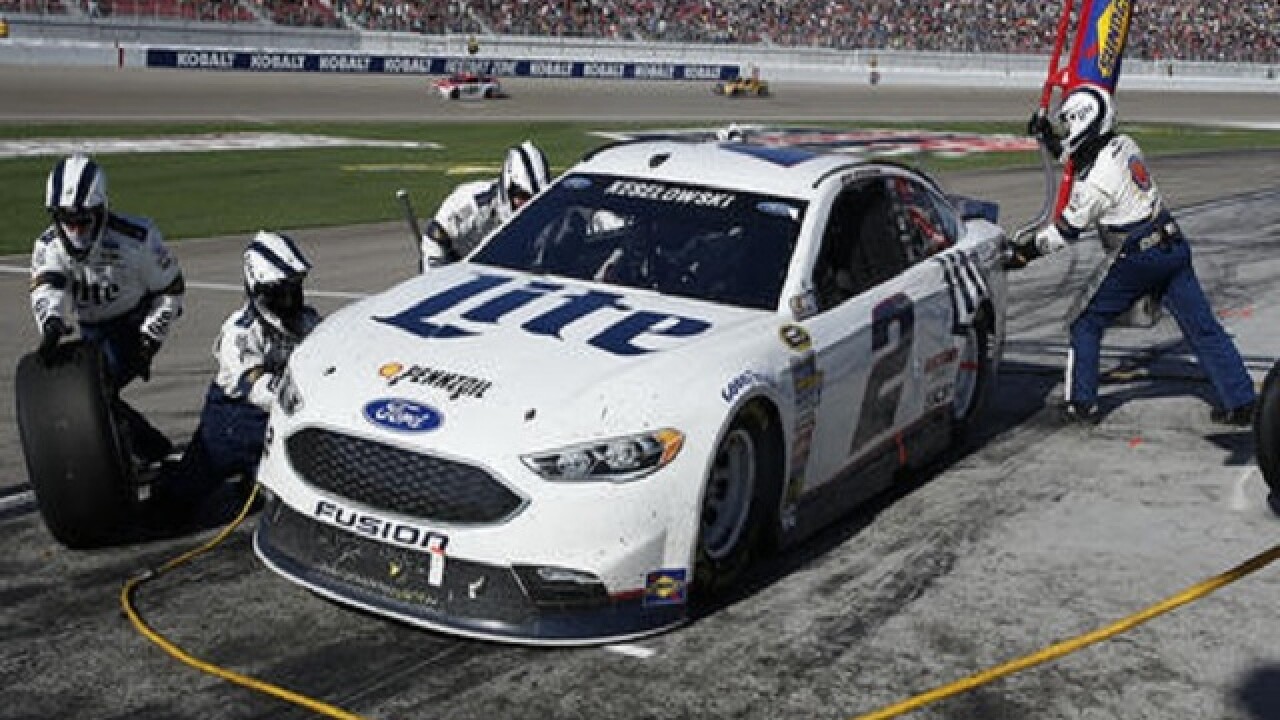 By: Associated Press
Posted at 9:59 PM, Mar 06, 2016
LAS VEGAS (AP) — Brad Keselowski spent nearly a full year winless and watching while Team Penske teammate Joey Logano went to Victory Lane five times.
Keselowski had to drive through wind, rain, sand and Logano himself to finally hit it big in Vegas again.
Keselowski passed Kyle Busch with five laps to go Sunday and surged to his second win in three years in the NASCAR race at the Las Vegas Motor Speedway under weird and windy weather conditions.
After getting past Logano and tracking down Busch, whose right front wheel vibrated and struggled down the stretch, Keselowski drove his Ford to his first Sprint Cup Series victory since Fontana in March 2015.
"For Team Penske, it's our 50th anniversary," Keselowski said. "To get the first win of the year, it feels real good."
Keselowski had to gamble on fuel late, and he thought he had blown the race earlier with a speeding penalty. The risks paid off for the 2012 series champion, who claimed he hadn't been dwelling on his winless skid over the past year.
"It's hard to believe it's been 34 races," Keselowski said. "We've led a lot of races in that time span. Probably deserved to win a few more races than that. ... There was a lot of misfortune, and then there was a lot of self-inflicted things that I could have done better and beyond. But I can't sit here and dwell on that."
Logano finished second and Jimmie Johnson came in third in the opener of NASCAR's three-week Southwest swing. Busch finished fourth, falling a few laps shy of completing a weekend sweep after dominating the Xfinity Series race Saturday.
Logano fought Keselowski tenaciously for position, but they emerged from the duel smiling.
"It took a long time to get by Joey," Keselowski said. "He put up a heck of a fight. If anyone ever wants to say that your teammates just lay over and give it to you, that's not how we are at Team Penske. We race each other hard but clean. That was really something to see."
Keselowski didn't pit with the leaders with 52 laps left, managing to make his fuel last with enough caution laps. He also persevered through a lurking storm that blew gale-force winds and light rain onto the desert track.
The wind regularly blew debris into the drivers' grills, getting pole-sitter Kurt Busch and Kyle Larson in the opening laps. Later, the wind picked up sharply while a dust storm rose on the outskirts of the track, obscuring the view of nearby Nellis Air Force Base and briefly dropping more rain.
"I guess that's the Wild Wild West, right?" Logano asked. "It was just dusty, grainy, windy. Crazy."
Busch appeared to be in good shape with an artful move to get in front and a strong restart late. But the Vegas native reported problems with his wheel, and Keselowski eventually surged in front to stay.
"(Busch) had a really good short-run car, but it fell off on the long run," Keselowski said. "That is part of this new (low-downforce) package. Some are good on short run and some are good on long run, and we had a really good long-run car today."
WHO'S HOT: Ryan Blaney was the top rookie, finishing sixth in his Wood Brothers Racing Ford. He sits 14th in the Sprint Cup standings.
WHO'S NOT: Denny Hamlin dropped back to 19th after starting in ninth, unable to make any progress up the field. He sits eighth in the Sprint Cup standings after three races. "What a miserable day," he tweeted. "We will learn and get better."
BAD BREAK: Matt Kenseth spun into Chase Elliott in a late wreck that sidelined both cars. Kenseth couldn't explain what caused his wreck with Elliott, but he noticed the wind gusts picking up off the restart. Kenseth, who said he "spun out before I had any idea what happened," continued his rotten run of luck in a season that he began by losing the Daytona 500 on the last lap.
PARITY: All three manufacturers have a Cup win through the first three races: Toyota and Joe Gibbs Racing won at Daytona, while Johnson paced Chevrolet and Hendrick Motorsports to victory at Atlanta before Keselowski won for Ford and Team Penske at Las Vegas.
THE CHAMP IS HERE: New UFC bantamweight champion Miesha Tate attended the race about 15 hours after her victory over Holly Holm on the other end of the Las Vegas Strip. Tate cheered on defending Vegas champion Kevin Harvick, whose company manages her career. Harvick finished seventh. "I was glad I was able to make it here," Tate said. "I had so much going on this morning, but I didn't want to miss this race for anything."
UP NEXT: Phoenix International Raceway. Kevin Harvick won the March race last season, and Dale Earnhardt Jr. won on the same track in November.
Associated Press 2016