Brazil pushes on with Olympic planning 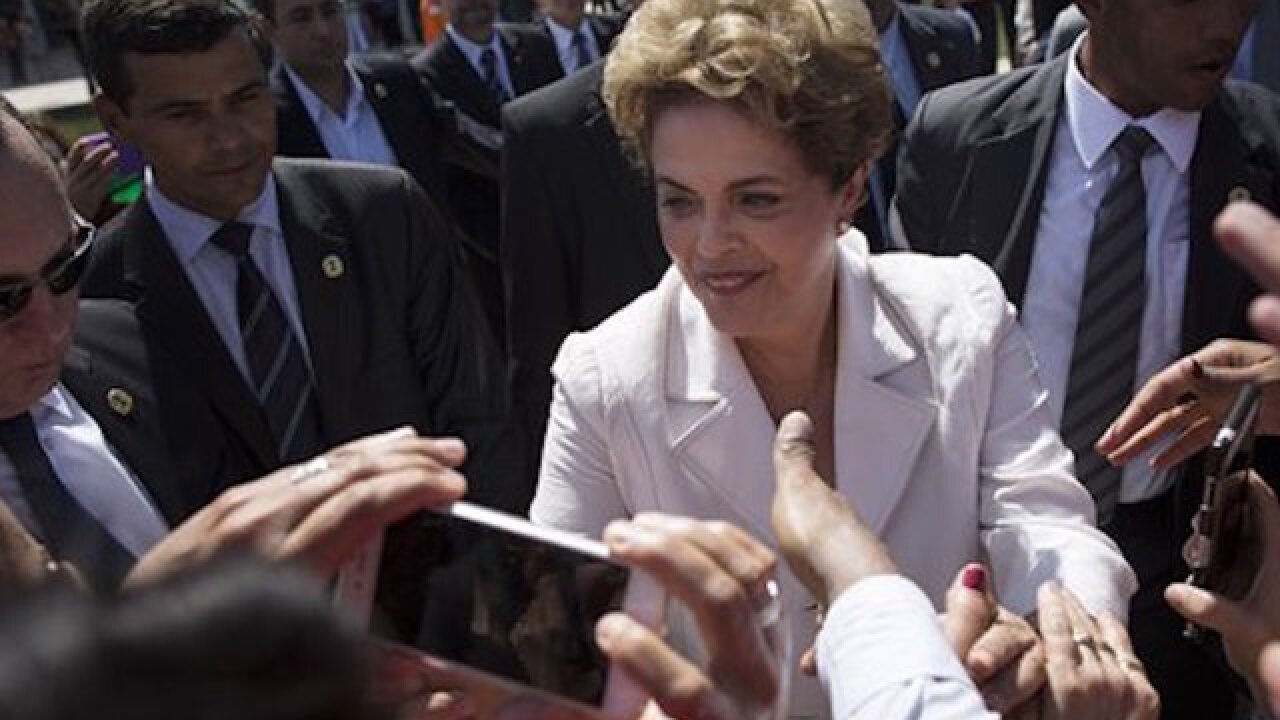 Copyright Associated Press
Felipe Dana
<p>Brazilian President Dilma Rousseff greets supporters as she leaves the Planalto presidential palace in Brasilia, Brazil, Thursday, May 12, 2016. Speaking hours after the Senate voted to suspend her on Thursday, Rousseff blasted the impeachment process against her as "fraudulent" and promised to fight what she characterized as an injustice more painful than the torture she endured under a past military dictatorship. (AP Photo/Felipe Dana)</p>

RIO DE JANEIRO (AP) — The venues are, in the words of organizers, 99 percent ready. The torch is winding its way around the country in a three-month relay ending at the opening ceremony.

Even if the country is preoccupied with the impeachment of President Dilma Rousseff, organizers insist the Olympics won't be touched by the ongoing political turmoil.

Will that bear out? Stay tuned.

"The organization of the games is absolutely following the right path," Carlos Nuzman, head of the organizing committee, said Thursday. "And it will continue the same way."

Will a change in the country's chief executive cause more problems as the calendar ticks down to Rio? What about the effect of the country's rotating sports leadership?

One of the first acts of interim president Michel Temer was to appoint Leonardo Picciani the new sports minister, the second in two months and the fourth in two years.

"This will at least give Olympic organizers someone to talk to," said Sergio Praca, a Brazilian who studies politics at the Getulio Vargas Foundation. "This lack of command is very bad."

Temer is almost certain to represent Brazil and declare the games "open" on Aug. 5 at the Maracana Stadium, though organizing officials said he would not give a speech. Rousseff was jeered two years ago when she spoke at the opening of the World Cup.

Traditional Olympic protocol calls for Nuzman and International Olympic Committee President Thomas Bach to do the speaking, lauding the games and the country.

Even if the impeachment battle temporarily tapers off with Rousseff's suspension, Rio still faces myriad problems, making South America's first Olympics the most contentious in decades.

Brazil is mired in the deepest recession since the 1930s, and it's at the epicenter of the mosquito-borne Zika virus, which has been proven to cause birth defects in newborn babies.

The country is also gripped by a $3 billion corruption scandal at state-run oil giant Petrobras with many of the same construction companies working on Olympic projects.

Other worries include slow ticket sales, $500 million cuts to balance the operating budget, and the death of two men last month when a newly built Olympic-legacy bike lane collapsed into the sea.

The state of Rio de Janeiro has also chopped $550 million from its security budget (about 20 percent), a big worry since the state will provide about 65,000 of the 85,000 police and soldiers to patrol the games.

"It's undeniable that Brazil is in a very serious crisis," former Barcelona soccer great Romario, now a federal senator, said Wednesday during the impeachment vote. "No magic tricks will take us from this quagmire immediately."

In a statement Thursday, Bach said the IOC looks "forward to working with the new government to deliver successful games in Rio this summer."

The IOC guides local organizers, providing templates from other games, timelines and expertise. A team of IOC inspectors made their final official visit to Rio a month ago, saying things were in place.

"Despite the hardships and hard economic conditions, they are on target," inspection team member Patrick Hickey of Ireland told the Associated Press. "It's going to be a different games but it will work."

Even with the upbeat mood, Praca — the political analyst — said Brazil was apathetic toward the Olympics. The country is predicted to win about 25 medals this time — its best-ever showing and cracking the top 10 — but Olympic interest pales alongside soccer's World Cup.

There is little evidence across Rio that the games are near; no advertising, few signs of Olympic paraphernalia and little talk about it.

"The Olympics have always been a very secondary thing, like something that happened between World Cups," Praca said. "I just don't really see people getting geared up for it like they do the World Cup."

He said the indifference reduced the chances for protests with the 10 percent unemployed — and 10 percent inflation — unlikely to blame the games for their woes.

"At the Olympics, unlike the World Cup, you have a lot of events going on simultaneously," Praca said. "At the World Cup it was basically one game, one venue and an easy target to focus attention."