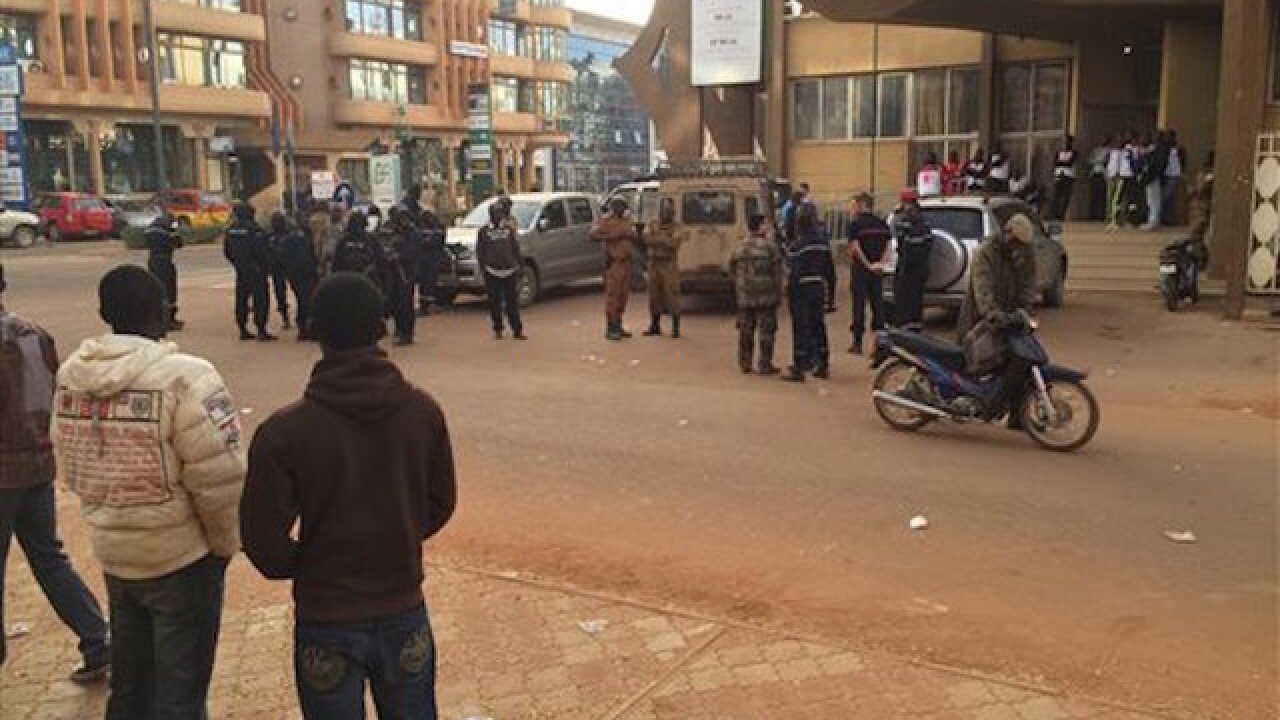 Copyright Associated Press
Ludivine Laniepce
<p>Security forces gather near the Hotel that was attacked by suspected militants in Ouagadougou, Burkina Faso, Saturday, Jan. 16, 2016. Burkina Faso and French forces rescued more people from a luxury hotel in Burkina Fasoís capital as they worked to take back the blackened building early Saturday, exchanging heavy gunfire with al-Qaida militants who had seized it the night before. (AP Photo/Ludivine Laniepce )</p>

At least 23 other people from up to 18 different countries were killed in the attack at the Splendid Hotel and nearby Cappuccino Cafe, establishments popular with westerners in Ouagadougou, the capital, he said. Three attackers were killed at the hotel and a fourth was killed when security forces cleared out a second hotel nearby.

Two of the three attackers at the Splendid Hotel were identified as female, President Roch Marc Christian Kabore said on national radio.

"We appeal to the people to be vigilant and brave because we must fight on," said the president when praising the security forces and first responders. He also said the country was grateful for the military cooperation from French and Americans.

The Islamic extremists stormed the hotel and cafe Friday night. A young black woman with dreadlocks and young Arabs entered the cafe shouting Allahu akhbar (Arabic for God is great), said Issouf Ouattara, who was at the cafe where 10 people were killed in the gunfire.

"There was general panic. After about 20 minutes the situation calmed down and then the firing started again and I think this time it was the police," said another witness Inoussa Diarra.

"We tried to evacuate the victims because they were a bit hidden all over," witness Patrick Nikiema told regional news agency Juka Africa.

Gunfire ramped up early Saturday as gendarme and military forces fought to take back the building which had been blackened by a fire during the assault. Burned cars and motorbikes and overturned chairs and shards of glass lay scattered near the hotel. Onlookers were kept far away from the fighting that continued into daylight.

"We know that the gunmen won't get out of the hotel alive. Our country is not for jihadists or terrorists. They got it wrong," said Gilbert, a witness who gave only his first name

After the morning call to prayer signaled a new day in this West African nation, security forces took control of the Splendid Hotel they searched nearby hotels for other extremists in hiding. The search continued after security forces found and killed a fourth extremist at the Hotel Yibi, the president said.

About 33 people were wounded, said Minister of Security and Internal Affairs Simon Compaore.

The harrowing attack was launched by the same extremists behind a similar siege at an upscale hotel in Bamako, Mali in November that left 20 dead.

Dozens of French forces arrived overnight from neighboring Mali to aid in the rescue. One U.S. military member was embedded with French forces at the scene, and the United States was working to help provide France with surveillance and reconnaissance help, according to a U.S. senior defense official who spoke on condition of anonymity because he was not authorized to discuss the matter publicly.

An al-Qaida affiliate known as AQIM, or al-Qaida in the Islamic Maghreb, claimed responsibility online as the attack was ongoing in downtown Ouagadougou at the 147-room hotel, according to the SITE Intelligence Group.

In a message posted in Arabic on the extremists' "Muslim Africa" Telegram account, it said fighters "broke into a restaurant of one of the biggest hotels in the capital of Burkina Faso, and are now entrenched and the clashes are continuing with the enemies of the religion." Fighters who spoke by phone later "asserted the fall of many dead Crusaders," AQIM said, according to SITE.

In a separate development, an Austrian doctor and his wife were kidnapped Friday night by extremists in Burkina Faso's north near its border with Mali, Abi Ouattara, security ministry spokeswoman, said Saturday. Jihadis took the two from the town of Baraboule in the Soum province in Burkina Faso's Sahel region, Ouattara said. The two were doing volunteer work, but the spokeswoman said it was not immediately known how long they had been in northern Burkina Faso.

There was no immediate confirmation of the kidnapping from Austria's Foreign Ministry. "We are trying to look into the matter as quickly as possible," spokesman Thomas Schnoell told the Austria Press Agency.

Burkina Faso, a largely Muslim country, had for years been largely spared from the violence carried out by Islamic extremist groups who were abducting foreigners for ransom in neighboring Mali and Niger. Then last April, a Romanian national was kidnapped in an attack that was the first of its kind in the country.

Burkina Faso has also experienced political turmoil since its longtime president was ousted in a popular uprising in late 2014. Last September members of a presidential guard launched a coup that lasted only about a week. The transitional government returned to power until Burkina Faso's November election ushered in new leaders.

The hotel attack in Mali in November was also claimed by a leader of AQIM, who said it had been carried out as a declaration of unity with Algerian militant Moktar Belmoktar's extremist group Al-Mourabitoun, according to an audio speech that was distributed by SITE at the time. Belmoktar was a former leader in AQIM before starting his own group, which now has merged back with al-Qaida.