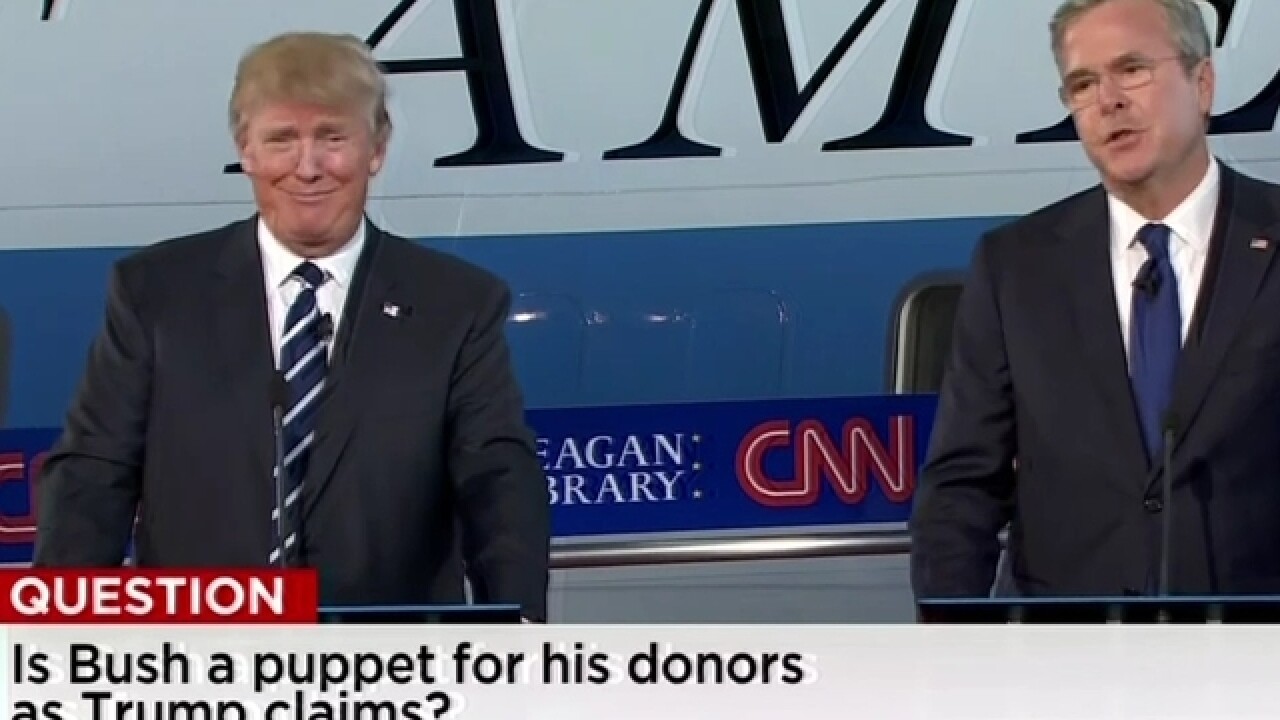 CONTOOCOOK, N.H. (AP) — Days after going toe-to-toe with Donald Trump on the debate stage, Jeb Bush seemed to relish his new role as the Republican front-runner's chief critic while campaigning on Saturday in New Hampshire.

"I've got to get this off my chest: Donald Trump is a jerk," Bush said, unprompted, between answering two voters' questions. Then he slammed the billionaire businessman for insulting women, Hispanics and people with disabilities during the campaign.

"Who is he kidding?" Bush asked the crowd. "I gave myself therapy there. Thank you for allowing me to do it," he admitted, half-jokingly.

Bush's frustrations with Trump are not surprising. Once considered the establishment favorite for the party's nomination, Bush's policy-heavy campaign has been sagging for months and failing to break into the double digits in preference polls. Trump, by comparison, continues to dominate the field, seemingly becoming stronger with each new, inflammatory statement he makes, the latest calling to ban Muslims from entering the country.

Bush isn't the first GOP presidential candidate to swing at Trump. Ohio Gov. John Kasich and an outside group backing him, for example, have attacked Trump for months in press releases and digital advertisements. But as Bush engaged repeatedly with Trump in Tuesday's debate, Kasich largely avoided taking on the real estate mogul.

Bush, for his part, says he's stepping up his criticism on Trump now because Trump is displaying shallow ideas on foreign policy.

"Did you hear him talk about foreign policy in the debate?" Bush said, referencing Trump's garbled answer on modernizing the nuclear triad. "He has no clue."

Of Vladimir Putin, Bush said, "he will respect strength, not a clown show."

Trump leads the polls in New Hampshire, where success in the Feb. 9 primary could make or break Bush's ability to continue running. Bush is competing with Kasich, New Jersey Gov. Chris Christie and Florida Sen. Marco Rubio to carry the party's establishment mantle. And he's casting his decision to go after Trump, in part, as a move to save the Republican party.

"The idea that he's actually running for president and insulting people is deeply discouraging to be honest with you, and we should reject that out of hand," Bush said. "A guy like that should not be the front-running candidate of our great party — that is not how we win."

It's a welcome approach to some New Hampshire voters.

"It's really important for New Hampshire to send a message that we don't want Trump or (Texas Sen. Ted) Cruz to take over the Republican party," said Dick Beyer, a self-described moderate Republican who saw Bush on Saturday morning.

Still, Bush has a long way to climb. A voter asked Bush if he could show in the rest of his campaign the same passion he shows in town halls, a worry perhaps stemming from Trump's early branding of Bush as "low energy." Another voter asked Bush how he'd go about defeating Trump.

That, Bush said, is ultimately up to the voters. And he suggested the wrong choice could hurt the state's first-in-the-nation primary.

"You're the answer," Bush said. "The question is, will New Hampshire want to support a guy who might tarnish this extraordinary status that you have."