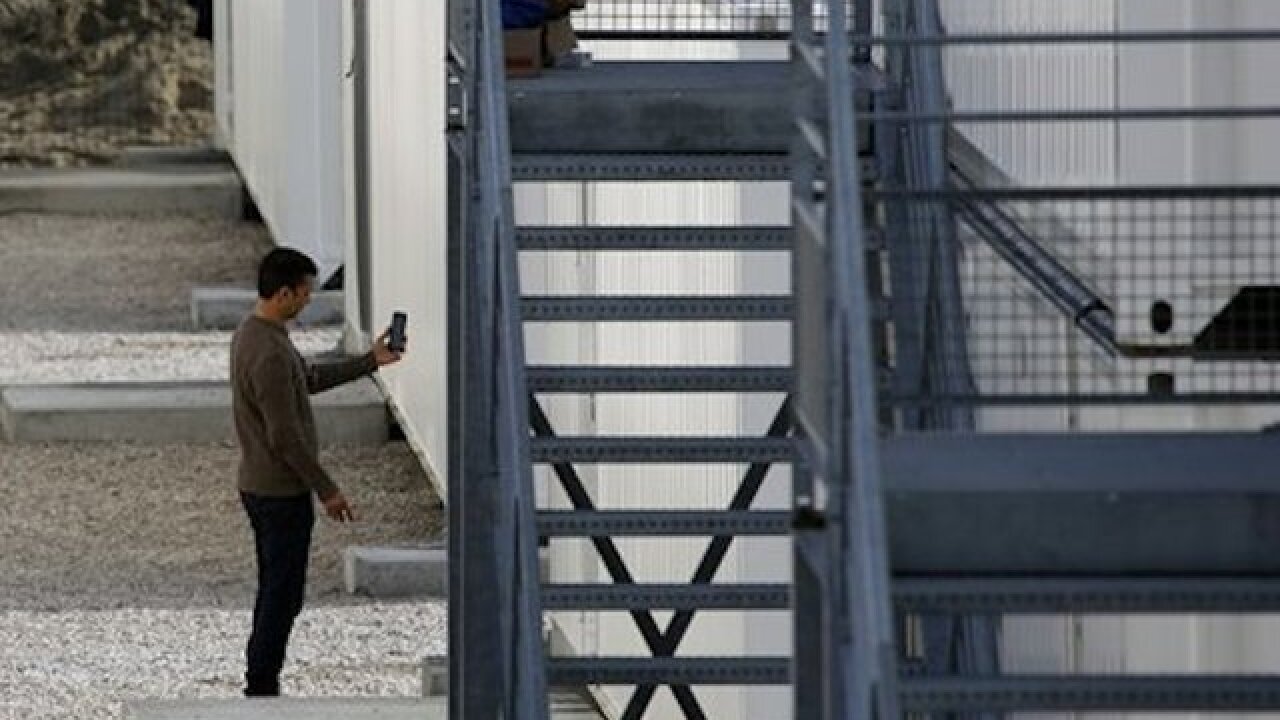 Copyright Associated Press
Jerome Delay
<p>A migrant looks for signal between containers set to replace a makeshift migrant camp near Calais, France, Thursday Feb. 25, 2016. The clock is ticking for hundreds of migrants waiting for a judge to decide whether to postpone an eviction order in the camp locally referred to as "the jungle". (AP Photo/Jerome Delay)</p>

CALAIS, France (AP) — A French court on Thursday gave the state the green light to raze tents and lean-tos sheltering hundreds of migrants in a sprawling slum camp in Calais, where thousands dream of getting to Britain.

The camp in the northern port city — known as the "jungle" — has been an embarrassing and often shocking chapter in Europe's migrant crisis, and the state announced this month that the densely populated southern half would be razed.

Associations protesting the move took the issue to court seeking a postponement of a deadline reached last Tuesday for migrants to move out.

The court in Lille ruled that the makeshift shelters used by the migrants can be destroyed — but that common spaces like places of worship, schools and a library must stand.

Demolition crews have been poised to start what officials say will be a better solution for migrants trapped in Calais with borders all but sealed by increasing security.

Officials estimate the number of migrants who will be affected at 800-1,000. Humanitarian organizations say over 3,000 migrants live there.

Moving the migrants out of the mini-slum will be the most dramatic step by the French state to end Calais' years-long migrant problem, which has transformed the northern city into a high-security tension point, fueled far-right sentiment and defied British and French government efforts to make it go away. Critics contend that closing the camp may not solve the problem.

The same court in Lille ordered the state in November to clean up the camp by adding running water, toilets and garbage bins, and counting the number of minors without families — now 326 — and help those in distress.

Saving the migrants' temporary homes from bulldozers became a mass effort by volunteers, humanitarian groups and a dose of star power. British actor Jude Law paid a visit last weekend and 260 French figures signed a petition against destroying the camp.

In announcing plans to close the camp, authorities cited security and sanitation concerns and the increasingly tarnished image of Calais, a city of nearly 80,000 takes pride in drawing tourists to its Opal Coast. Its prime location — with a major ferry port, Eurotunnel rail system and truck traffic crossing the English Channel — has put it in the crosshairs of the migrant crisis.

Residents have mostly learned to live with migrants in their midst. But tensions rose when the camp's population spiked to 6,000 last fall before dropping to 4,000 more recently.

An increasingly vocal backlash is punctuated by militia-style violence. Truckers have grown exasperated or fearful of increasingly bold tactics by migrants trying to sneak rides across the English Channel.

The area targeted for destruction is dotted with rickety shops, cafes, places of worship and schools, built by aid groups and the migrants, most of whom traveled from conflict zones like Syria, Iraq or Afghanistan, or came to escape human rights abuses or poverty in African nations.

A sense of anxiety mounted in the camp ahead of the court ruling.

"Obviously, they are scared and concerned about what is going to happen," said Ed Sexton, of Help Refugees, one of numerous British associations working in the camp. "The people have been here months, living in terrible conditions, but they don't want their shelters destroyed."

Weary travelers come to Calais driven by a dream — circulated among migrants, peddled by smugglers — that they will find peace and prosperity in Britain. Lacking papers, they have to sneak across the Channel, and at least 20 migrants have died trying since late June, according to local authorities.

Camp residents were offered the choice of being sent to temporary welcome centers around France, or staying in one of 125 heated containers set up last month in a fenced-in area behind the camp.

"It's inhuman to live in the jungle. But certain associations, certain billionaire stars are telling us to leave things alone," the head of the region, conservative Xavier Bertrand, said during a visit last weekend. "That's enough. The jungle must be evacuated."

Humanitarian workers predicted that those who refuse to leave would shelter in small groups elsewhere around Calais and the coast.

"You're basically going to scatter a lot of people," said Maya Konforti of the association Auberge des Migrants.

An Afghan who identified himself only as Jan said he would look elsewhere for a shelter if Calais were closed.

"They are the government ... we can't fight with them," he said.

Nearby Belgium, concerned about an influx of Calais evacuees, has implemented border checks.

Another filthy camp known as a haven for smugglers, near Dunkirk, France, is being relocated to a more hygienic site with heated tents under the supervision of Doctors Without Borders.

The prefecture, which announced plans to raze the camp on Feb. 12, said bulldozers would not touch the camp's makeshift churches, mosques and a just-opened school. Facing criticism of the eviction order, Interior Minister Bernard Cazeneuve softened the ultimatum this week, saying the evacuation would be "progressive."

Authorities view the razing of much of the camp as a turning point for Calais, but that's a far from certain outcome.

A Red Cross-run camp in nearby Sangatte — used during its three-year existence by some 68,000 refugees — was shut down in 2002. Afterward, hundreds moved up the coast to set up small camps around Calais.

Authorities periodically razed them, then opened a state-sponsored day center in April with showers, plugs to charge phones and a meal distribution center. That lured migrants chased from inside the city, who pitched camp nearby.

Authorities allowed the camp to grow, and it evolved into a squalid slum town with some amenities of urban life that injected a sense of solidarity and conviviality into migrants' bleak lives.