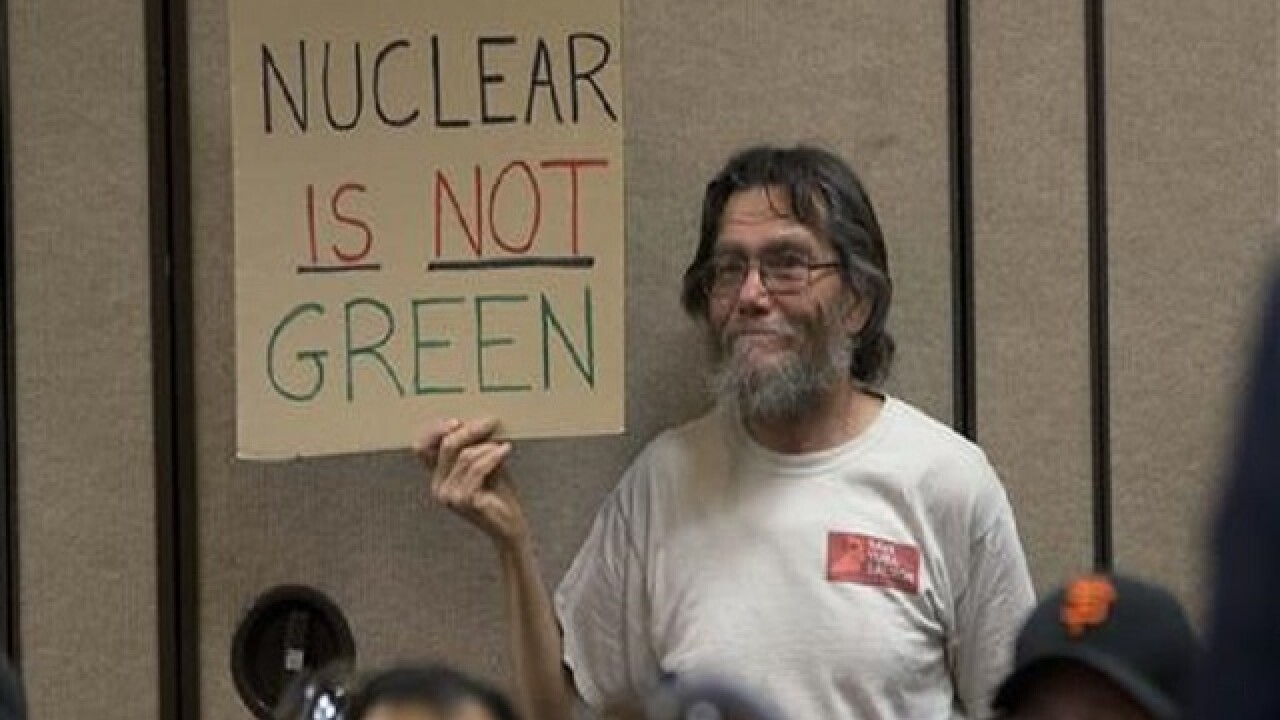 SACRAMENTO, Calif. (AP) — California land officials dropped their longstanding environmental objections to the state's last nuclear power plant and signed off Tuesday on a deal to close the Central Coast facility nearly 20 years ahead of its previously planned termination.
The State Lands Commission approved a lease allowing Pacific Gas and Electric Co. to continue operating the Diablo Canyon twin-reactor plant through August 2025, a date the company and environmental groups agreed to last week. Members turned down a proposed environmental impact assessment, which can take years, in part to meet the earlier termination date.
Lt. Gov. Gavin Newsom said keeping the plant open for nine years allows PG&E to avoid the mistakes of Edison International, which terminated its San Onofre nuclear generator in 2013 after hundreds of abrupt layoffs. The company largely replaced the nuclear power with climate-changing natural gas plants.
"Let's not fail the plant," Newsom said. "Let's have the conversation now about what that means to the workforce, what that means to the community, what that means to our efforts to provide alternative energy sources at a competitive price."
Tom Dalzell, business manager of a union that represents 600 of the plant's employees, said the agreement promises to retrain and transition employees away from Diablo Canyon, avoiding a precipitous change.
Friends of the Earth President Erich Pica, whose organization participated in the negotiation to terminate the plant, said the agreement is fair to workers while eliminating two decades of seismic risks.
"This is the way you do it," Pica said. "You have time, you can bring on the right resources and you can treat people right."
Not all conservationists back the plan, though. Dozens of activists, including some who have been fighting nuclear energy for 40 years, argued Tuesday against the plant's continued operation near major earthquake-causing fault lines.
John Geesman of the Alliance for Nuclear Responsibility said the state should have conducted one of its strict environmental reviews before approving the lease, however short.
Geisha Williams, PG&E president of electric operations, said the nine years are a gift and the company will use the better part of that time to build and prepare an alternative energy facility in California.
Williams said PG&E could pivot to wind, solar, biomass, geothermal or hydropower to replace the energy Diablo Canyon currently provides — about 9 percent of the state's power.
PG&E President Tony Earley told reporters last week the utility will save more money closing Diablo Canyon than running it through 2044 as planned.
The commission's vote is the first of multiple regulatory hurdles facing the agreement to shut down the 31-year-old plant.
Diablo Canyon's twin reactors hug a Pacific Ocean bluff midway on the coast between Los Angeles and San Francisco, in San Luis Obispo County.
Fears about the seismic faults running through the area have dogged the project since its conception in the 1960s, and fostered opposition nationally to nuclear power within the country's then-fledgling environmental movement.
PG&E maintains the plant could withstand the strongest likely earthquakes, but growing scientific knowledge about the seismology has heightened worries.
The state's largest utility and environmental groups agree that California no longer needs the electricity from Diablo Canyon, given increased energy efficiency in the state and the growing availability and affordability of solar and wind power and other renewable energy.
Nationally, the nuclear-power industry is caught in a debate between those who call nuclear power an essential alternative to climate changing fossil fuels, and those who question the growing costs of maintaining the country's decades-old nuclear plants.
Copyright 2016 The Associated Press. All rights reserved. This material may not be published, broadcast, rewritten or redistributed.