Can you hear them now? New buoy listens for singing whales 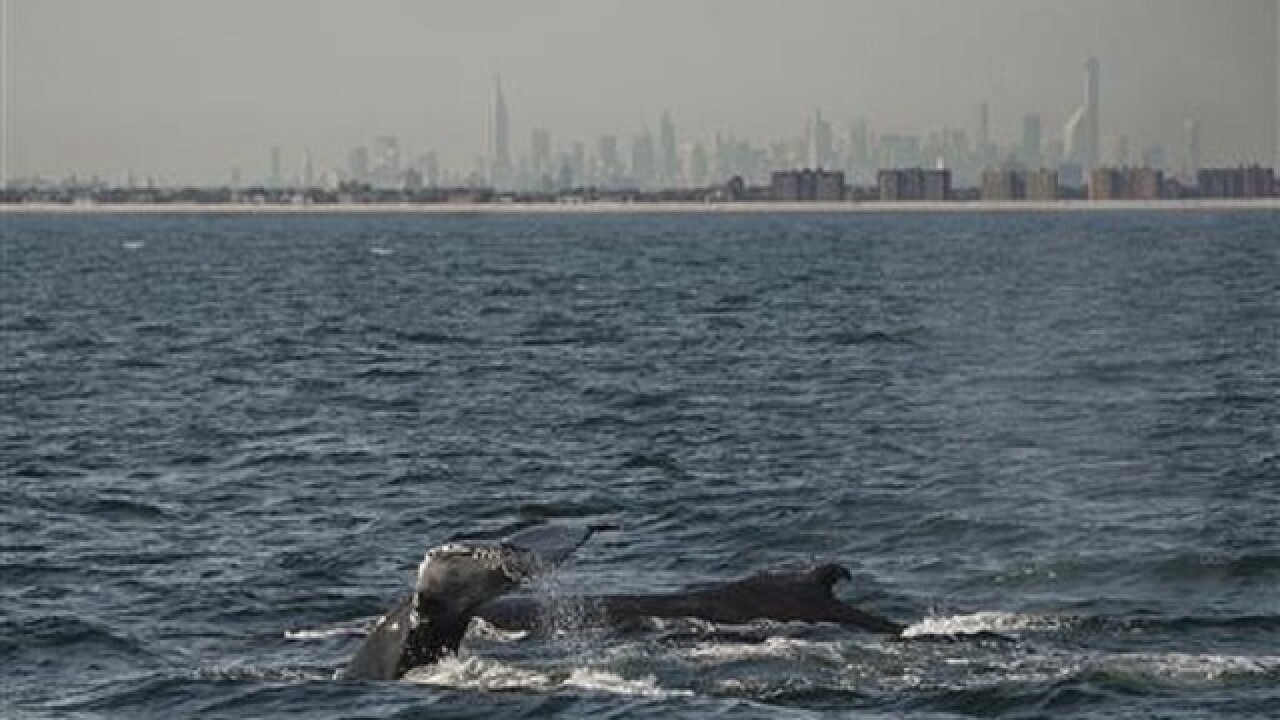 MINEOLA, N.Y. (AP) — Scientists have deployed a buoy 22 miles off the coast of New York's Fire Island to monitor several species of great whales in "near real-time." The high-tech acoustic device will eavesdrop on the songs of the whales to better understand and safeguard their movements near two busy shipping lanes entering New York Harbor.
"We know they're there, but we know very little about them," said Dr. Howard Rosenbaum, director of Wildlife Conservation Society's Ocean Giants Program. His New York-based organization, in collaboration with the New York Aquarium, has teamed with the Woods Hole Oceanographic Institution in Massachusetts on the research project.
Scientists last week deployed the buoy, which is four feet in diameter with a mast standing six feet above the sea surface south of Long Island. The buoy is connected by "stretch hoses" to a weighted frame that sits 125 feet below on the sea floor. The frame features high-tech listening devices connected to an underwater microphone.
The devices will focus on obtaining data on the sounds of several species of baleen whales because they are endangered, said Dr. Mark Baumgartner of the Woods Hole Oceanographic Institution. The data will be transmitted back to scientists in near real-time, for analysis within about two hours, Rosenbaum said.
The buoy also will collect the sounds of other whales, but that information will be archived in the listening devices at the bottom of the sea and analyzed when the buoy is retrieved after a year, Baumgartner said.
The scientists noted that all whales rely on their acoustic environment to socialize and navigate, and they are vulnerable to underwater noise, ship strikes and fishing gear entanglements.
The research collected could help prevent ship strikes, and may be helpful as the federal government and New York state consider placing a massive wind energy farm offshore in the coming years.
The buoy has been placed inside what is called the New York Bight, which features busy shipping lanes and lucrative fishing grounds. The Bight is home to seven species of great whales, including the humpback whale — known for its acrobatics and long, haunting songs — and the blue whale. The highly endangered North Atlantic right whale — one of the world's rarest whale species — migrates through New York waters, and fin, sei, minke and sperm whales also have been seen or heard, the scientists said.
Similar buoys were deployed off the coasts of Massachusetts and Maine earlier this year, and a Cornell University project has deployed near real-time buoys in shipping lanes near Boston to help protect the animals from ship strikes in that area, Baumgartner said.
Scientists around the world deploy listening devices to study whales, but the projects off New York and New England are the only known projects that relay information in near real-time, he added.
Copyright 2016 The Associated Press. All rights reserved. This material may not be published, broadcast, rewritten or redistributed.