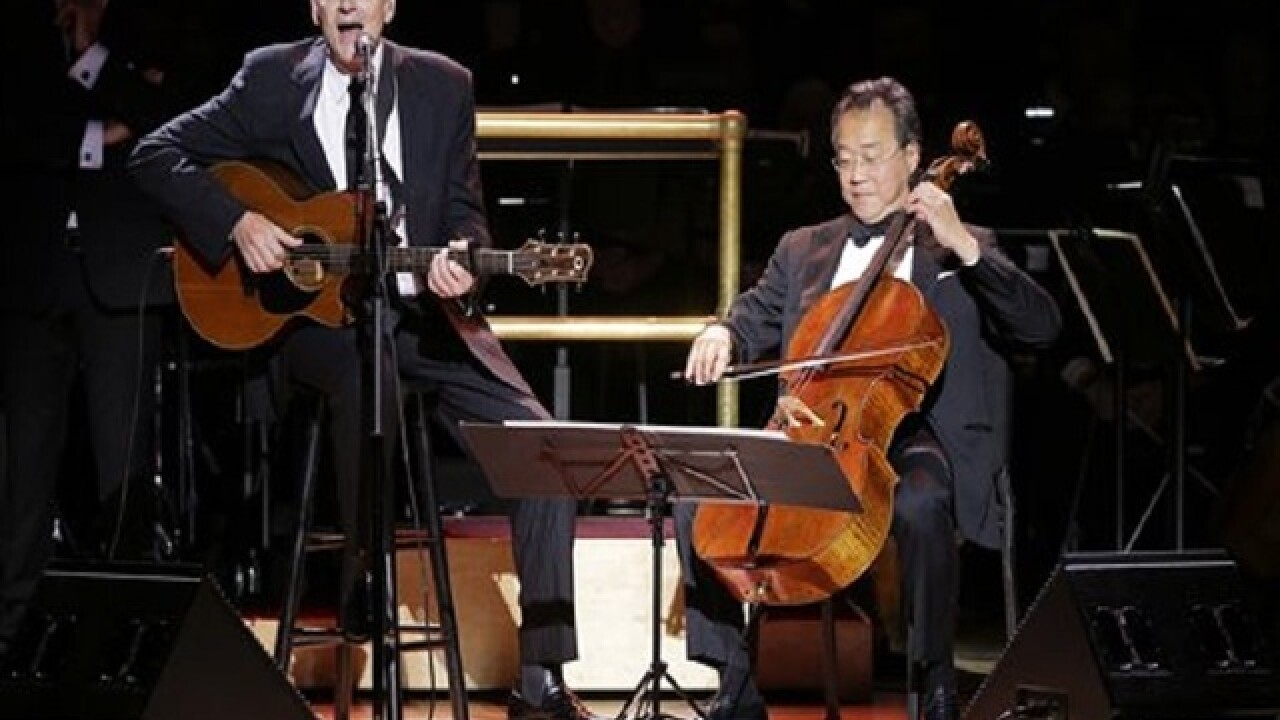 NEW YORK (AP) — James Taylor thought back four decades to his Carnegie Hall debut and said it was "the sort of cultural sign" that he had made it to a certain level of stardom.
"We celebrated," the singer and songwriter said. "That's why I don't remember it that well."
Taylor helped Carnegie Hall commemorate its 125th anniversary Thursday night with a gala concert that included performances by singer/pianist Michael Feinstein, soprano Renee Fleming, mezzo-soprano Isabel Leonard, pianists Emanuel Ax and Lang Lang, violinist Itzhak Perlman and cellist Yo-Yo Ma.
Two retired singers, soprano Martina Arroyo and mezzo-soprano Marilyn Horne, gave spoken tributes, and first lady Michelle Obama recorded a video that was played. Horne, who is 82, joked that she felt as if she'd been at Carnegie for all 125 years.
Host Richard Gere paid tribute to the violinist Isaac Stern, who made his Carnegie Hall debut in 1943, led the campaign that saved the hall from demolition after the New York Philharmonic moved to Lincoln Center in the 1962 and served as Carnegie's president until his death in 2001.
"Mr. Stern, we thank you, sir," Gere said to applause.
A two-part gala was held when Carnegie celebrated its centennial on May 5, 1991 — exactly 100 years after Tchaikovsky conducted his Festival Coronation March with the New York Symphony Orchestra during the first performance. The centennial gala opened with a world premiere, Joan Tower's "Third Fanfare for the Uncommon Woman," and James Levine and Zubin Mehta conducted the New York Philharmonic. Both programs were solely classical, with no musical tribute to the jazz greats who performed at Carnegie or the rock bands such as the Beatles and Rolling Stones.
This program, which lasted a little more than 90 minutes, was more varied, starting with classical and moving onto Feinstein and Taylor. With Pablo Heras-Casado conducting the Orchestra of St. Luke's and the Oratorio Society of New York, Gere spoke between performances and listed many of Carnegie's most famous performers, such as pianist Vladimir Horowitz and violinist Jascha Heifetz. He recounted anecdotes accompanied by video projections of more than a century of photographs and programs.
Among the highlights was Fleming and Leonard in the Barcarolle from Offenbach's "Les Contes d'Hoffmann (The Tales of Hoffmann)," a revered singer and one of classical music's rising stars. With the lights turning the hall a shimmering blue to evoke the mood of the sky above a Venetian Canal, Fleming's vibrant, milky soprano and Leonard's dusky mezzo combined in "Belle nuit, o nuit d'amour (Beautiful night, oh night of love)," a duet that made one think of music's past and future.
Lang Lang, ever the showman, sparked in Ernesto Lecuona's "... y la negra bailaba! (and black danced)" and later served as a celebrity page-turner for Ax during the encore as the two took turns at the keyboard.
Fleming was richly moving in Strauss' "Morgen," and Leonard gave a vocally hearty but dramatically restrained performance of the Habenera from Bizet's "Carmen."
After Horne and Arroyo spoke, the amplification was turned on for Fleming in Leonard Cohen's "Hallelijah." Feinstein injected the most energy when he sang and played George Gershwin's "Strike Up the Band" and accompanied Leonard for an Irving Berlin and Jerome Kern medley.
Taylor, his voice having lost none of its sweetness at age 68, sang George Harrison's "Here Comes the Sun" accompanied by Yo-Yo Ma and paid tribute to Prince when he inserted "purple" before "rain" in "Shower the People." All the performers came on stage for the encore of Roger Edens' "The Joint is Really Jumpin' in Carnegie Hall," made famous by Judy Garland.
On to the next quarter century.
Associated Press 2016