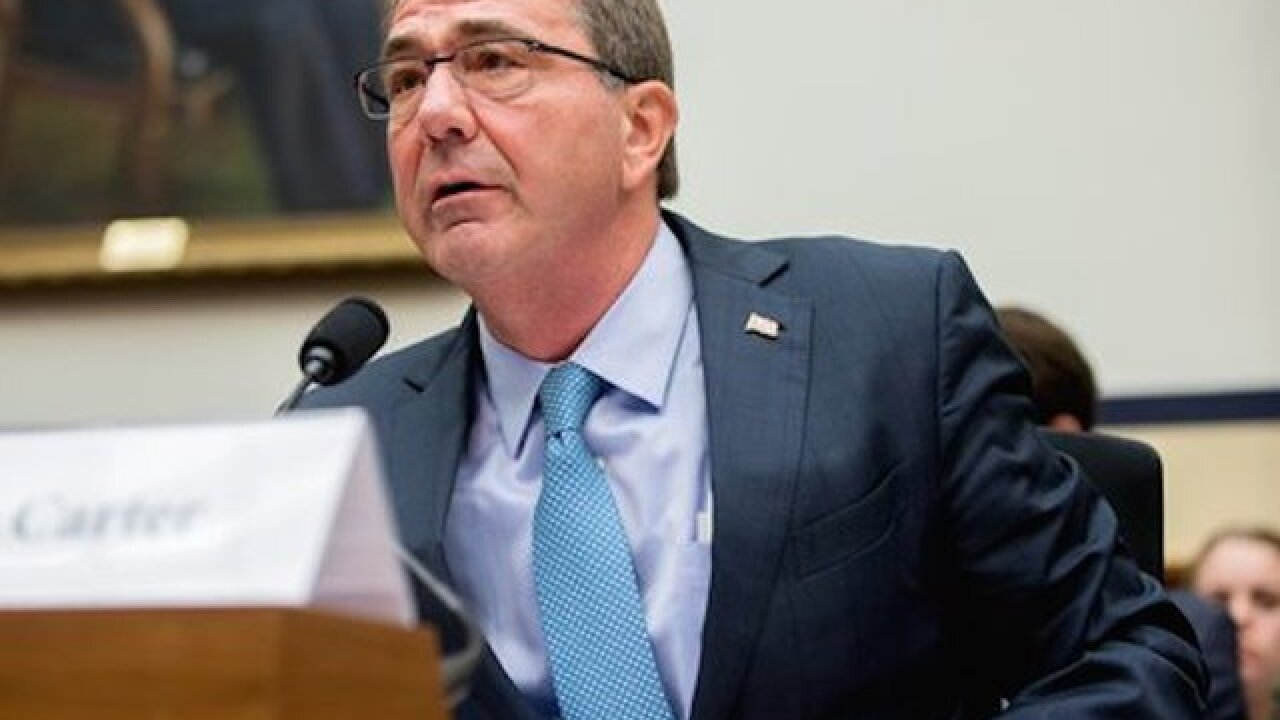 INCIRLIK AIR BASE, Turkey (AP) — Defense Secretary Ash Carter said the U.S. wants Turkey to better control its border with Syria, which could help block the flow of foreign fighters to the Islamic State, and to more forcefully join the U.S.-led coalition "in the air and on the ground."

Carter was in Turkey Tuesday, saying he is looking for new ways the U.S.-led coalition can strengthen its fight against Islamic State militants in Iraq and Syria.

Carter said he will be asking his military commanders and other officials to come up with new tactics that can be used to attack IS, and identify new contributions that coalition partners can make to accelerate the destruction of the insurgent group.

Speaking to reporters traveling with him, Carter said the U.S. wants Turkey to better control its border with Syria, which could help block the flow of foreign fighters.

And, he said, "We want Turkish forces to join in the air and on the ground as appropriate."

Carter left the U.S. immediately after meeting with President Barack Obama and the National Security Council in the Pentagon on Monday.

"We need to identify and then carry out every conceivable way of accelerating the defeat of ISIL," said Carter, using another acronym for Islamic State. "The president is asking all of us to do more."

Carter and other U.S. and coalition leaders have recently been claiming progress in the fight, saying the Islamic State group is on the defensive and losing some ground.

But progress to retake key Iraq cities, such as Ramadi and Mosul, has been slow. In recent days, Iraqi forces backed by coalition airstrikes have been able to largely encircle Ramadi, but officials say they can't estimate how long it may take to oust IS from the city.

Carter has written letters to various members of the coalition asking for additional support for the Islamic State fight, and in many cases spelling out what each country may be able to do. For some that may be airstrikes, while others may be able to contribute transportation aircraft, intelligence, surveillance or troops on the ground to provide training.

"Over this trip and in the subsequent weeks and months, I'll be asking them each to make the strongest, most robust contributions that they can," said Carter, who is making a weeklong trip to the region.

He said the U.S. would particularly like to see the Gulf countries do more.

"I think that some of Gulf countries could make very important contributions to encouraging and assisting Sunni communities subjected to ISIL rule to resist ISIL rule -- something they can do that's harder for other countries to do," he said.

Separately, Saudi Arabia announced Tuesday that 34 nations have agreed to form a new "Islamic military alliance" to fight terrorism with a joint operations center based in the kingdom's capital, Riyadh.

Officials have been prodding Turkey to do more for months, leading to the greatly expanded use of Incirlik Air Base for airstrikes and surveillance.

At the beginning of September, there were 15 aircraft based at Incirlik, and there are now 59, with more expected in the coming weeks. Of those, 45 are U.S. aircraft, and the rest are from Turkey, Qatar and Germany. The aircraft include fighter jets, drones, and refueling aircraft.

This is Carter's first visit to Incirlik Air Base as secretary, and it comes amid rising tensions between Turkey and Iraq. Iraqi leaders objected when heavily-armed Turkish troops were deployed to a camp in northern Iraq.

Iraq demanded the troops leave immediately, and Turkey on Monday withdrew some of the soldiers from the camp.

Turkey has had troops near the Islamic State group-held city of Mosul in northern Iraq since last year to help train local Kurdish and Sunni forces, but the arrival of additional forces earlier this month caused an uproar in Baghdad. Turkey subsequently halted new deployments, but had refused to withdraw its soldiers.

Turkey has argued the additional troops were needed to protect its trainers from an increased threat from the Islamic State group.

Russia and Turkey also have been at odds over Russian flights at Turkey's border. Last month Turkey shot down a Russian warplane, saying it had entered Turkish airspace.

Moscow denied that, and has retaliated by deploying long-range air defense missile systems to its air base in Syria.