Cause of NYC crane collapse under investigation 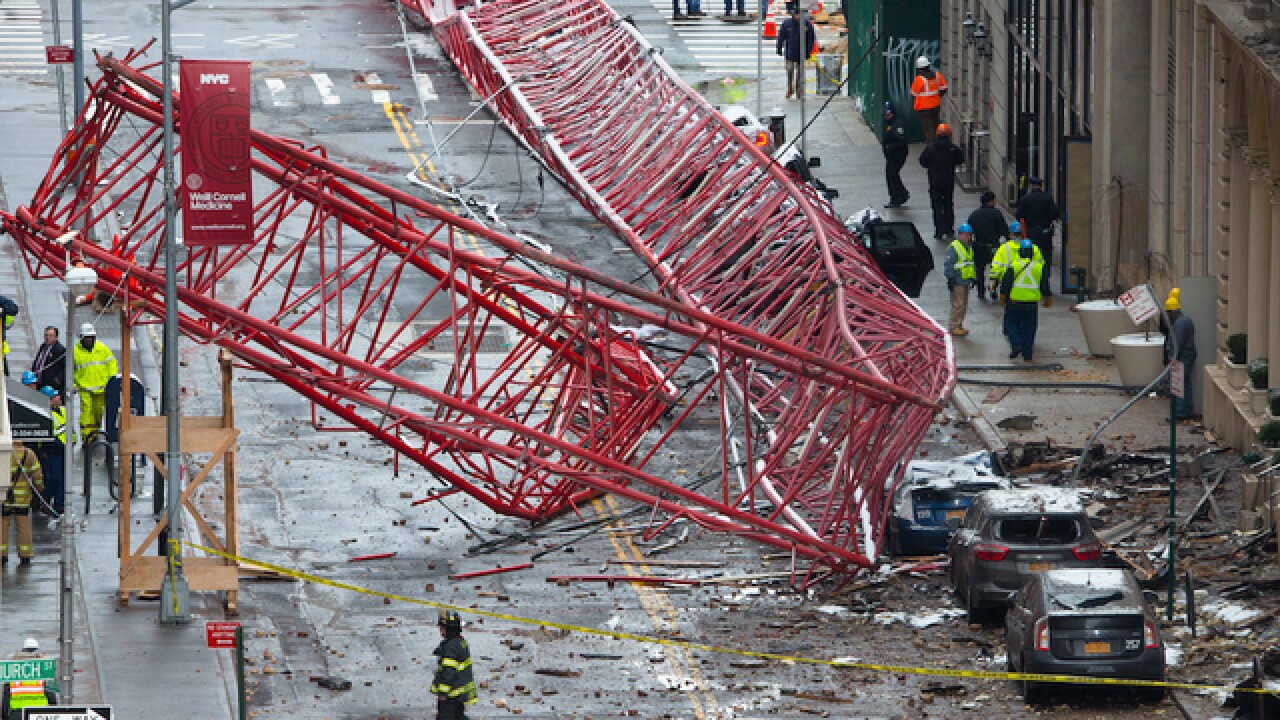 Brian Marrone
<p>A collapsed crane fills the street on Friday, Feb. 5, 2016, in New York. The huge construction crane was being lowered to safety in a snow squall when plummeted onto the street in the Tribeca neighborhood of lower Manhattan. (Brian Marrone via AP)</p>

Officials are working to determine why a huge construction crane that was being lowered during strong winds came crashing down onto a street, killing a pedestrian and crushing a row of parked cars. Three other people were hurt by debris, two of them seriously.

But city officials said it could have been much worse.

"The fact is this is a very, very sad incident," Mayor Bill de Blasio said. "We've lost a life, but if you go out there on the street as I did and see what happened here, thank God it was not worse."

The mayor said a construction crew was directing people away from the area as the crane was being lowered Friday.

"So that crew - those construction workers, who, in the normal course of their work, as they were lowering the crane, were in fact keeping people away from the site and keeping traffic from proceeding down West Broadway," de Blasio said.

The mobile crane's boom landed across an intersection, smashed several car roofs and stretched much of a block after the accident at a historic building in lower Manhattan about 10 blocks north of the World Trade Center.

Robert Harold heard a crashing sound as the rig fell right outside his office window at the Legal Aid Society.

"You could feel the vibration in the building," said Harold, who recounted seeing onlookers trying to rescue someone trapped in a parked car and seeing a person lying motionless on the street. After the collapse, the crane's big cab lay upside-down in the snow with its tank-like tracks pointed at the sky.

Wall Street worker David Wichs was killed in the collapse. He was a mathematical whiz who worked at a computerized trading firm, his family said. Born in Prague, he had immigrated to the United States as a teenager and graduated from Harvard University, said his sister-in-law, Lisa Guttman.

"He really created a life for himself. He literally took every opportunity he could find," she said through tears.

A bystander's video taken through a window high above the ground showed the arm descending and then taking the entire crane to the ground.

Officials have not yet determined why the crane fell.

An employee who answered the phone at the offices of crane owner Bay Crane would say only that an investigation was underway and wouldn't give his name.

City building inspectors had been at the site Thursday because the boom was being extended so it could reach farther onto the roof, de Blasio said.

Buildings Commissioner Rick Chandler said inspectors found no problems then with the crane but would investigate further.

A spokesman for the building's owners said in a statement that they were "saddened by the injuries and loss of a life."

Crane safety came under scrutiny in the city after two tower cranes collapsed in Manhattan within two months of each other in 2008, killing a total of nine people. The accidents fueled new safety measures, but a number of crane accidents have occurred in the city since then.

Officials said they would discuss the city's response and recovery actions at a news conference Saturday at the site of the collapse.