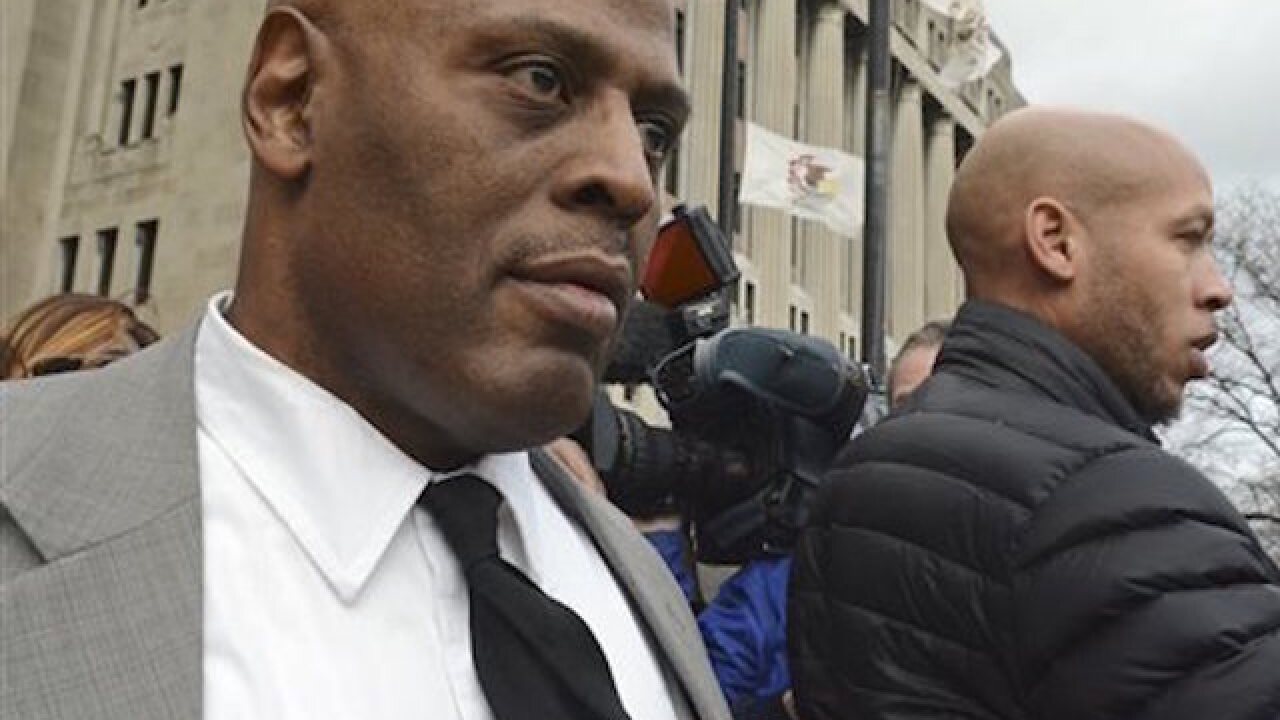 Brian Jackson
<p>Chicago Police Cmdr. Glenn Evans, left,who was accused of shoving his gun down a suspect's throat and pressing a stun gun to the man's groin in 2013, leaves the Criminal Courts Building in Chicago on Monday, Dec. 14, 2015, after being acquitted on battery and misconduct charges. (Brian Jackson/Chicago Sun-Times via AP) CHICAGO TRIBUNE OUT, MANDATORY CREDIT, MAGS OUT, NO SALES</p>

CHICAGO (AP) — A judge on Monday acquitted a Chicago police commander accused of shoving his gun down a suspect's throat, outlining what she said were flaws in the state's case and stressing that it shouldn't be conflated with other recent cases of alleged police misconduct that have come to the fore in Chicago and elsewhere.

Cook County Judge Diane Cannon found Cmdr. Glenn Evans not guilty of aggravated battery with a deadly weapon and official misconduct stemming from the 2013 arrest of Rickey Williams, whom Evans believed he had seen holding a gun.

Cannon said she didn't find Williams' story believable, accusing him of changing it repeatedly and of offering to change it if it would help investigators. She also dismissed evidence thought to be among the most damning — Williams' DNA on Evans' gun — suggesting it was collected so sloppily that that it was of "fleeting relevance. But she opened and closed her remarks by cautioning that the case shouldn't be grouped with other recent cases of alleged police misconduct.

"My ruling does not pertain to (police) misconduct," the judge said. "This is just one case."

Evans' case received widespread attention because of his aggressive tactics — condemned by some, praised by others — as the city has struggled to lower its violent crime rate. Former Chicago Police Supt. Garry McCarthy and residents of crime weary neighborhoods said Evans helped clean up a number of areas under his command, while others say he symbolized the department's failure to control its officers. Both Evans and Williams are black.

The bench trial unfolded as protesters rallied against alleged brutality by Chicago police after last month's release of a squad-car video that showed a white officer shooting a black teenager 16 times in October 2014. That officer was charged with first-degree murder just hours before police finally released the video after being ordered to do so by a judge.

Evans showed little reaction upon hearing the verdict. He could have faced up to five years in prison.

Williams' lawyers issued a statement saying they will proceed with a lawsuit and are confident they'll meet the burden of proof needed to show that Evans violated Williams' rights.

Prosecutors alleged that Evans tackled Williams and stuck his gun in Williams' mouth while demanding to know where he had put a gun he believed he had seen Williams holding. Williams testified that he hadn't been carrying a gun and that Evans must have mistaken it for a cellphone he had been holding. He said Evans shoved his gun so far down his throat that he gagged and later spat blood.

Investigators never recovered a gun, and the charges against Williams were later dropped.

In dismissing the usefulness of the DNA found on the gun, Cannon pointed out that investigators swabbed the entire weapon instead of just the barrel. She also said Williams' saliva wasn't tested for gun residue and the inside of the barrel wasn't tested for his DNA, suggesting the DNA could have gotten on the gun during a tussle with officers.

Evans' attorneys questioned Williams' credibility and the reliability of the DNA evidence. After the verdict, though, they were most critical of the Independent Police Review Authority, the city's main police oversight agency that investigated the incident and has been harshly criticized for not recommending that enough officers be punished.

"They were inept, they were at times corrupt (and) they didn't want to see the things that made Glenn Evans ... innocent,' said Laura Morask.

Evans, who is one of the highest ranking members of the department to ever face criminal charges, was a polarizing figure in the community. Repeatedly praised by McCarthy for his aggressive tactics, Evans was also the subject of at least 45 excessive-force complaints over a 20-year period, according to a study done for the People's Law Office in Chicago. Critics pointed to that total as evidence of the department's willingness to condone or at least ignore the brutal behavior of its officers.

The release last month of the squad car video of the police shooting of 17-year-old Laquan McDonald has led to a series of protests about the police department's treatment of suspects, particularly blacks, and led to McCarthy's ouster. Protesters are calling for more resignations, including those of Emanuel and Cook County State's Attorney Anita Alvarez.

After the verdict Alvarez defended her decision to charge Evans.

"This case underscores the reality that it is extremely difficult to convince judges or juries in Cook County and around the country to convict police officers of misconduct in the line of duty, despite the fact that this victim made an immediate outcry and we had DNA evidence to support our case," she said in a statement.

The verdict marks the second time this year that the office has suffered a high-profile defeat after bringing charges against a Chicago police officer. Dante Servin was charged with involuntary manslaughter and other charges in the shooting death of an unarmed black woman in 2012, but in April a judge suggested that prosecutors filed the wrong charges against the officer and acquitted him.