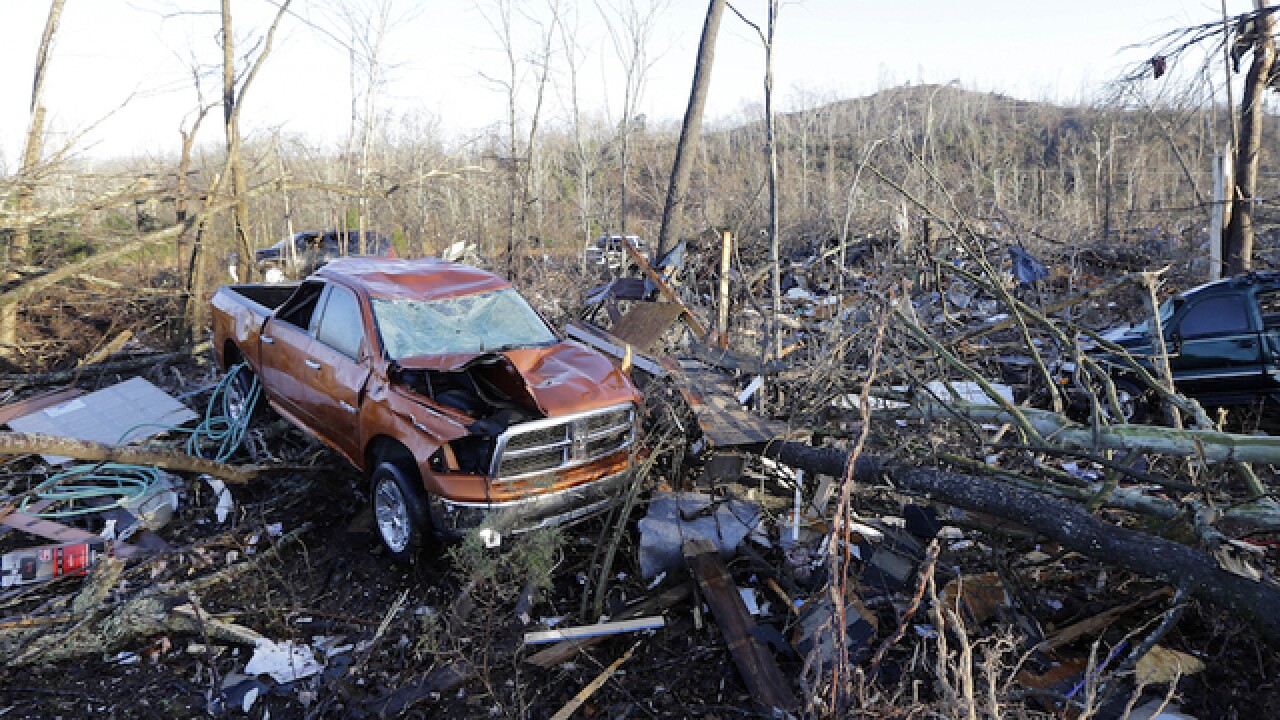 Mark Humphrey
<p>Vehicles and debris are scattered in an area near Linden, Tenn., Thursday, Dec. 24, 2015. Several people were killed in Mississippi, Tennessee and Arkansas as spring-like storms mixed with unseasonably warm weather spawned rare Christmastime tornadoes in the South. </p>

Instead of doing some last-minute shopping or wrapping gifts, families across the South spent Christmas Eve taking stock of their losses after an unusual outbreak of December tornadoes and other violent weather killed at least 14 people and damaged or destroyed dozens of homes.

"Santa brought us a good one, didn't he?" Bobby Watkins said as he and his wife took a walk amid the destruction in rural Benton County, Mississippi, where four people — including a married couple and two neighbors on the same street — were confirmed dead and their homes destroyed. "I may have lost some stuff, but I got my life."

Authorities confirmed seven deaths in Mississippi, including that of a 7-year-old boy who was in a car that was swept up and tossed by a storm. Six more died in Tennessee. One person was killed in Arkansas.

Search teams combed damaged homes and businesses for people still missing, including at least one man in hard-hit Benton County. The hunt was made complicated because so many had left for the holidays.

"Until they know for sure where those folks are, they're going to keep looking, because we've had in some cases houses leveled, and they're just not there anymore," Flynn said.

In Linden, Tennessee, Tony Goodwin ducked into a storm shelter with seven others as the storm passed. He emerged to find his house had been knocked off its foundation and down the hill.

He managed to climb inside and fetch some Christmas gifts that had been under his tree. Goodwin's neighbors weren't so fortunate. Two people in one home were killed.

"It makes you thankful to be alive with your family," he said. "It's what Christmas is all about."

Chris Shupiery grabbed his Santa hat along with a chain saw as he set out to help clean up on Thursday. He cut up fallen trees not far from Goodwin's home.

"This was just the right thing to do, come help a family in need," Shupiery said. "Suit up, try to cheer people up and try to make them feel a little better with Christmas coming around."

In Benton County, Mississippi, relatives helped Daisy and Charles Johnson clean up after the storm flattened their house. They carried some of the couple's belongings past a Santa Claus figure on a table.

Daisy Johnson, 68, said she and her husband rushed along with other relatives to their storm shelter across the street from the house after they heard a twister was headed their way.

"We looked straight west of us and there it was. It was yellow and it was roaring, lightning just continually, and it was making a terrible noise," she said. "I never want to hear that again for as long as I live."

Mona Ables, 43, was driving home when the storm hit. She abandoned her car, ran to a house and banged on a window, seeking shelter.

The startled man inside couldn't open the door, which appeared to be blocked, Ables said. She huddled next to the house as another stranger pulled up, also looking for shelter.

"He and I just huddled together and saw trees fly past us, and a shipping container flip over," Ables said. "And as the debris started hitting us, he just covered me, and within a minute it was all over and there was destruction all around us and we were fine."

Peak tornado season in the South is in the spring, but such storms can happen at any time. Exactly a year ago, twisters hit Mississippi, killing five people and injuring dozens.

Glenda Hunt, 69, was cooking chicken and making dressing Wednesday night at her Benton County home, where Christmas Eve lunch is a family tradition, when her daughter called to warn her of the approaching storm.

Hunt and her husband ducked into their storm shelter and wrestled the door shut against the wind's powerful suction. She started praying when she heard sheet metal hitting trees.

On Thursday, heavy farm equipment and corn were strewn across the couple's property. Their house sustained heavy structural damage but was still standing.

"We're OK and that's all that matters," Hunt said. "But the Lord did save my furniture."