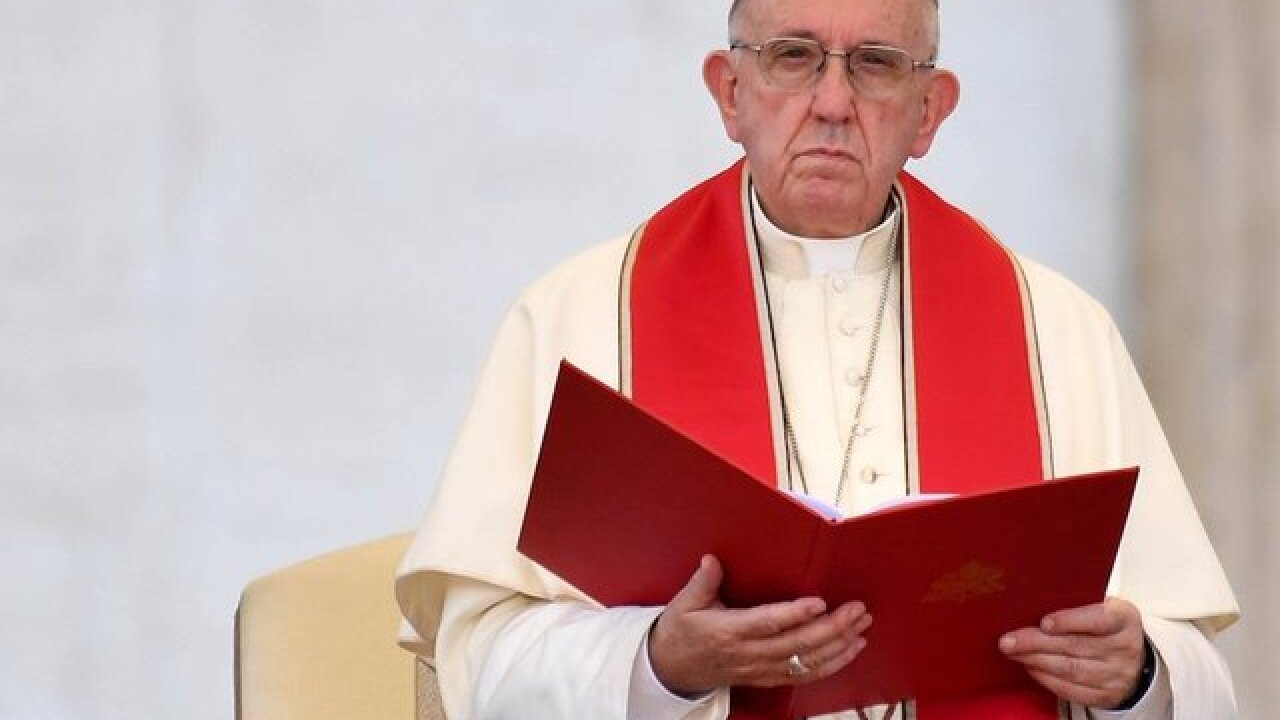 Image copyright 2018 Getty Images. All rights reserved. This material may not be published, broadcast, rewritten, or redistributed.
Andreas Solaro/Getty Images
<p>Survivors of clergy sex abuse stood in front of the Vatican embassy in Washington on Thursday and urged two higher powers -- the Pope and the US Department of Justice -- to take concrete steps to prevent more abuses and hold abusers accountable.</p>

Survivors of clergy sex abuse stood in front of the Vatican embassy in Washington on Thursday and urged two higher powers -- the Pope and the U.S. Department of Justice -- to take concrete steps to prevent more abuses and hold abusers accountable.

The Survivors Network of Those Abused by Priests (SNAP) and Center for Constitutional Rights have also sent a letter to Deputy Attorney General Rod Rosenstein demanding an "investigation and prosecution of high-level officials in the Catholic Church" for sexual crimes and cover-ups.

"It is long past time for the US Department of Justice to initiate a full-scale, nationwide investigation into the systemic rape and sexual violence, and cover-ups in the Catholic Church, and, where appropriate, bring criminal and/or civil proceedings against the hierarchy that enabled the violations," the groups said in the letter.

Pam Spees, senior staff attorney at the Center for Constitutional Rights, said a Department of Justice official has confirmed receipt of the request. Spees was part of the small protest in front of the Vatican embassy on Thursday.

Asked for comment, a spokesperson for the Department of Justice said, "We don't confirm or deny the existence of investigations."

"They have plenty of evidence," said Peter Isely, spokesman for the group Ending Clergy Abuse. "Let's launch this investigation. Let's do it now."

SNAP's letter demanding a federal investigation is dated August 15, one day after a damning report by a grand jury in Pennsylvania said there is credible evidence that 301 "predator priests" abused more than 1,000 children in six dioceses since 1947.

Because the statute of limitations had run out on most of the crimes, only two priests have been charged as a result of the two-year-long investigation.

But the Pennsylvania report has prompted officials in several other states, including Illinois and Missouri, to open inquiries into allegations of sexual misconduct by Catholic clergy.

SNAP said they have been asking for a federal investigation into the Catholic Church since 2003, during the church's last widespread scandal of clergy sex abuse.

As the embassy's white and yellow papal flag waved behind them, the abuse survivors also called on Pope Francis to release documents that could shed light on what top Vatican officials knew about Washington's former cardinal, Archbishop Theodore McCarrick, who has been accused of abusing a minor and seminarians.

McCarrick has denied accusations that he abused the minor and has not commented on the allegations about seminarians.

In an explosive letter published Sunday, former Vatican ambassador Archbishop Carlo Maria Viganò said that top church officials, including Pope Francis, knew that McCarrick had been accused of abusing seminarians but covered it up. Viganò also accused Francis of lifting restrictions placed on him by the previous pope, Benedict XVI.

Vigano wrote that documents backing up his accusations were in Vatican files in the Washington embassy, where he worked from 2011-2016, when he was removed by Pope Francis.

The Pope has said he will not comment on the accusations.

"I will not say a single word about this," he said on Sunday in a press conference aboard the papal plane. "I believe the statement speaks for itself. And you have the sufficient journalistic ability to make your conclusions. It's an act of trust."

The Vatican has not responded to a CNN request to review McCarrick's church files. CNN also attempted to speak to Vatican officials at the embassy in Washington on Thursday, but no one answered the door.