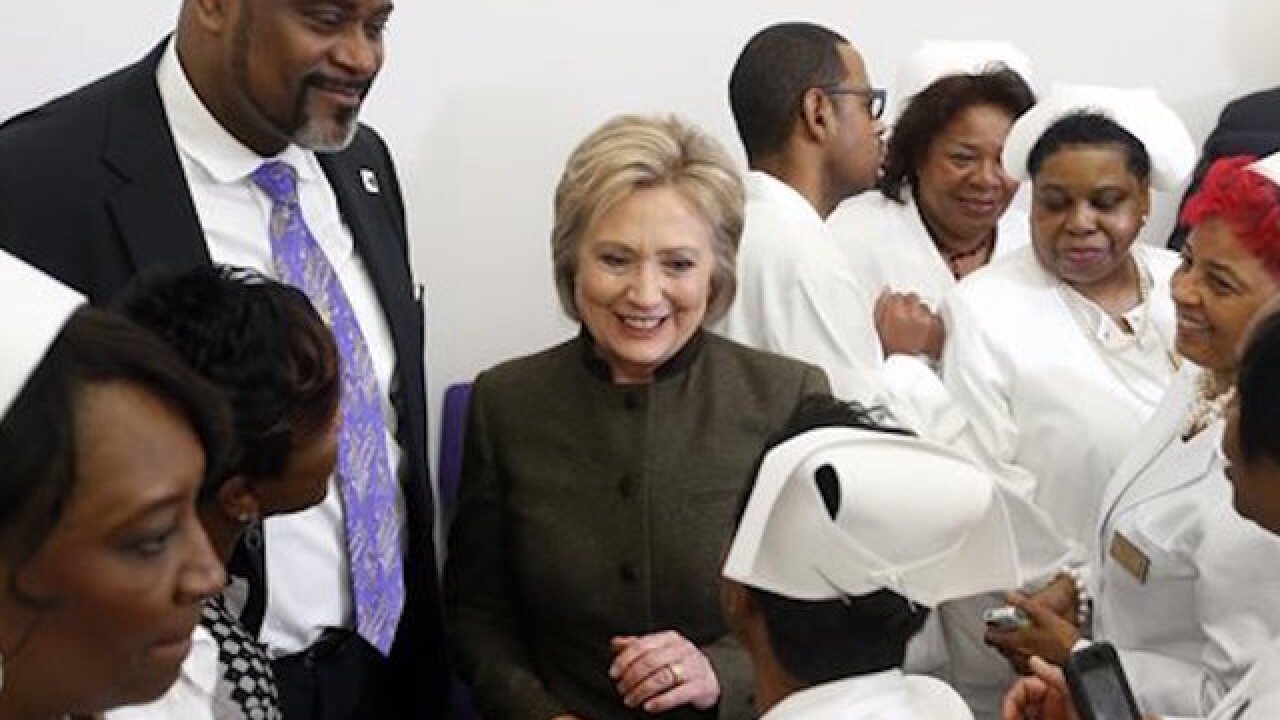 FLINT, Mich. (AP) — Taking a detour from New Hampshire's campaign trail, Hillary Clinton said Sunday that a water crisis in a Michigan city was "immoral" and demanded that Congress approve $200 million in emergency aid to address the community's battle with lead-contaminated water.

The Democratic presidential hopeful made a quick visit to Flint, Michigan, an unusual stop for a candidate trailing in polls against rival Bernie Sanders in the first primary state. Clinton hopes to use a narrower-than-expected loss in Tuesday's primary as a springboard into contests later this month in Nevada and South Carolina.

Clinton said she was making a "personal commitment" to help Flint in a message delivered not only to the congregants at a local Baptist church but also a more heavily-minority electorate in Southern contests that could help her build a foundation for a delegate-by-delegate drive toward the nomination.

"This is not merely unacceptable or wrong, though it is both. What happened in Flint is immoral," Clinton said at House of Prayer Missionary Church. She added: "I will fight for you in Flint no matter how long it takes."

Aides said Clinton was invited by Flint Mayor Karen Weaver to address the crisis of lead-poisoned water, a case that she has cited in Iowa and New Hampshire as an example of racial and economic injustice. It's an issue that resonates among Democrats, particularly African-American voters who play a major role in later contests in South Carolina and a swath of "Super Tuesday" states on March 1.

From the pulpit, Clinton urged Congress to provide $200 million to fix Flint's water system, saying it was "no time for politics as usual."

Clinton narrowly beat Sanders in Iowa's leadoff caucuses last Monday but has trailed the Vermont senator in New Hampshire by large margins. Her aides worry that a big Sanders victory in the state could help him make headway among women and minority voters, important parts of the coalition that twice elected Barack Obama as president.

Sanders' strength with younger voters only heightens the threat he poses to what was once Clinton's decisive national lead.

Stopping at a local Dunkin' Donuts before departing New Hampshire on Sunday morning, Clinton pledged to fight for every vote in New Hampshire, but at least some of her operation is moving on. This weekend, former President Bill Clinton wooed voters in Las Vegas, campaign surrogates knocked doors in San Antonio, and Clinton's aides announced an upcoming meeting with civil rights leaders in New York City.

Clinton aides are trying to make the case that the heavily white and liberal electorates of New Hampshire and Iowa make them outliers in the nomination fight. They say Clinton will find more success in the South Carolina primary on Feb 20 and the Nevada caucuses a week later, where polls show her with a wide lead.

In recent days, she has used the state as a testing ground for new campaign messages targeted at specific groups, with pledges to break "the highest and hardest glass ceiling" and promising young voters that she would "be for them" even if they support Sanders.

Sanders has worked to boost his profile among black voters who make up more than half of the South Carolina electorate.

On Friday, his campaign scheduled a press conference to promote the endorsement of former NAACP President Ben Jealous. Though snow forced the event to be canceled, Jealous told reporters on a conference call that Sanders "has the courage to confront the institutionalized bias that stains our nation."

Jealous was in South Carolina for campaign events on Saturday with Erica Garner, whose father died in 2014 after a white New York police officer put the black man in a choke hold.

Sanders' backers believe that as African-Americans learn more about the Vermont senator, they will warm to his liberal message. Clinton is one of the best known political figures in the world and has strong backing among Latinos and black voters.

"Before a few weeks ago, I never gave Bernie Sanders the time of day," said South Carolina state Rep. Justin Bamberg, who recently switched his backing from Clinton. "But if you look at Sanders he has been solid as concrete with regards to his passion for racial, social and economic justice."