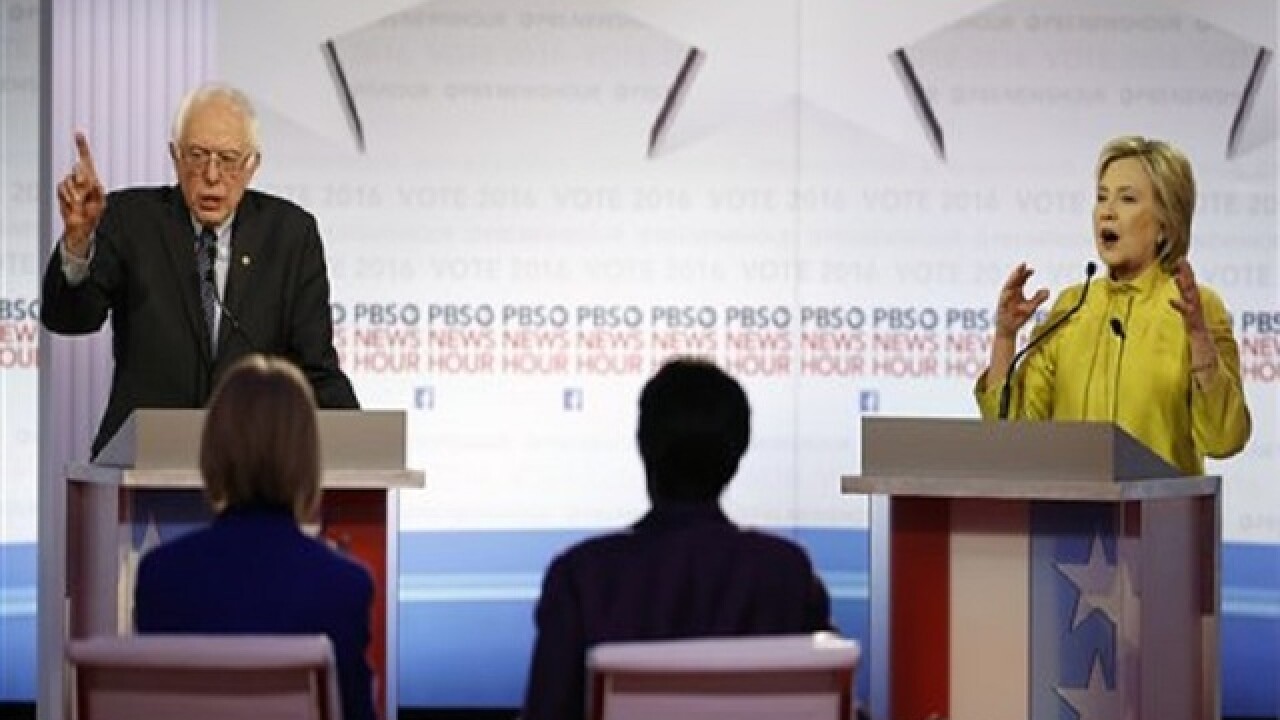 MILWAUKEE (AP) — Hillary Clinton and Bernie Sanders battled for the crucial backing of black and Hispanic voters in Thursday night's Democratic debate and clashed heatedly over their support for Barack Obama as the presidential race shifted toward states with more minority voters.
Clinton, who has cast herself as the rightful heir to Obama's legacy, accused Sanders of diminishing the president's record and short-changing his leadership.
"The kind of criticism I hear from Senator Sanders, I expect from Republicans. I do not expect it from someone seeking the Democratic nomination," Clinton said in a sharp exchange at the close of the two-hour debate in Milwaukee. Her biting comments followed an interview in which Sanders suggested Obama hadn't succeeded in closing the gap between Congress and the American people — something Obama himself has acknowledged.
Sanders responded: "Madam Secretary, that is a low blow." And he noted that Clinton was the only one on the stage who ran against Obama in the 2008 presidential race.
Long viewed as the overwhelming front-runner in the Democratic race, Clinton has been caught off guard by Sanders' strength, particularly his visceral connection with Americans frustrated by the current political and economic systems. Clinton's own campaign message has looked muddled compared to his ringing call for a "political revolution," and her connections to Wall Street have given Sanders an easy way to link her to the systems his supporters want to overhaul.
Seeking to stem Sanders' momentum, her campaign has argued that his appeal is mostly limited to the white, liberal voters who make up the Democratic electorate in Iowa and New Hampshire. Clinton's team says that as the race turns now to Nevada, South Carolina and other more diverse states, her support from black and Hispanic voters will help propel her to the nomination.
Attempting Thursday night to boost his own support from minorities, Sanders peppered his typically economic-focused rhetoric with calls to reform a "broken criminal justice system" that incarcerates a disproportionate number of minorities.
"At the end of my first term, we will not have more people in jail than any other country," he said.
In one of many moments of agreement between the candidates, Clinton concurred on a need to fix the criminal justice system, but cast her proposals for fighting racial inequality as broader than his.
"We also have to talk about jobs, education, housing, and other ways of helping communities," said Clinton, who was endorsed earlier in the day by the political action committee of the Congressional Black Caucus.
The candidates both vowed to pursue comprehensive immigration reform, using the emotional issue to draw a contrast with Republicans who oppose allowing many of the millions of people in the United States illegally to stay.
"We have got to stand up to the Trumps of the world who are trying to divide us up," said Sanders, referring to Republican front-runner Donald Trump, who has called for deporting everyone in the country illegally and constructing a wall along the U.S.-Mexico border.
Both Clinton and Sanders also disagreed with raids authorized by President Obama to arrest and deport some people from Central America who recently came to the country illegally.
"We should be deporting criminals, not hardworking immigrant families who do the very best they can," Clinton said.
Both candidates were restrained through much of their head-to-head contest — a contrast to their campaigns' increasingly heated rhetoric. Clinton is mindful of a need to not turn off Sanders' voters, particularly the young people that are supporting him in overwhelming numbers.
Still, the former secretary of state sought to discredit some of the proposals that have drawn young people to Sanders, including his call for free tuition at public colleges and universities and a plan for a government-run, single-payer health care system. Clinton said those proposals come with unrealistic price tags. And she accused Sanders of trying to shade the truth about what she said would be a 40 percent increase in the size of the federal government in order to implement his policies.
Sanders didn't shy away from the notion that he wants to expand the size of government.
"In my view, the government of a democratic society has a moral responsibility to play a vital role in making sure all our people have a decent standard of living," Sanders said.
Sanders has focused his campaign almost exclusively on a call to break up big Wall Street banks and overhaul the current campaign finance system that he says gives wealthy Americans undue influence. His campaign contends that his message will be well-received by minority voters, arguing that blacks and Hispanics have been hurt even more by what he calls a "rigged" economy.
Clinton was animated when discussing foreign policy, an area where her campaign believes Sanders is weak. She peppered her comments on the Islamic State and Russia with reminders of her four years serving as Obama's secretary of state. Sanders challenged her judgment by raising her support for the 2003 invasion of Iraq, a war he voted against.
In the debate's early moments, Clinton found herself having to explain comments by surrogates, including former Secretary of State Madeline Albright, that suggested women had a responsibility to help elect the first female president.
"I'm not asking people to support me because I'm a woman," Clinton said. "I'm asking people to support me because I think I'm the most qualified, experienced and ready person to be the president and the commander in chief."
It was Sanders — a democratic socialist who would be the first Jewish president if elected — who tried to drape his candidacy in a bit of history.
"I think a Sanders victory would be of some historical accomplishment as well," he said.
Associated Press 2016