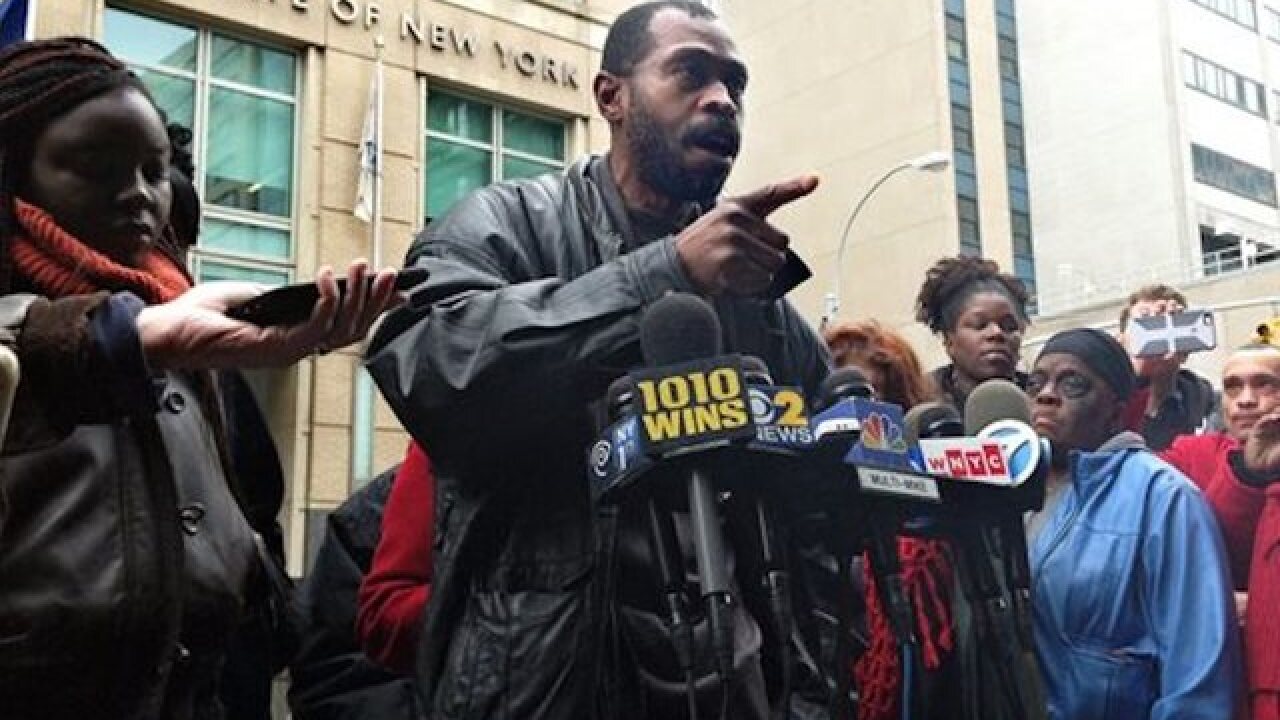 Copyright Associated Press
Jennifer Peltz
<p>Kenneth Palmer, stepfather of Akai Gurley, speaks outside state Supreme Court in the Brooklyn borough of New York Monday, Feb 8, 2016, after hearing NYPD Officer Peter Liang testify about Gurley's 2014 death in a housing project stairwell. Lawyers for Liang say the evidence doesn't meet legal requirements for the charges, which accuse him of disregarding a substantial and unjustifiable risk of serious injury or death, and have asked the judge to dismiss the case. (AP Photo/Jennifer Peltz)</p>

NEW YORK (AP) — Jurors began deliberating Tuesday on whether a rookie police officer who shot an innocent man in a dark public housing stairwell accidentally discharged his weapon, as he says, or whether he acted out of recklessness and did little to help the dying victim, as the prosecution contends.

New York Police Department Officer Peter Liang faces up to 15 years in prison if he's convicted on manslaughter and other charges in the death of 28-year-old Akai Gurley, who was taking the stairs down with his girlfriend rather than wait for an elevator at the Brooklyn complex.

Liang, 28, testified this week that he didn't know anyone was in the pitch-black stairway on Nov. 20, 2014, when he unintentionally fired his drawn gun while on patrol after being startled by a noise. The shot ricocheted off a wall and hit Gurley, who was unarmed.

"This finger along the side of the gun ... will not slip off and find its way to the trigger," he said. "This was no accident."

Liang's attorney, Robert Brown, cautioned jurors not to let emotions play any role in their deliberations.

"What happened here is a tragedy," he said. "It's a terrible tragedy. But it's not a crime."

Before delivering his instructions to the jury, Brooklyn Supreme Court Justice Danny Chun dismissed one of two misdemeanor counts Liang faced, saying prosecutors failed to meet their burden of proof in an argument that not rendering medical aid to Gurley in the stairwell was criminal.

Liang testified Monday that after firing the shot, he beamed his flashlight into the stairwell and initially saw no one. Liang acknowledged that he didn't immediately report the shot. Fearing for his job, he bickered with his partner about which one would phone their sergeant.

Then he went looking for the bullet and heard someone crying. He followed the sound down three flights and saw Gurley lying wounded.

"I said, 'Oh, my God, someone's hit!" Liang recalled, fighting tears and turning away from the court audience. He took a brief break from the witness stand to compose himself.

As he radioed for an ambulance, Gurley's girlfriend, Melissa Butler, tried to resuscitate Gurley, following instructions relayed by a neighbor who was talking to a 911 operator.

Yet Liang did not try to help. He said he thought it would be better to wait for professional aid.

Prosecutors questioned that decision and sought to show that he had been trained in handling firearms and unexpected, risky situations. Outside court, Gurley's relatives called for Liang to be held accountable for what they see as a callous killing.

The shooting came in a year of protests and nationwide debate about police use of force, especially after grand juries declined to indict white police officers in the deaths of Eric Garner in New York and Michael Brown in Missouri. Both Garner and Brown were black and unarmed.

Gurley, too, was black. Liang is Chinese-American.