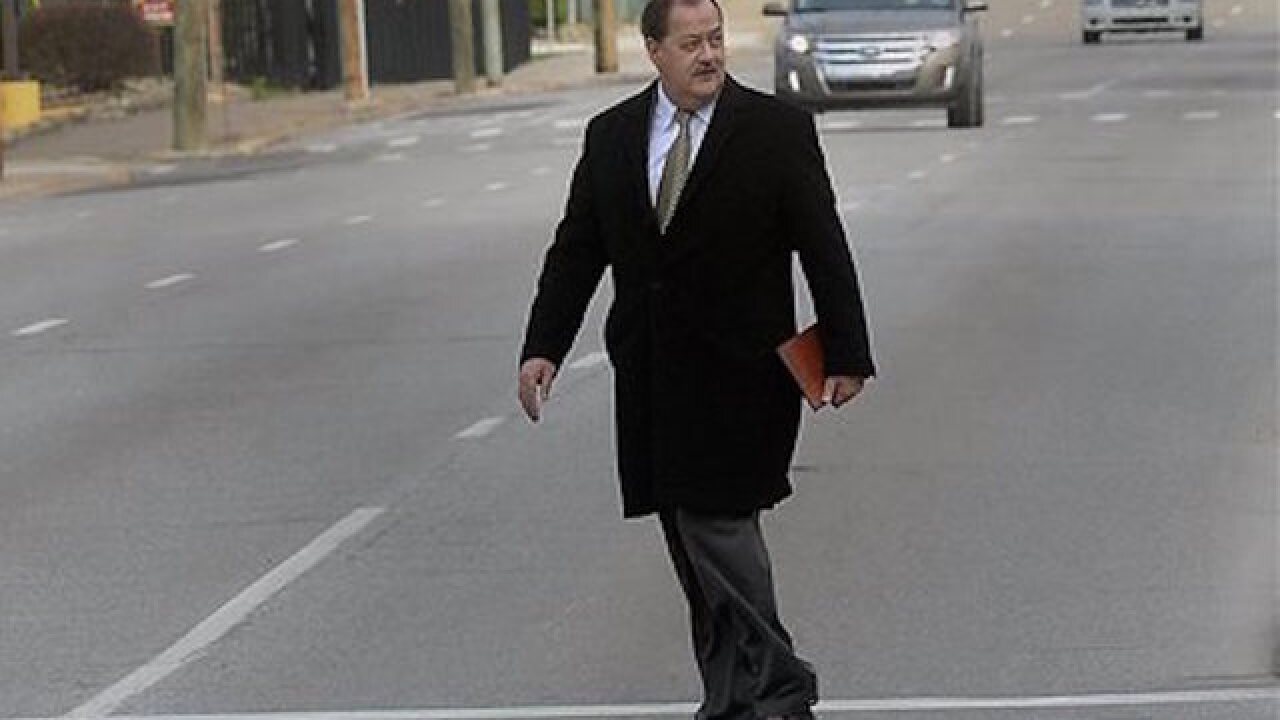 F. Brian Ferguson
<p>Former Massey Energy CEO Don Blankenship makes his way across Virginia Street in Charleston, W.V., before entering the Robert C. Byrd Federal Courthouse for his sentencing on Wednesday, April 6, 2016. Blankenship faces up to one year in prison and maximum fine of $250,000 for a conviction connected to the deadliest U.S. mine explosion in four decades. Prosecutors also contend he should be held liable for $28 million in restitution to a coal company related to the case. (F. Brian Ferguson/The Gazette-Mail via AP)</p>

CHARLESTON, W.Va. (AP) — A judge sentenced former coal executive Don Blankenship to a year in prison Wednesday for his role in the deadliest U.S. mine explosion in four decades, saying he was part of a "dangerous conspiracy."

One day after the sixth anniversary of the Upper Big Branch Mine explosion, which killed 29 men, U.S. District Judge Irene Berger gave the ex-Massey Energy CEO the maximum prison time and fine of $250,000. A federal jury convicted Blankenship on Dec. 3 of a misdemeanor conspiracy to violate mine safety standards at Upper Big Branch.

Blankenship spoke briefly during the sentencing hearing and said he wanted to reassure the families of the fallen miners that they were "great guys, great coal miners." The main point he wanted to express, he said, was "sorrow to the families and everyone about what happened."

In his next breath, he denied culpability.

"It is important to everyone that you know that I'm not guilty of a crime," Blankenship said.

Blankenship's attorneys contended he should receive probation and a fine, at most. The judge denied their motion for Blankenship to remain free as he appeals. It's not clear when he must report to prison.

As Blankenship left the courthouse, a few family members of miners who were killed started yelling at him while he and his attorneys spoke with reporters.

"We buried our kid because of you," said Robert Atkins, whose son Jason died in the explosion. "That's all I got is a goddamn tombstone."

Asked by a reporter what he had to say to the shouting family members, Blankenship said: "Well, just that the coal miners didn't cause the accident."

Then about a half-dozen law enforcement officers surrounded Blankenship and his team and ushered them into an awaiting van.

"This administration continues to support efforts in Congress to strengthen those penalties, and we stand ready to work with members who believe that no worker should lose their life for a paycheck," Perez said in a news release.

At Upper Big Branch, four investigations found worn and broken cutting equipment created a spark that ignited accumulations of coal dust and methane gas. Broken and clogged water sprayers then allowed what should have been a minor flare-up to become an inferno.

Blankenship disputes those reports. He believes natural gas in the mine, and not methane gas and excess coal dust, was at the root of the explosion.

Sens. Joe Manchin and Shelley Moore Capito and the United Mine Workers of America spoke favorably about the decision. The sentencing capped a wide-spanning investigation into Massey following the explosion. Four other workers in the corporate chain were convicted of crimes including faking a foreman's license, lying to federal investigators and conspiring in an illegal scheme to warn miners and other subsidiaries of surprise safety inspections. Their sentences ranged from less than a year to more than three years in prison.

The judge described Blankenship's rise from a meager, single-mother Appalachian household to one of the wealthiest, most influential figures in the region and in the coal industry.

"Instead of being to be able to tout you as a success story, we are here as a result of your part in a dangerous conspiracy," she said.

During the trial, prosecutors called Blankenship a bullish micromanager who meddled in the smallest details of Upper Big Branch. They said Massey's safety programs were just a facade — never backed by more money to hire additional miners or take more time on safety tasks.

Blankenship was acquitted of felonies that could have stretched his sentence to 30 years.

On Wednesday, lead defense attorney William Taylor said the former U.S. attorney was "using this case as part of the reason to vote for him." Booth Goodwin left the office shortly after Blankenship's conviction to run for governor.

"Well, when all else fails, attack the prosecutor," Goodwin said after the sentencing.

In 2011, Alpha Natural Resources, which bought Massey after the explosion, agreed to pay $210 million to compensate grieving families, bankroll cutting-edge safety improvements and pay for years of violations by Massey Energy. Under the deal with federal prosecutors, Alpha wasn't criminally charged.