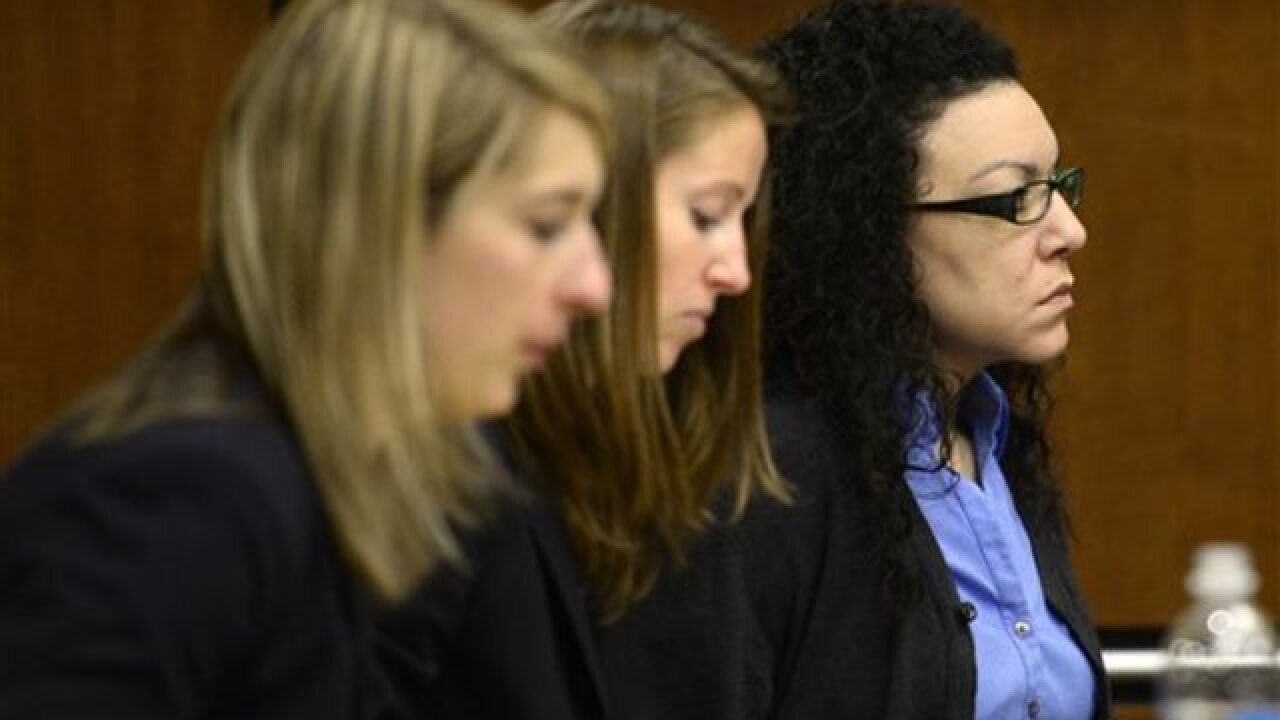 BOULDER, Colo. (AP) — A Colorado woman who went to great lengths to convince others she was pregnant before cutting a stranger's unborn baby from her womb was convicted Tuesday in a gruesome attack that reignited the national debate over the legal rights of fetuses.
Jurors found Dynel Lane, 36, guilty of attempted first-degree murder, assault and unlawful termination of a pregnancy in the March 2015 attack on Michelle Wilkins, who was 7 ½ months pregnant. Wilkins survived, but her unborn daughter died.
Lane sat straight and was quiet as the judge read the verdict. Wilkins sat clasping the hands of an older man sitting with her in the courtroom.
Lane, who had posted online photos of herself with a distended belly and sent her husband ultrasound pictures, lured Wilkins, 27, to her home with a Craigslist ad for maternity clothes. Wilkins testified during trial that they chatted for about an hour before Lane hit, pushed and tried to choke her, then used two kitchen knives to cut the baby from her womb.
The case stunned the foothills community of Longmont and reignited a highly charged debate playing out nationwide over whether a fetus can legally be considered a human being. District Attorney Stan Garnett said he could not charge Lane with murder because a coroner found no evidence the fetus lived outside the womb.
That roiled anti-abortion groups and prompted Colorado Republicans to introduce legislation that would have allowed prosecutors to file murder charges for killing a fetus, but Democrats rejected the measure. It was the third time such a proposal failed in Colorado, setting it apart from 38 states that have made the killing of a fetus a homicide over the objection of many abortion-rights supporters.
Wilkins said she knew she had to survive for the sake of her unborn child and tried to fight back, telling Lane she loved her, hoping that would make her stop.
Lane replied, "'If you love me, you'll let me do this,'" and stabbed her in the neck with a piece of broken glass, Wilkins testified.
Lane's attorneys did not dispute that she attacked Wilkins but argued there was no evidence it was a calculated murder attempt. They said the assault was haphazard and impulsive and urged jurors to convict Lane of the lesser charge of attempted manslaughter.
Prosecutors said Lane was obsessed with pregnancy. Her longtime boyfriend, David Ridley, testified that she claimed for more than a year that she was expecting a boy, whom they planned to name James. Friends even threw her a baby shower.
When Ridley came home early from work to meet her for a prenatal appointment, he said he found the infant in a bathtub. He drove them both to a hospital, where Lane, holding the still-wrapped baby, told staff she gave birth at home.
Doctors testified she refused treatment, until a forensic nurse examined her and found no signs that she had recently given birth.
Lane has two daughters and lost a 19-month-old boy in a drowning accident in 2002.
Associated Press 2016