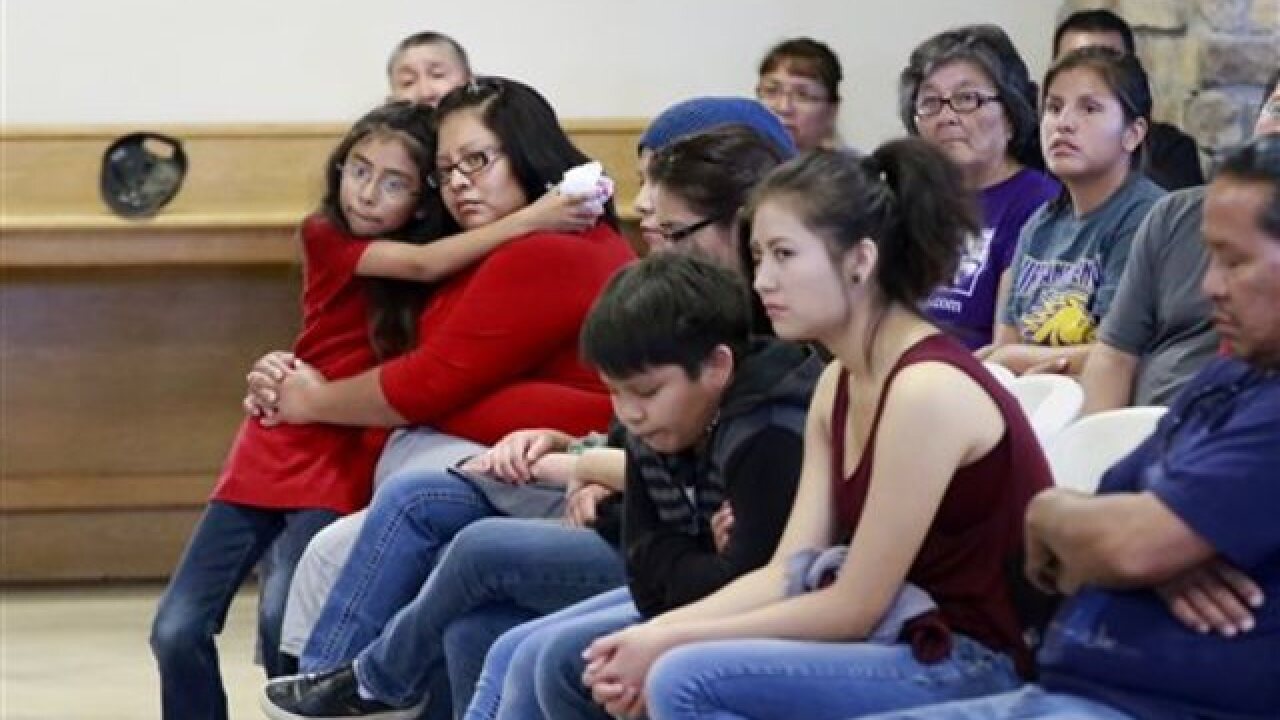 Steve Lewis
<p>Kynareth Longoria, 7, left, and Letitia Buck, second from left, and other family members mourn for Ashlynne Mike during a vigil for her at the Nenahnezad Chapter House., on Wednesday, May 4, 2016, in Fruitland, N.M. Tom Begaye Jr. was arrested later Tuesday in the death of 11-year-old Ashlynne Mike. He made his first appearance Wednesday before a federal magistrate in Farmington. (Steve Lewis/The Daily Times via AP) MANDATORY CREDIT</p>

Several hours after a stranger abducted an 11-year-old Navajo girl as she played near her home, few outside the reservation knew she was missing.
Cellphone alarms jolted New Mexico residents at 2:30 a.m. Tuesday, giving the first warning beyond the Navajo Nation to keep watch for Ashlynne Mike and the man who lured her into his van. He took the girl and her brother Monday afternoon soon after they got off the school bus in a desolate stretch of the reservation.
The Amber Alert's delay has drawn sharp criticism from those who believe more could have been done to find Ashlynne alive, while others say issuing it earlier would have made little difference. Officials and community members say it took too long for information to get from the tribe to the outside authorities who could help, wasting precious search time.
"My phone buzzed and I realized that this has gotten really serious. Why did it take so long for the Navajo Nation to issue an Amber Alert?" said Rick Nez, president of the tribe's San Juan Chapter, where Ashlynne lived.
The country's largest American Indian reservation does not have a system to issue its own child abduction alerts, and a fraction of the 566 federally recognized tribes do. In most cases, state authorities coordinate with the National Center for Missing and Exploited Children to send word about abductions of children in danger of serious injury or death.
Efforts for the Navajo Nation to implement its own alert system have not materialized. The tribe was one of 10 named in a 2007 pilot project through the U.S. Justice Department to expand Amber Alerts into Indian Country.
Heidi Jose, a relative of Ashlynne's, said she has long felt Navajo police are slow to react to reports of missing people and requests for help from residents. She and dozens of others questioned the delay in the time that police learned the girl was missing and when surrounding agencies got word to provide re-enforcement.
"Why is it that they're not snapping their fingers, you know, and saying, 'A child is missing. OK, let's go,'?" Jose said. "This is something that for them — the Navajo police — is a wake-up call."
Navajo police Capt. Bobby Etsitty says the delay stemmed from a lack of information on the abduction and the suspect and from the time it took to notify outside authorities.
Tribal officials didn't know that a man in a maroon van had nabbed the children until the 9-year-old brother arrived at a police station in the New Mexico community of Shiprock, having been picked up by a passer-by. The boy said the man took his sister into the hills and returned without her.
Ashlynne's body was discovered Tuesday morning. Funeral services are scheduled for Friday in Farmington, the same day Tom Begaye Jr. is to appear before a federal judge in Albuquerque. He has been charged with kidnapping and murder in Ashlynne's death.
The investigation began after the children's family reported them missing to police around 6:30 p.m. Monday, said Ashlynne's uncle, Shawn Mike. Her brother showed up at the police station around 7:15 p.m. and struggled to recount the kidnapping.
Shiprock police sent a basic description of the suspect and his vehicle about an hour later: a man with spiky hair in a red van with tinted windows. Authorities didn't know which way it was headed.
About 20 minutes later, an aunt of Ashlynne's went to the Farmington Police Department, frustrated that an Amber Alert had not been issued, police Lt. Taft Tracy said. He called the FBI, which knew of the kidnapping.
The local sheriff's office said it found out by chance around 9:30 p.m. when talking to the bureau about an unrelated case.
"We struggle sometimes with communications between agencies and especially with the Navajo Nation," San Juan County Sheriff Ken Christensen said. "We'll expend all resources when it comes to a child. We want to get that kid back alive."
The FBI handles major crimes in Indian Country when the suspect, victim or both are American Indian. It notified the National Center for Missing and Exploited Children at 12:20 a.m. Tuesday of the need for an Amber Alert, and the organization informed New Mexico State Police of the abduction, the center's Robert Lowery Jr. said.
State police had to ensure it met the proper criteria, and an Amber Alert was sent out more than two hours later.
Lowery said the need for an alert intended to rescue a missing child dwindled because tribal police had credible information from Ashlynne's brother that the kidnapper drove off without her.
Crews began looking for her Monday, but the search focused on the opposite side of the highway from where she was found.
Etsitty said Navajo police followed all protocols in getting an Amber Alert issued. But Navajo President Russell Begaye, no relation to the suspect, acknowledged this week that the tribe needs a more effective response system using modern technology.
Tribal lawmakers are seeking an explanation for the delay.
The case also sparked a renewed effort to ensure officers know how to respond appropriately to child abduction cases and gather information for Amber Alerts, Etsitty said.
"I imagine any and everything could be improved," he said.
Associated Press 2016