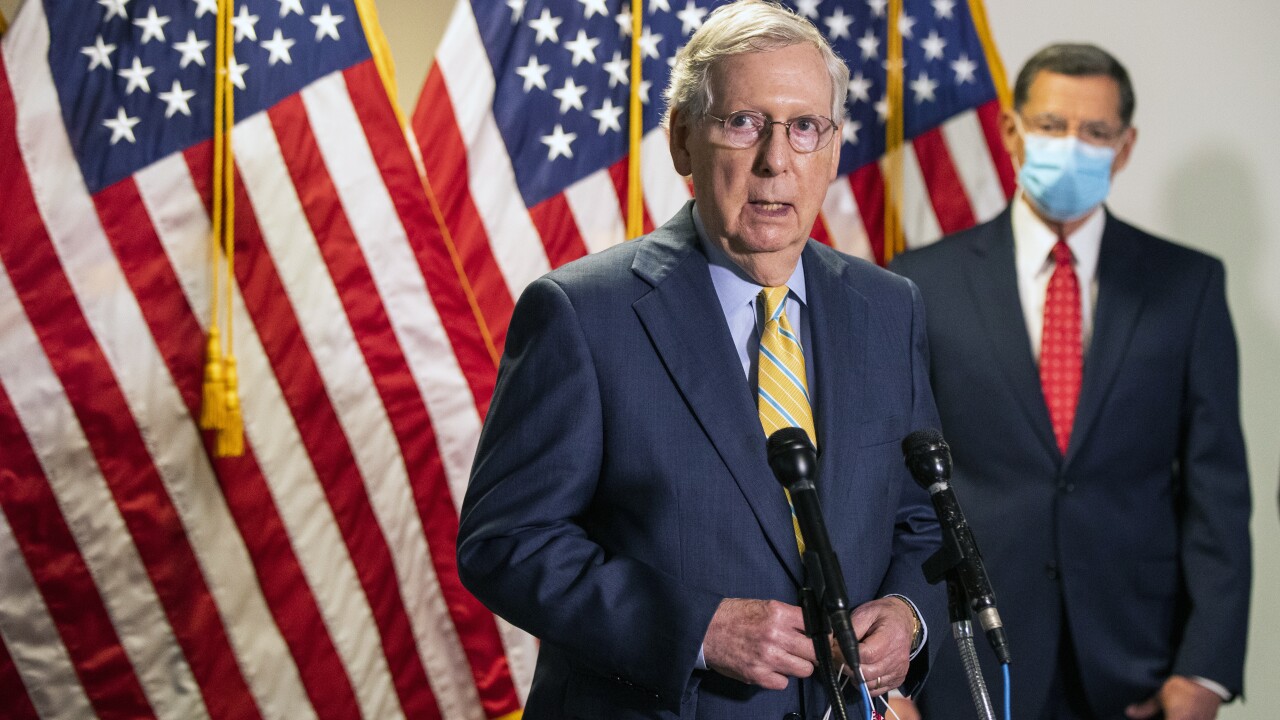 Copyright 2020 The Associated Press. All rights reserved.
Manuel Balce Ceneta/AP
FILE - In this June 30, 2020, file photo, Senate Majority Leader Mitch McConnell, R-Ky., with Sen. John Barrasso, R-Wyo., speaks to reporters following a GOP policy meeting on Capitol Hill in Washington. President Donald Trump’s push to reopen schools is being complicated by a split within his ranks over how to do it. Some advisers are advocating for a massive federal expenditure to make campuses safe. This comes Congress is compiling the next COVID-19 relief bill. McConnell said July 13 schooling will be a priority in the coming package. (AP Photo/Manuel Balce Ceneta, File)

HIGHLIGHTS OF THE ACT:

- $1,200 stimulus checks for the same group of Americans who received a check in the spring
- $106 billion in funds for schools to hire staff and conduct social distancing
- Replenishing the Paycheck Protection Program, intended to help businesses keep employees on payroll
- Extending unemployment supplement, although at a lower amount
- Liability protection for businesses reopening amid the pandemic

McConnell, who called out Democrats for “stonewalling,” had not taken up a stimulus bill passed by House Democrats in May. He urged Democrats to join in negotiations.

The HEALS Act will include a second round of stimulus funds for the same group of Americans who received the last stimulus check. The previous economic stimulus check was $1,200 for most American adults making less than $75,000 per year. McConnell said there will be additional assistance for those caring for adult vulnerable dependents.

The HEALS Act will also include replenishing Paycheck Protection Program funds, which were given to businesses to help keep employees on payroll during the height of the pandemic.

The act will also include a supplement for unemployment, which ran out last week. Since the spring, the federal government provided a $600 per week supplement to unemployment checks. But there is still a disagreement on how much this supplement should be, as President Donald Trump and some Congressional Republicans complained that the supplement gave an incentive to lower income employees to not return to work.

Schumer said that the Republican proposals do not go far enough, and criticized McConnell for not submitting a single bill, but instead a series of proposals.

“The Republican proposal will ignore not one or two or three but scores of major crises in America right now,” Schumer said. “In addition, based on what the leader has said, the Republican proposal won't go nearly far enough, even if the pieces they try to do something with, the small number, the disparate number, the unaggregated number, since each piece seems to be separate because they can't seem to get agreement among themselves.”

The issue, Schumer says, is that the White House has its own set of proposals its ready to outline. But it appears on an issue concerning most Americans, a second stimulus check, there is agreement among Congressional Democrats, Republicans and the White House.

“There's a $1,200 check coming. That is going to be part of the new package,” White House economic adviser Larry Kudlow said on CNN’s “State of the Union.

But neither Schumer nor McConnell addressed a rapidly growing deficit, as revenue into the IRS has declined while expenditures go up. In the month of June along, the federal deficit was $863 billion. Overall, the federal deficit for the first nine months of fiscal year 2020 was $2.7 trillion.

Before this year, there has never been a budget deficit of more than $1.4 trillion in the US.