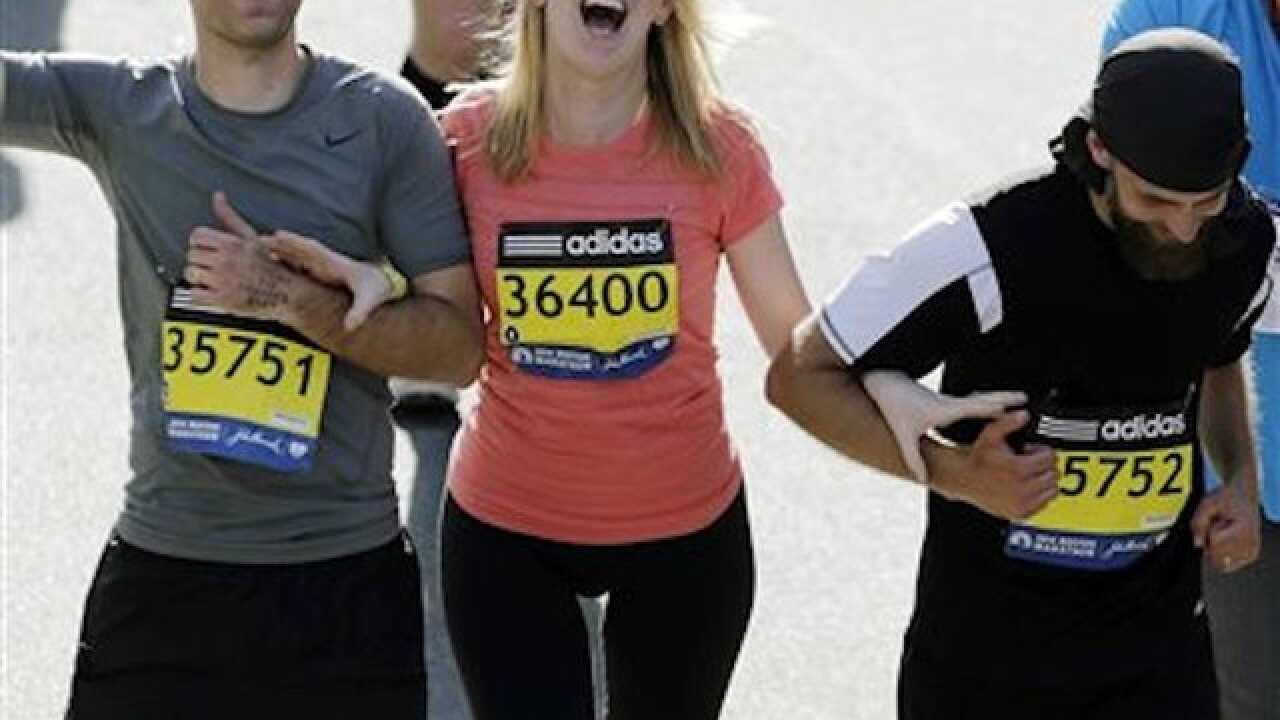 Copyright Associated Press
Charles Krupa
<p>In this April 21, 2014 file photo, Timothy Haslet, left, and David Haslet, right, celebrate with their sister Adrianne Haslet-Davis at the finish line of the 118th Boston Marathon, after she completed a short distance of the course in Boston. Haslet-Davis said she is training to run the entire Boston Marathon on Monday, April 18, 2016. Haslet-Davis lost her left leg below the knee in the April 2013 bombing attacks, which killed three people and wounded more than 260 others. (AP Photo/Charles Krupa, File)</p>

BOSTON (AP) — A professional ballroom dancer who lost a leg in the Boston Marathon bombings says she's training to run this year's race: all 26.2 miles of it.

Haslet-Davis, 35, lost her left leg below the knee in the April 2013 attacks, which killed three people and wounded more than 260 others.

She said she's up to 10 miles in training, using a carbon-fiber blade to help fulfill a promise she made to herself after the attacks — a vow, she jokes, "that I made while I was doped up on Vicodin."

"I'm really excited and slightly terrified," she told The Associated Press in a telephone interview after announcing her intentions Tuesday in an appearance on the Hallmark Channel.

In 2014, during the first running of the marathon after the bombings, Haslet-Davis ran the last few blocks of the course with her brothers. Last spring, wearing a long flowing gown and heels, she and a partner danced a foxtrot across the finish line.

"I knew it would be powerful if I were able to do that - not only for myself but for other amputees who are saying, "I can't do this or that.'"

The Boston Marathon's 120th running will be held April 18.

Haslet-Davis was near the finish line, cheering for the runners, when the second of the two bombs exploded.

In some of the rawest testimony heard during last year's federal trial of admitted bomber Dzhokhar Tsarnaev, who was convicted and sentenced to death for his role in the attacks, she recalled hugging her husband tightly after the first bomb went off down the street and saying: "The next one's gonna hit, the next one's gonna hit."

The next thing she knew, she was on the ground, her leg shredded and bleeding heavily.

Since then, she has resumed her pro dancing career and has been traveling the country as an event speaker.

Running? Not so much. She admits she could dance for hours but "couldn't run a block" until she recently started training seriously.

"I'm not a runner," said Haslet-Davis, who's known for teasing family and friends: "If I'm running, you should be, too, because something's wrong."

Shelley Dutton, development director for Limbs for Life, said the foundation is grateful for the visibility and awareness Haslet-Davis' run will provide.

"For her to be able to do this three years after the loss of her leg is exceptional," Dutton said. "It's a tremendous road back. She's reached some incredible milestones."