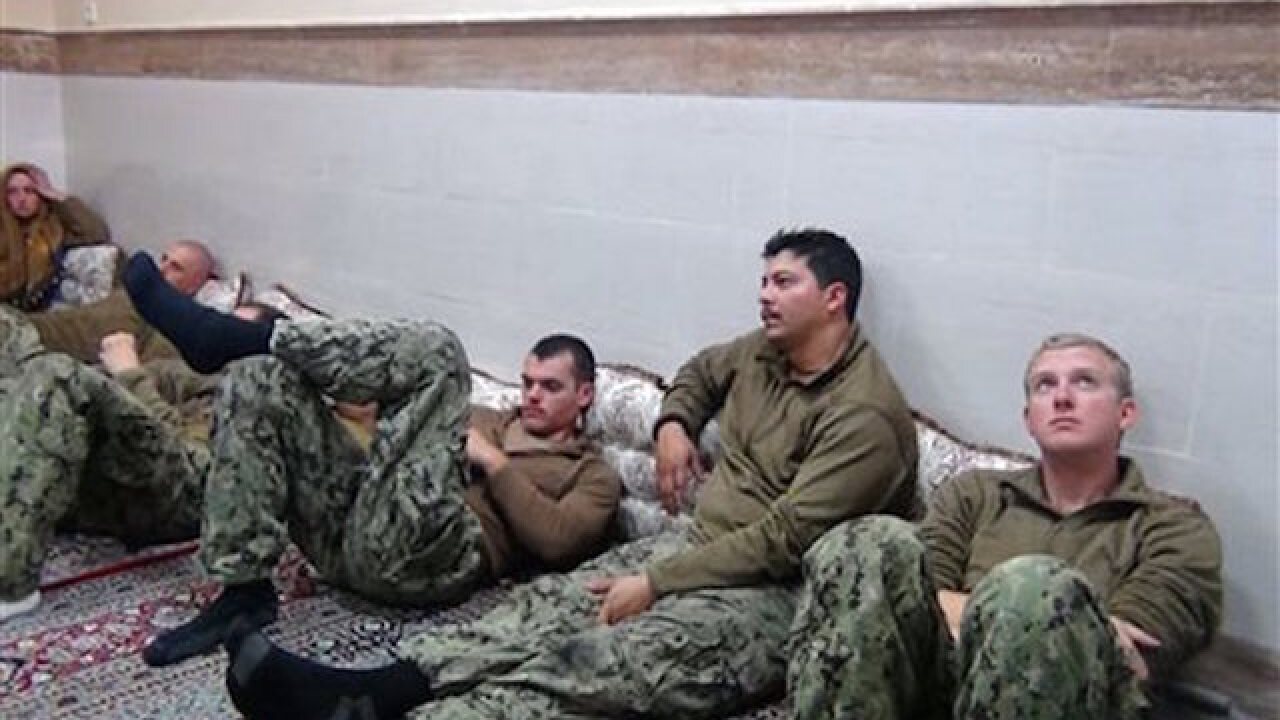 UNCREDITED
<p>This picture released by the Iranian Revolutionary Guards on Wednesday, Jan. 13, 2016, shows detained American Navy sailors in an undisclosed location in Iran. Iranian state television is reporting that all 10 U.S. sailors detained by Iran after entering its territorial waters have been released. Iran's Revolutionary Guard said the sailors were released Wednesday after it was determined that their entry was not intentional. (Sepahnews via AP)</p>

TAMPA, Florida (AP) — Defense Secretary Ash Carter said Thursday it appears a navigational error caused the crews of two Navy boats to stray into Iranian waters in the Persian Gulf, where they were detained overnight by Iran and released.

"It does appear — the information that they have given us and through their commanders — that they did stray accidentally into Iranian waters due to a navigation error," Carter said in an interview in Miami with Fusion network. Later, he flew to Tampa to meet with leaders of U.S. Central Command, which oversees the U.S. military in the Middle East.

"They obviously had misnavigated ... that's how they believe they ended up in this circumstance," he added. "They did not report this navigational error at the time. It may be that they were trying to sort it out at the time they encountered Iranian boats. ... We don't know that fully yet."

Less than a day after being detained on Iran's Farsi Island in the Gulf, the 10 sailors were back with their American fleet. Navy officials said the 10 were undergoing what the military calls "reintegration," a series of interviews and physical and mental health examinations to ease their return to duty. A Navy investigation will ensue.

The Navy has given no indication that the 10 were injured or mistreated.

A complete picture of what happened is unlikely to be available for days, but the central cause for the crews' entering Iranian waters was the navigational slip, which apparently was caused by human error rather than by an equipment malfunction, defense officials said. The boats, known as riverine command boats, were en route from Kuwait to Bahrain.

The navigational error cited by Carter was compounded by some sort of engine trouble aboard one of the boats, another U.S. defense official said. The engine problem did not cause the boats to go off course but apparently prevented them from evading the Iranians once the crews realized they were inside Iran's territorial waters.

The Navy realized the boats were missing when they failed to appear shipside in the Gulf for refueling on their way to Bahrain, one defense official said. GPS devices aboard the boats enabled the Navy to determine, after the fact, that they were in Iranian waters, but the Navy was not immediately sure whether the crew members were safe or had gone overboard. So a search-and-rescue operation was undertaken, and at least one U.S. ship crossed into Iranian waters to look for the crew after alerting the Iranian navy of their intentions. The Iranians did not interfere, the defense official said. The official was not authorized to discuss these details and spoke on condition of anonymity.

Secretary of State John Kerry used the personal relationship he has formed with Iranian Foreign Minister Mohammad Javad Zarif to work out the crews' release. Kerry credited the quick resolution to the "critical role diplomacy plays in keeping our country secure and strong."

Carter said the sailors were not on a covert mission and were simply making their way from Kuwait to Bahrain, both on the western coast of the Gulf. They ended up in Iranian territorial waters at least 50 miles offshore and were detained by the Iranian military at Farsi Island, which is home to an Iranian naval base.

Navy officials said the families of the 10 crew members were kept abreast of developments once it was confirmed that the Iranians were holding them.