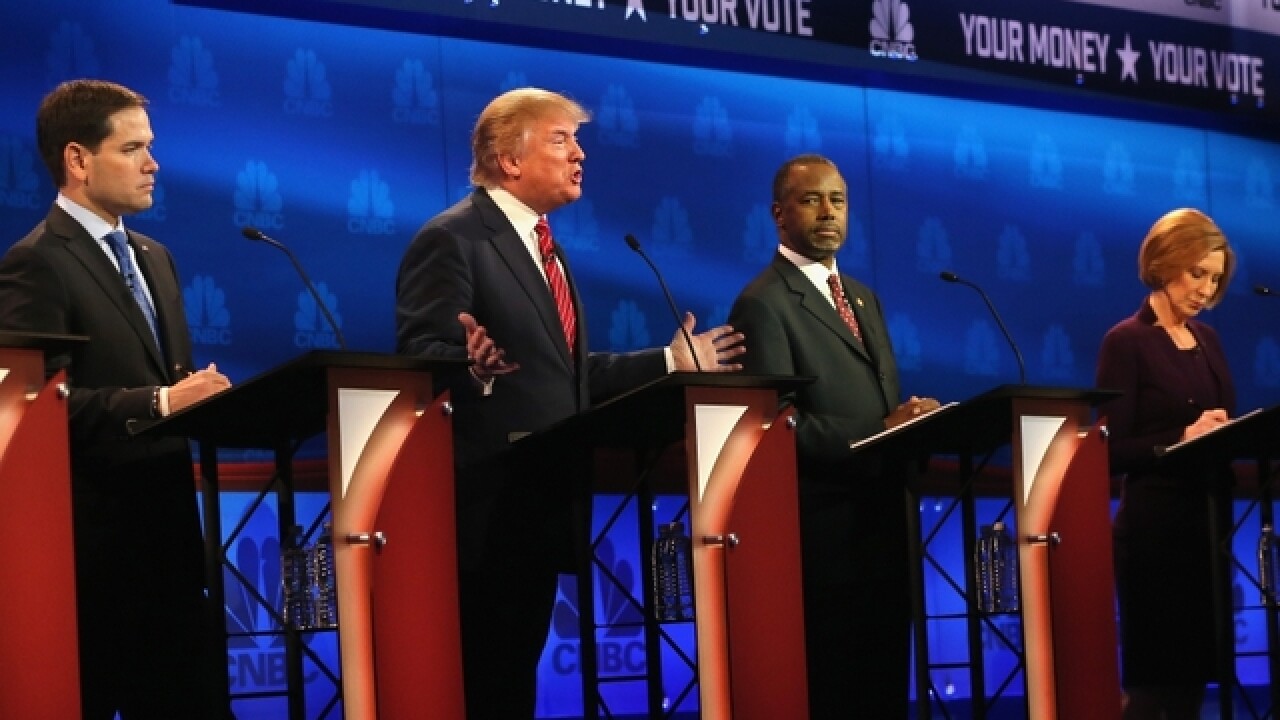 Political campaigns are hectic, expensive undertakings. Candidates and their staffers travel all over the country by planes, trains and automobiles. They eat at roadside diners and in the drive-thru lane, and fuel up for campaign rallies and fundraisers at Dunkin’ Donuts and Starbucks. Indeed, an InsideGov analysis of campaign finance data found presidential campaigns have spent $2,661 at Starbucks in this cycle.

InsideGov, a politics site that’s part of the Graphiq suite of research tools, decided to look more closely at how 2016 White House hopefuls spent their campaign cash. Using expenditure data from the Federal Election Commission and the Sunlight Foundation , InsideGov picked out some of the quirkiest purchases made by the presidential campaigns. The data covers Jan. 1, 2015 to Feb. 29, 2016, and the list is ranked from smallest to largest amount spent.

Carly Fiorina’s staffers had a handful of throwback moments during the campaign, employing a fax service for documents. One can only assume they used a Hewlett-Packard machine , considering Fiorina was the CEO of the tech company for six years.

On Feb. 20, 2016, Vermont Sen. Bernie Sanders' campaign paid $450 for snow removal in Massachusetts. That was 11 days before the Bay State’s primary, which was part of Super Tuesday voting. Former Secretary of State Hillary Clinton eked out a victory there over Sanders.

Everyone loves a gooey grilled cheese, especially if it comes from a food truck, right? Texas Sen. Ted Cruz’s campaign thought so, too. The Republican presidential hopeful spent more than $1,200 last June at Golden Grill Food Truck , based in Houston.

New Jersey Gov. Chris Christie’s staffers liked their Subway sandwiches. Christie's presidential campaign spent $1,722.26 at a Subway in Manchester, New Hampshire, on Dec. 30, 2015. That comes out to about 344 of those $5 footlongs the sandwich chain likes to sing about.

If America runs on Dunkin’, then what’s more American than having a presidential campaign powered by the donut chain? Republicans and Democrats alike have dropped some serious dough at the popular purveyor of coffee and donuts.

Last year, Hillary Clinton’s campaign spent more than $15,000 on catering and audio-visual services at Jay Z’s Manhattan bar, the 40/40 Club . The former secretary of state held a fundraiser at the nightclub on Sept. 30, 2015.

Back in November, Vocativ reported that Hillary Clinton’s presidential campaign leaned heavily on pizza when it came to fueling staffers and volunteers. The trend has continued, with the Clinton team dropping over $17,000 on pizza across the country.

Black Rock Group is a political consulting firm based in the D.C. suburb of Alexandria, Virginia. It has deep ties to Republican super PACs American Crossroads (which is connected to Karl Rove) and Restore Our Future (which backed Mitt Romney’s 2012 presidential campaign). During this campaign cycle, New Jersey Gov. Chris Christie’s team paid Black Rock over $46,000 for political strategy and communications consulting.

Turns out the popular ride service has the corner market among presidential campaigns, too. Campaign finance filings show that almost $112,000 has been spent on Uber rides during the 2016 presidential race. As the visualization shows, former Florida Gov. Jeb Bush’s campaign has spent the most on Uber rides, at a little over $23,000.

During the 2016 presidential contest, former Arkansas Gov. Mike Huckabee leaned on Internet ads to gin up support for his campaign.

Like many of her fellow presidential contenders, Carly Fiorina’s team traveled on well-known airlines like United and Southwest. But the campaign also spent almost $121,000 at Advanced Aviation Team , a private jet company.

Wisconsin Gov. Scott Walker entered the presidential contest an early favorite , what with his ties to the Republican establishment and his standing as a tea party darling. Since many political prognosticators anticipated Walker would go the distance, the $135,000 spent on campaign gear likely made sense at the time. But after dismal polling numbers and just 10 weeks on the trail, Walker called it quits .

Protesters and violence have been a recurring theme for Donald Trump’s campaign rallies. At the end of April, 17 people were arrested in Southern California after protests broke out at a Trump event.

According to the campaign’s filings with the Federal Election Commission, Trump has spent almost $190,000 on "security services" and "security consulting" in 2015 and the first two months of this year.

Ted Cruz’s campaign spent more than $300,000 for books and delivery with HarperCollins Publishers, which happens to be the company that published Cruz’s 2015 tome, “A Time for Truth: Reigniting the Promise of America.”

Republican presidential hopeful Marco Rubio was once the establishment’s best hope to fend off Donald Trump’s White House campaign. The Rubio team had the gear to back it up, too, with almost $342,000 spent on bumper stickers, T-shirts, signs, hats and sweatshirts.

Bernie’s got a book, and he wants you to read it. The Sanders campaign spent almost $445,000 with Verso Books, which published Sanders’ “Outsider in the White House” in September 2015. Verso describes itself as “the largest independent, radical publishing house in the English-speaking world,” according to its website .

Donald Trump’s campaign has opted to keep some of its spending in the family. Trump Tower, Trump SoHo hotel, Trump Grill and Trump Payroll Corp are among the namesake businesses the campaign billed for meeting expenses, rent and lodging.

Retired neurosurgeon Ben Carson’s campaign doled out more than $850,000 on pro-Carson shirts and hats, according to campaign filings with the Federal Election Commission.

The Ted Cruz campaign spent close to $1.1 million on a bevy of pro-Cruz hats, posters, shirts, blankets, bumper stickers, banners, stickers, pins, cups, flags, signs and labels. The Texas senator kept it local, too, with $7,942.60 of that going to the aptly named GOP Jerseys LLC, based in Lubbock, Texas.

The Jeb Bush campaign employed multiple private jet companies throughout the presidential race, spending more than $2 million on the services. For people not fortunate enough to land a seat on a chartered flight for work travel, expenditure filings reveal staffers spent $3,511.83 on Gogo inflight Internet services on commercial airlines.

No matter how one feels about Donald Trump’s rollicking ride to the Republican nomination, just about everyone can agree that the former reality TV star is a marketing master. His “ Make America Great Again” visors and hats — in white, red, blue, black and camo — have been a staple on the campaign trail.

A presidential campaign means lots of travel all over the country. Hillary Clinton’s team has employed charter jet company Executive Fliteways throughout the race, to the tune of over $3.6 million.

Ben Carson spent more than $6 million on various types of consultants, whether it was related to political strategy, legal questions, finances or media. That figure balloons to $23,109,713 when accounting for funds the Carson campaign directed to database management and digital media firms run by two people who acted as consultants to his campaign. Mike Murray heads up TMA Direct and Precision Data Management, which received $5,669,648.30 and $545,595.62, respectively. Ken Dawson’s Eleventy Marketing Group got $10,703,049.74 from the Carson campaign.

If you “feel the Bern,” Bernie Sanders’ campaign is making sure you have the tools to show it. The campaign dropped almost $7.5 million on promotional materials. The majority of that sum — $6,908,680.21 — went to Tigereye Promotions , a left-leaning design and product company based in Ohio.