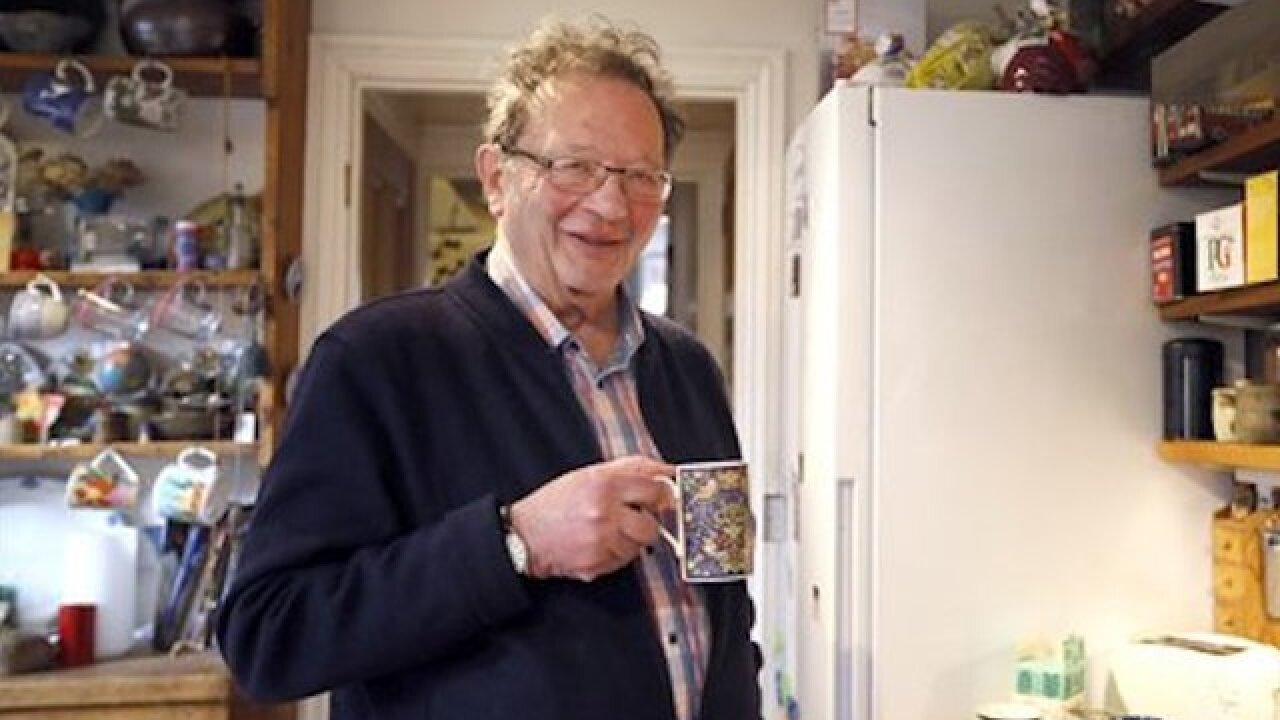 Copyright Associated Press
Kirsty Wigglesworth
<p>Larry Sanders at home in his kitchen in Oxford, England, Monday, Feb. 15, 2016. These are exciting times for Larry Sanders, a stalwart Green Party campaigner in Oxford, England. He's just been appointed to a new job as his party's national spokesman on health. And he's helping out his little brother Bernie with a small electoral campaign on the other side of the Atlantic. Vermont Sen. Bernie Sanders is an outsider who has far exceeded expectations as he battles Hillary Clinton for the Democratic Party's presidential nomination. (AP Photo/Kirsty Wigglesworth)</p>

OXFORD, England (AP) — These are exciting times for Larry Sanders, a stalwart Green Party campaigner in Oxford, England. He's just been appointed to a new job as his party's national spokesman on health. And he's helping out his little brother Bernie with a small electoral campaign on the other side of the Atlantic.

Vermont Sen. Bernie Sanders is an outsider who has far exceeded expectations as he battles Hillary Clinton for the Democratic Party's presidential nomination. The left-wing senator has energized thousands of young supporters with his promise to transform the American economy, education and health care systems, and last week gained more momentum by winning the New Hampshire primary.

More than 3,000 miles (4,800 kilometers) away, his brother, a retired academic who has lived in Britain since 1969, finds himself a "sudden celebrity."

"I was at a meeting the other day and when I stood up to ask a question, half the people in the audience started clapping," Larry Sanders said in an interview with The Associated Press. "I've been going to meetings for 40 years and no one's ever applauded before."

Sanders, who ran for a seat in Britain's Parliament last year (he came fifth of seven candidates), has watched his brother's growing success with emotions that swing from pride to disbelief.

He says he has only recently started to believe that underdog Bernie can do it, "go all the way to the White House."

"Really only in the last month or so did it seem to me that he was going to win the nomination," he said. "I think once he has won the nomination he will find the general election much easier.

"I'm not entirely surprised by it, actually," he added. "I didn't expect it to happen quite so quickly, but I've seen him in action: He's a very powerful politician. And the other thing of course is, the basis of what he's saying is real. ... There has been a shift in wealth and income from the bulk of the population to the very richest, and it goes back 40 years."

At 80, Larry Sanders is six years older than his brother, his Brooklyn accent mellowed by more than four decades in Britain.

He says the brothers' politics are rooted in the post-war Brooklyn where they grew up, the children of "staunch New Dealer" parents. Their father, Eli, was a Polish Jew who came to the United States when he was 17, their mother Dorothy the New York-born child of eastern European Jewish immigrants.

"We were not poor — we had everything we needed — but our parents argued, and what they argued about was money," Sanders said in the kitchen of his modest, century-old house not far from Oxford's historic city center.

"I think a lot of politicians, if they've come from financially secure backgrounds, it doesn't really resonate what it means to have these arguments and to have this tension. And Bernard, without wanting to have it, has it, and it hasn't gone away."

Sanders said that growing up, the brothers were conscious of the shadow of the Holocaust, "because we knew we'd lost relatives, and the consequence of that was that politics was very serious. Lots of kids grow up thinking it's just game-playing."

He said their early values were simple ones learned in public school and Hebrew school: The Declaration of Independence's assertion that "all men are created equal," the Torah's exhortation to be kind to "the stranger among you."

"Tens of millions of people anywhere will have had very similar upbringings," he said. "But Bernard, somehow it stuck with Bernard."

Larry Sanders studied politics at Brooklyn College, where he was involved with the Young Democrats, and discussed political ideas with his younger brother, a good-but-not-great student and a top track athlete.

"I dragged him to some meetings," Sanders said. "He found them incredibly boring, but he came."

"He didn't do very well — he finished third out of three," Sanders said. "But he was the only one who had a serious platform. The others talked more about prom stuff, but he ... (said) the school should raise money for scholarships for Korean orphans."

Later, Larry watched as Bernie charted his own political path — first as part of the civil rights movement in Chicago, then in Vermont, where, as an independent, he served as mayor of Burlington, congressman and senator.

Larry moved to Britain with his late first wife, becoming a university lecturer in health and social care and serving for a decade as an Oxfordshire county councilor. Last week, he was named national health spokesman for the Green Party, which has thousands of members but just one lawmaker out of 650 in Parliament.

He lives with his partner Janet in a cozy house full of books and knick-knacks and toys — they have four grandchildren under 10. A book about Franklin D. Roosevelt lies on a table, as does a neat stack of "Oxford for Bernie" leaflets. Sanders, who still has U.S. citizenship, has been campaigning to get American students at Oxford to back his brother in the Democrats' global primary in March.

Sanders spent five weeks with Bernie on the campaign trail last fall, and was astonished by his stamina.

"I do worry a little bit about his health, but the miracle is that he does it and he thrives," he said. "I think seeing him more recently as things have even gotten better electorally for him, he looks to me more comfortable and more calm. How he does it I don't know. The only connection I can say (is) that his physical constitution as a runner when he was young is part of it. He could run, keep on running — and he did keep on running."

Sanders plans to return to the U.S. for the Democratic National Convention in Philadelphia in July. He has allowed himself to daydream about watching his brother take the presidential inauguration oath — and about visiting him in the White House.

"It's said to be a very good B&B, so we'll take advantage of it," he said. "I won't insist on the Lincoln bedroom."