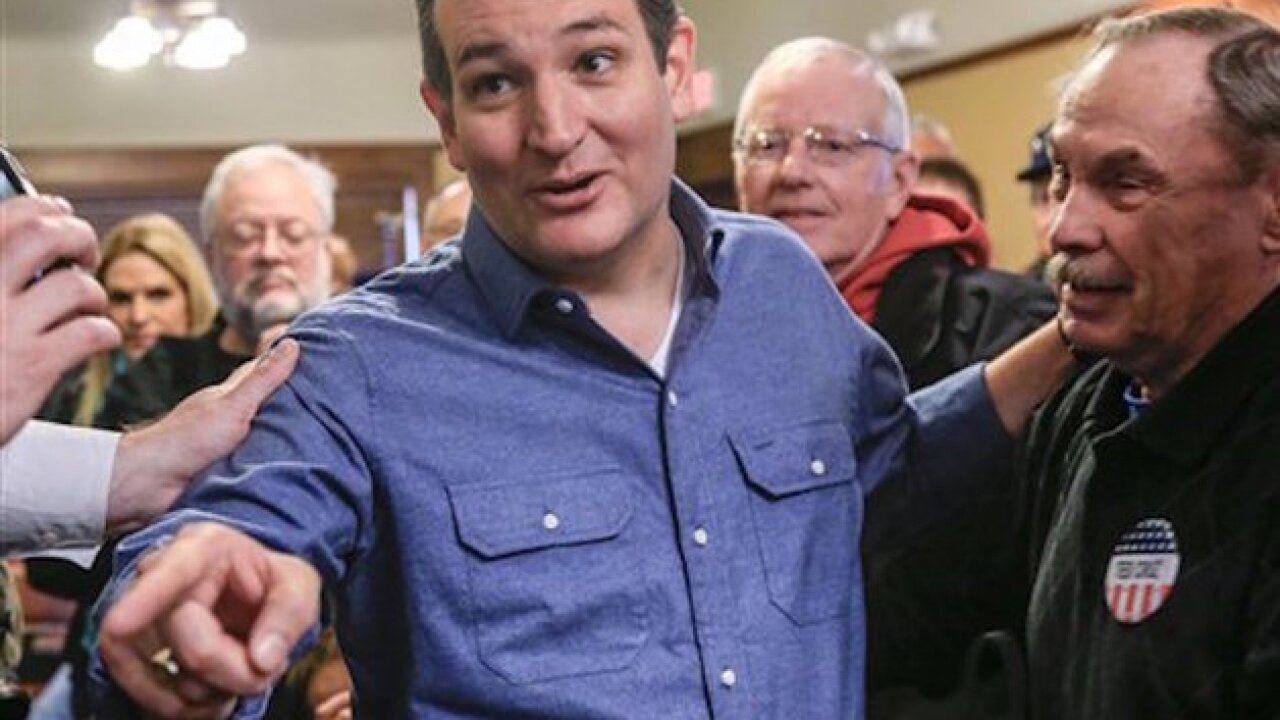 SIOUX CENTER, Iowa (AP) — Ted Cruz tried to make a joke Tuesday out of Republican presidential rival Donald Trump raising questions about whether the Texas senator's birth in Canada could be a liability if he becomes the GOP's nominee.

Trump told the Washington Post in an interview Tuesday that Cruz's Canadian birthplace and his holding a double passport was a "very precarious" issue that "a lot of people are talking about." Trump has ramped up his attacks on Cruz since the Texas senator sprinted ahead of the billionaire businessman in some opinion surveys in early-voting Iowa.

Cruz, in response to questions about Trump's comments, said the best way to respond was to laugh it off and "move on to the issues that matter." He first reacted on Twitter, posting a link to a video from the 1970s television show "Happy Days" showing the character Fonzie water skiing over a shark. The moment, known as "jumping the shark," has come to refer to the use of a gimmick to halt the decline of a television show or other effort.

"What the American people are interested in is not bickering and back and forth," Cruz told reporters before a town hall in Sioux Center that drew hundreds of people. Cruz was concluding the second day of a six-day swing through Iowa before the Feb. 1 caucuses, while Trump was holding a rally in New Hampshire.

The U.S. Constitution says only a "natural born Citizen" may be president. Legal scholars, however, generally agree the description covers foreign-born children of U.S. parents.

Cruz was born in Calgary, Alberta, in 1970 while his parents were working in the oil business there. His mother, Eleanor, is from Delaware, while his father, Rafael, is a Cuban who became a U.S. citizen in 2005. Cruz has said that because his mother is a citizen by birth, he is also one. Under U.S. law, anyone born to a U.S. citizen is granted citizenship no matter where the birth takes place.

Cruz renounced his Canadian citizenship in 2014, amid speculation he was preparing for a presidential run, less than a year after he his birth certificate.

But that didn't stop Trump from raising the issue Tuesday.

"Republicans are going to have to ask themselves the question: 'Do we want a candidate who could be tied up in court for two years?' That'd be a big problem," Trump said in The Washington Post interview. "It'd be a very precarious one for Republicans because he'd be running and the courts may take a long time to make a decision. You don't want to be running and have that kind of thing over your head."

Trump was one of the loudest voices questioning whether President Obama was born in Kenya and thus not eligible to be U.S. president. Obama is an American citizen; his father was Kenyan, his mother American.

Previous foreign-born Americans — notably Republicans John McCain and George Romney — have run for president with some mention, but no serious challenges, of their eligibility.

The comments mark a reversal for Trump, who in September downplayed Cruz's birthplace in an interview with ABC.

"I hear it was checked out by every attorney and every which way and I understand Ted is in fine shape," he told the network then.

But Trump has been ratcheting up his attacks on Cruz in recent weeks.

Trump first unleashed a verbal assault on Cruz in December at an event in Des Moines where he questioned Cruz's evangelical faith.

"I do like Ted Cruz, but not a lot of evangelicals come out of Cuba," he said of the country where Cruz's father, an evangelical preacher, was born.