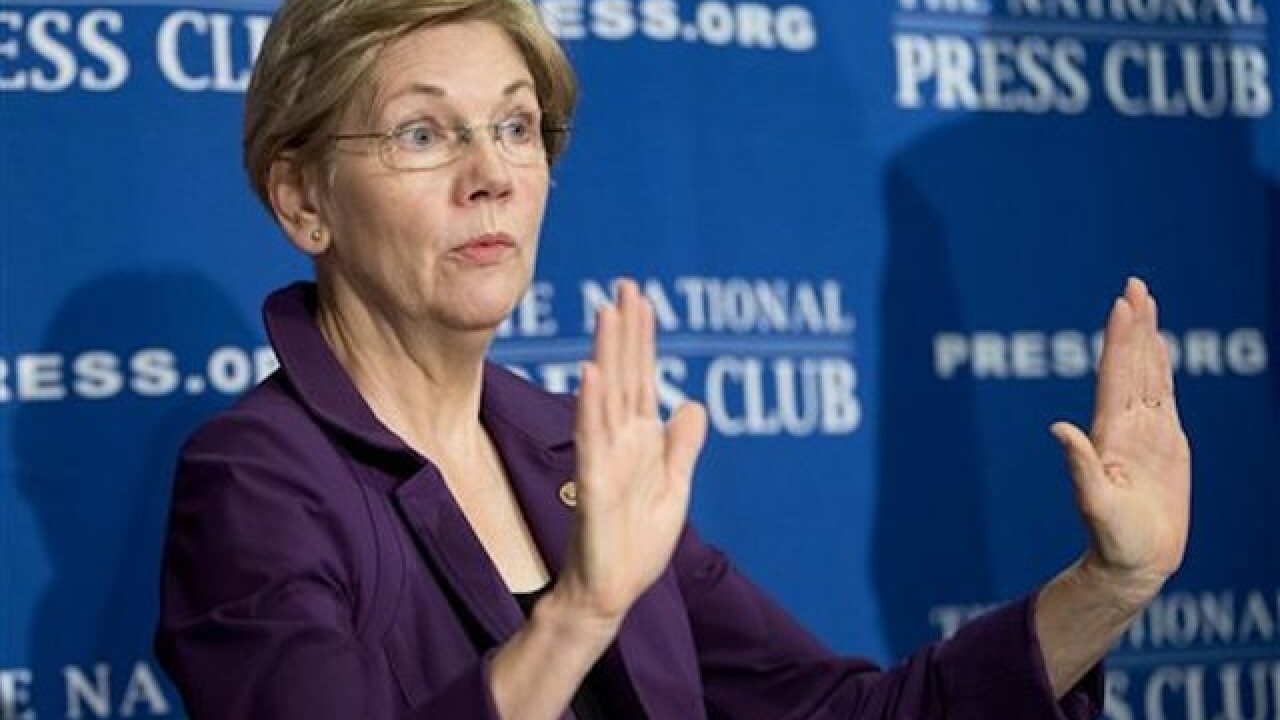 Copyright Associated Press
Pablo Martinez Monsivais
<p>In this Nov. 18, 2015, file photo, Sen. Elizabeth Warren, D-Mass. gestures before speaking at the National Press Club in Washington. A coveted but coy Warren is for now staying painstakingly neutral in the Democratic presidential contest, frustrating Hillary Clintonís and Bernie Sandersí supporters while awaiting the right moment to lay her considerable chits on the table. Both candidates would love to win the endorsement of the populist Warren. (AP Photo/Pablo Martinez Monsivais, File)</p>

WASHINGTON (AP) — Coveted but coy, Massachusetts Sen. Elizabeth Warren is staying painstakingly neutral in the Democratic presidential contest for now, frustrating supporters of Hillary Clinton and Bernie Sanders while awaiting the right moment to lay her considerable chits on the table.

Both candidates would love to win the endorsement of the populist Warren, especially with the primary in next-door New Hampshire on Tuesday. Warren is idolized by an army of liberal voters who were crestfallen that she didn't run herself, and her longtime antipathy toward a financial system that she says is rigged against average Americans is a dominant Democratic theme of 2016.

Yet many in the party say she faces a complicated decision best addressed by letting the race percolate longer while using her leverage to shape the debate with her progressive agenda.

Much of Sanders' criticism of Wall Street and income inequality mirrors Warren's views. But backing the Vermont senator would align Warren against Clinton, seen by most Democrats as their likely nominee. As president, Clinton would be crucial to advancing Warren's policy goals.

Warren and Clinton have had their disagreements, though each advocates a robust government that tackles social and economic problems. Yet endorsing Clinton while Sanders remains a viable candidate could disillusion Warren's exuberant young and liberal supporters, many of whom are now embracing Sanders.

"Elizabeth will make her decision on her own time," said Sen. Amy Klobuchar, D-Minn., who, like other Clinton supporters interviewed, avoided applying overt pressure on Warren.

Of the Senate's 14 Democratic women, Warren is the only one not backing Clinton, a former secretary of state, New York senator and first lady.

Privately, many Democrats said they wonder whether Warren regrets not running herself when she sees how competitive Sanders, her ideological doppelganger, has been. As a candidate, she could have tapped into the same anti-establishment sentiment fueling Sanders' bid while adding the broader appeal of not being a self-proclaimed socialist and being a woman without the questions about emails that have nagged Clinton.

Warren declined to speak to a reporter for this story, and aides did not agree to requests to respond on the record to questions.

The Oklahoma City daughter of a janitor, Warren became a champion of consumer financial issues, author and Harvard law school professor. She pioneered the idea that became the Consumer Financial Protection Bureau, which was created by President Barack Obama's 2010 law overhauling federal financial regulations, and spoke at her party's 2012 presidential convention.

Warren arrived in the Senate amid great fanfare in 2013 after defeating Republican Scott Brown for the seat previously held by the late Edward Kennedy, inheriting Kennedy's mantle as a hero of the left. She has so strenuously opposed Obama's trade treaty with Pacific Rim nations that he once described her as a "politician like everybody else," and she helped derail his nomination to a top Treasury post of an investment banker whom she considered too close to Wall Street.

Such clashes have only endeared Warren, 66, to the party's core liberal voters.

"When Elizabeth Warren speaks, the grassroots listens," said Charles Chamberlain, executive director of Democracy for America, a group behind the "Run Warren Run" effort that failed to persuade her to seek the presidency.

Warren has used her clout to become a potent fundraiser for Democrats and liberal causes. In 2014, she was given a Senate leadership post as a voice of progressives. Now, she's using her influence to push her issues to the 2016 forefront.

Two weeks ago, Warren released a report alleging lax federal treatment of corporate law-breakers and wrote an opinion column in The New York Times that attempted to inject that subject into the presidential contest.

"The next president can rebuild our faith in our institutions by honoring the simple notion that nobody is above the law, but it will happen only if voters demand it," she wrote.

Last week, she spoke on the Senate floor about crippling student debt, her opposition to the Pacific trade treaty and the laxity with which she says the government punishes corporate crimes.

Most Democrats suggest Warren is most likely to endorse Clinton but concede they are not certain. They say the relationship between the two women is wary, fed by a mix of clashes and compliments.

Warren joined other Democratic senators in a 2013 letter to Clinton urging her to run for president. But last November, she was the only female Democratic senator who did not attend an event where the others endorsed Clinton.

Clinton has received huge campaign donations and speaking fees from the same financial giants Warren often combats. Warren has said that Clinton, while a member of the Senate, reversed earlier opposition to Wall Street-backed bankruptcy legislation, a turnabout Clinton has attributed to improvements in the bill.

Yet Warren has praised Clinton for proposing expanded Wall Street regulations and new levies on U.S. companies that merge with foreign firms to reduce their tax bills. And in Time Magazine's list of the 100 most influential people last year, a Clinton-written thumbnail of Warren lauded her for pressing her causes with powerful people, "even presidential aspirants."