For Clintons, N.H. is the state of 2nd chances 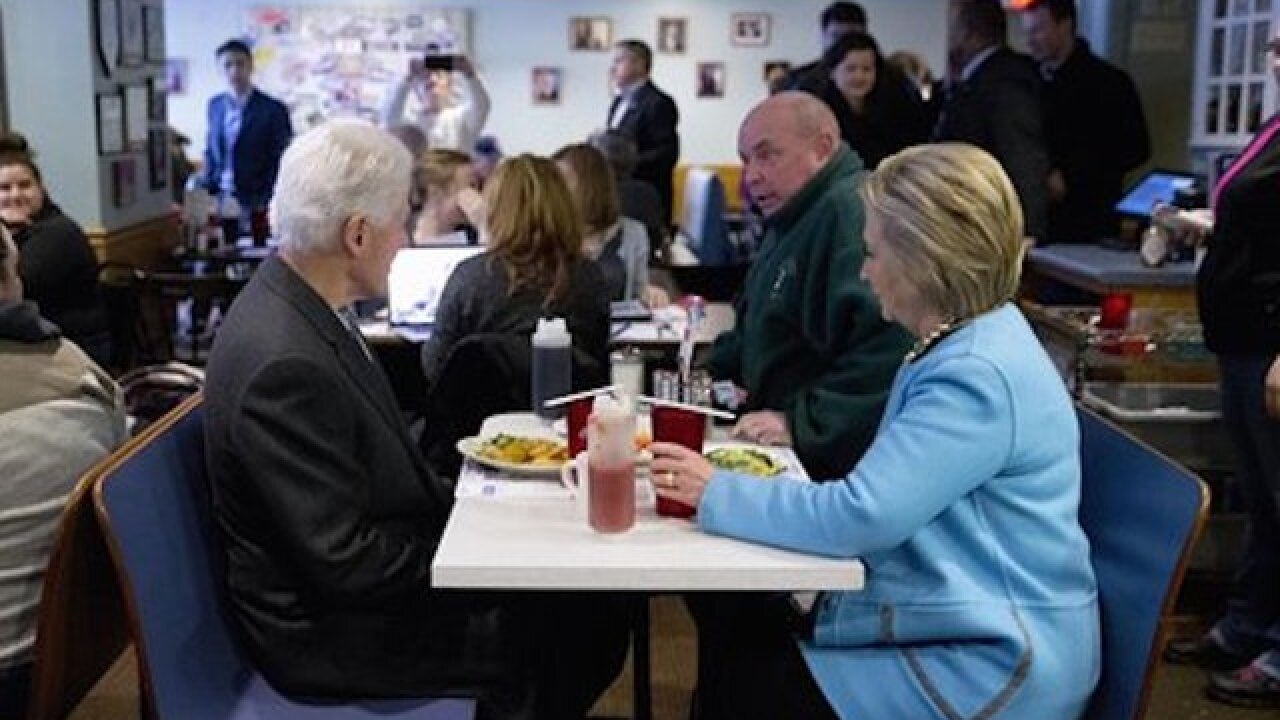 MANCHESTER, N.H. (AP) — It's their Everest. Their firewall. Their lifeboat in a frozen Atlantic.

They are the Clintons. It is New Hampshire. And here we all are again.

For nearly 25 years, New Hampshire has been the backdrop for some of the most memorable Clinton comebacks, pleas, denials, hustle, glory and drama. Now those ghosts of primaries past are trailing Hillary Clinton as she tries — perhaps, one last time — to pull off another one for the history books.

Trailing by double digits, according to some polls, the Clinton campaign is finding it can't escape the expectations and the limits of that "special bond" between the Clintons and voters of New Hampshire on the cusp of Tuesday's primary.

As polling in the final days found a possible tightening in Clinton's contest with Vermont Sen. Bernie Sanders, it was hard not to hear the faint echoes of history. Could this be the beginning of a third storied Clinton comeback in New Hampshire? Could she come close enough to make the claim?

"New Hampshire is legendary for being unpredictable," said Terry Shumaker, a longtime Clinton backer, with caution.

"Comeback" is not a word the Clinton campaign is using. Since barely winning Iowa a week ago, Clinton and her allies have been trying to lower expectations for her performance on Tuesday.

"New Hampshire, because of its location, and Iowa because of the way the caucus works, were probably the two most challenging places for her to start," Bill Clinton told The Associated Press.

As the campaign announced Hillary Clinton would campaign in Michigan over the weekend, a sign she was already looking past New Hampshire, Clinton's pollster, Joel Benenson, declared Friday: "Our goal here is to get close."

Of course, the Clintons have shown that close can be good enough.

In 1992, Bill Clinton spun a second-place showing over Paul Tsongas from neighboring Massachusetts as a triumph for the "comeback kid." New Hampshire — and the Clinton campaign's savvy spin — rescued a near-death campaign beset by accusations of infidelity and draft dodging.

"There have been times when someone coming in second has been the news," noted Shumaker, who co-chaired Bill Clinton's New Hampshire campaign then. He remembers the date (Aug. 5, 1991) he first met the future president, and has photo of him on his screensaver.

In 2008, Hillary Clinton arrived in New Hampshire battered and stunned by a third-place finish in Iowa. She needed a win in New Hampshire to stop the bleeding. She choked up on the stump in a moment of exhaustion. New Hampshire delivered comeback No. 2.

To be sure, the stakes are not as high now.

As her supporters are quick to note, Clinton's current drive for the White House will continue no matter what the results on Tuesday. She will remain the front-runner for a nomination many Democrats still expect her to win — eventually.

But a loss would undoubtedly expose the weakness of her bid. Clintons are expected to struggle in Iowa. But a rout in New Hampshire, their state of second chances? That hurts.

Comparisons between her efforts now and her husband's then would be unavoidable. Bill Clinton's climb in New Hampshire was credited to his ability to connect with white, working-class voters. He related. He won them over. He, famously, promised to "be there for you till the last dog dies" and allies say he kept the promise.

At the moment, Hillary Clinton's weakness is with those working-class voters. Her campaign spent the final days in New Hampshire trying to win over middle-income, middle-aged and working parents.

Clinton's struggle with connection isn't unique to New Hampshire. The state is arguably a place where she's overcome that weakness.

In 2008, her defining campaign moment came on the eve of the primary in Cafe Espresso in Portsmouth. When she was asked simply "How do you do it?" she appeared to be holding back tears, as she answered: "It's not easy."

"She's not just this really smart, tough, accomplished person," said Kathy Sullivan, a longtime Clinton supporter. "She's actually warm. ... I wish I could bottle that up and give it to everyone outside of New Hampshire, because they don't get to see it like we do."

Sullivan said she's watched Hillary Clinton help hand out 500 diplomas at a high school commencement. She remembers the headband Clinton was wearing when they first met in 1992 — "a long time ago, a galaxy far, far away."

That distance may be Clinton's problem in adding a third chapter to the story.

Times change. Nearly one-third of potential New Hampshire voters were either not old enough to vote or lived in another state in 2008, according to an analysis by the University of New Hampshire's Carsey School of Public Policy.

Clinton allies can cite that statistic as they prepare themselves for the possibility of a disappointing end to the Clinton-New Hampshire story.

But Bill Clinton isn't going quietly. Campaigning for his wife in Milford on Sunday, he blasted Sanders' supporters for lodging "sexist" attacks and accused the senator of shifting positions on health care.

"The New Hampshire I knew would not have voted for me if I had done that," he said.