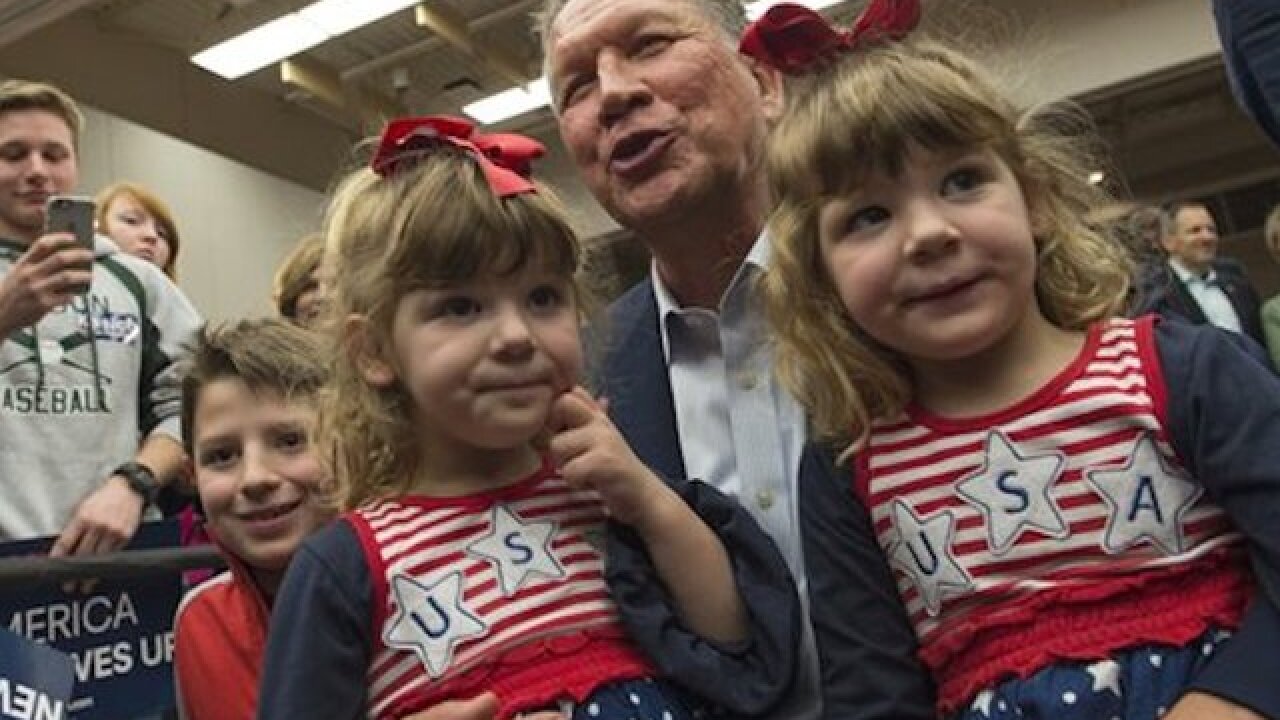 "There's something wrong with this guy," said Trump.

For his part, Cruz spent significant time Monday seeking to explain the ouster of his spokesman for tweeting a story that falsely accused White House hopeful Marco Rubio of insulting the Bible. And when the candidates weren't directing their fire at each other, they used scattered appearances on the eve of Tuesday's caucuses to assail Democratic candidate Hillary Clinton.

So raucous was this day that Trump stopped short at one point in his talk to bemoan the very delegate-selection he was in Nevada to tap.

Trump is still chafing from his lone loss in the GOP presidential selection sweepstakes, a narrow defeat at Cruz's hands in Iowa. He reiterated his calls for disqualifying Cruz because of "his fraudulent win in Iowa."

Cruz saved some rhetorical ammunition for Clinton, telling an audience in Elko, Nevada he likes the thought of her behind bars. One of his supporters had shouted that he should "put Hillary in jail" if he's elected in November. Cruz paused, and then responded: "With any luck, she'll be there already." Clinton has been trying to surmount a months-long controversy over her use of a private email server during her time as secretary of state.

Amid the fusillade of critical statements Monday, there was even an in your-face sort of moment involving someone attending the Trump event.

It was at the rally in Las Vegas where Trump, the billionaire real estate mogul, said he'd like to punch a protester in the face. He lamented the "old days" when he said the man would have been taken out of the event on a stretcher.

Rubio, who nosed out Cruz for second place in the South Carolina primary, was high on the Cruz's list of talking points — even if the Texan would have preferred otherwise. Addressing the firing of spokesman Rick Tyler, Cruz told reporters he had no choice but to dismiss his aide. "We are taking the high road," Cruz said.

Tyler did not return telephone, text or email messages left by The Associated Press seeking comment.

It's not the first time that Cruz's campaign has been accused by rivals of using questionable tactics. Cruz apologized to GOP hopeful Ben Carson earlier this month after his campaign promoted a news story suggesting that Carson was getting out of the race. Cruz's campaign has also acknowledged creating a website that used a computer program to create a fake picture of Rubio shaking hands with President Barack Obama.

Speaking during a campaign stop in Elko, Nevada, earlier Monday, Rubio criticized Cruz for the incident and asked whether Cruz would fire anyone involved.

"It's every single day something comes out of the Cruz campaign that's deceptive and untrue, and in this case goes after my faith," Rubio told reporters when asked about the incident.

Trump lashed out at Cruz over Twitter on Monday, saying that Cruz "has now apologized to Marco Rubio and Ben Carson for fraud and dirty tricks. No wonder he has lost Evangelical support!"

Meanwhile, establishment heavyweights continued to back Rubio, with many saying they see him as the candidate who can unite a disharmonious Republican Party. Arkansas Gov. Asa Hutchinson and Utah Sen. Orrin Hatch were the latest to endorse the Floridian. South Florida's three Cuban-American members of Congress also said that they shifted their support to Rubio, having previously backed Jeb Bush, who dropped out of the campaign following the South Carolina primary.

Democratic presidential hopefuls coming off a tight battle for Nevada, meantime, kicked off the week on opposite ends of the country. Clinton was fundraising in northern California, while Sen. Bernie Sanders held a rally in Massachusetts, another Super Tuesday state. South Carolina votes in the next Democratic primary on Saturday.

Sanders vowed to fight on despite his loss in Nevada, saying he has no plans of leaving the race anytime soon. He downplayed Clinton's weekend victory, pointing out that the win only resulted in her picking up four additional delegates, out of the 2,383 needed to win the nomination. He said his campaign has plenty of time to make up lost ground.

"This is about a slog, state by state by state," he said. "Even if we do well, Secretary Clinton will get a lot of delegates and we'll just have to keep moving on."