How Trump broke the rules of politics and won 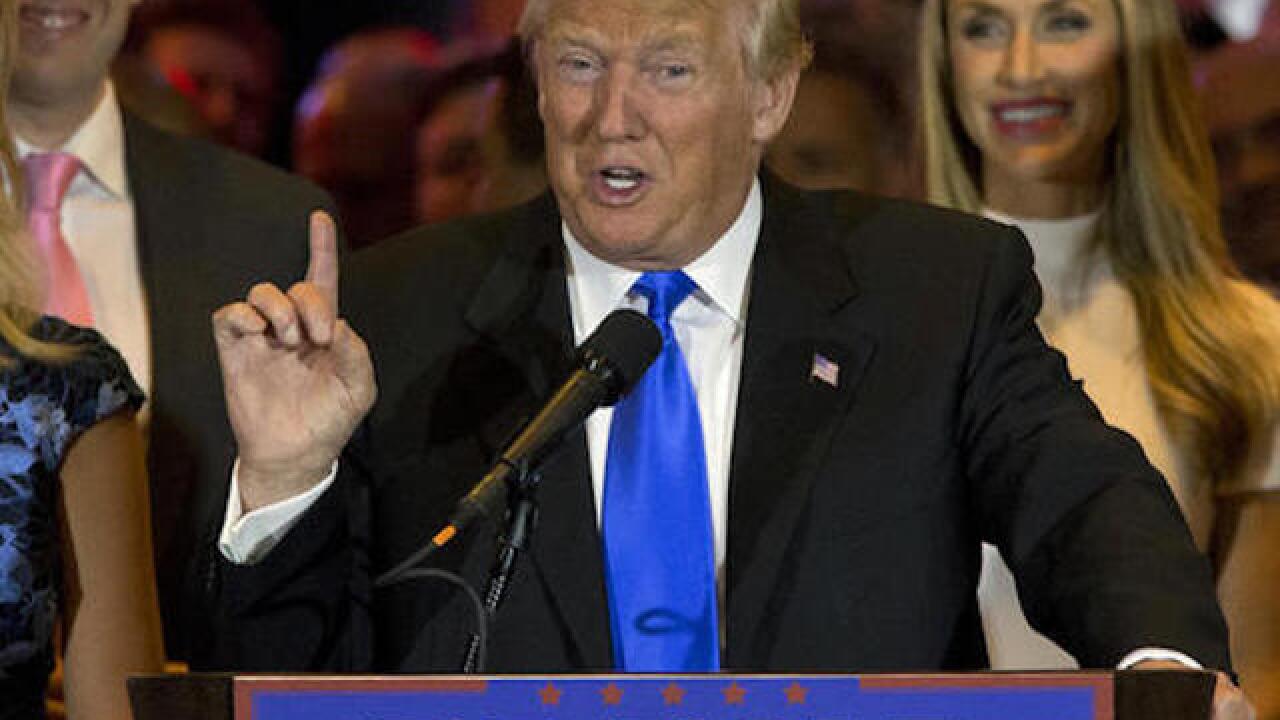 WASHINGTON (AP) — Polling? Who needs to do that? Fundraising? Can't be bothered. Parse your words? Fuhgetabout it.

Donald Trump took the rules of modern politics, trashed them and became the last man standing for the Republican nomination anyway.

It's what Trump's supporters love about him: He blurts out whatever pops into his head. He rejects "political correctness." He insults rivals and critics. He has fun. After one particularly salty salvo, Trump explained, "That's what I mean about being politically correct, every once in a while you can have a little fun, don't you think?" Plenty of candidates may think it, but Trump said it: "I'd like to punch him in the face," he said of one protester. To listen to a Trump speech from start to finish is to enter an alternate grammatical universe. Sentences veer off in unexpected directions as Trump has a new thought. When he interjects his trademark "by the way," there's no telling where he's headed next.

The billionaire is proud to campaign on the cheap, milking free media in a way that other candidates could only envy. He functioned through most of the primaries with a bare-bones staff. He had no national finance chairman — until Thursday. He never set up a traditional fundraising operation. Sure, he has "donate" buttons on his website, and raises millions hawking hats and other gear. But forget the chicken dinner circuit. Or charging donors $1,000 for a grip-and-grin photo. Or asking supporters to "bundle" contributions from friends and neighbors. Early on, Trump tweeted: "So, I have spent almost nothing on my run for president and am in 1st place. Jeb Bush has spent $59 million & done. Run country my way!"

The poll-obsessed candidate doesn't have a pollster. Other candidates spent hundreds of thousands of dollars on surveys to poll-test their words and messages, and track their standings in primary states. Trump goes with his gut and mines public polls for intel. He often tells crowds that he relies on his wife, Melania, to help him take the temperature of voters. "She's my pollster," he said, adding, "She's really smart."

Most candidates recoil from the dreaded "flip-flopper" label. Trump unabashedly changes his mind — not just week to week or day to day, but sometimes even within the same speech. He frames it as an asset. "I've never seen a successful person who wasn't flexible," Trump said at one GOP debate. "You have to be flexible, because you learn."

Candidates love to trot out five-point plans and lofty position papers — some more detailed than others. Trump, not so much. His outline for replacing Obamacare is more aspirational than detailed. His recent "America First" foreign policy speech was a broad-brush endeavor. Trump makes a virtue of leaving enemies guessing about U.S. intentions. "We have to be unpredictable, starting now," he says.

Trump salts his speeches with vulgarities — although he's dialed it back a bit after a scolding from Melania. Lots of politicians use profanities, of course, but typically not in public. Trump has publicly lip-synced the F-bomb, blurted out the S-word and hurled an offensive term at rival Ted Cruz. He fires a steady string of put-downs at other candidates whom he labels pathetic, liar, loser, nasty, evil and more. Oh, and not many candidates use the debate stage to refer to the size of their genitals.

It's become routine for candidates to rely on independent super PACs stocked with former aides and allies to play a strong supporting role for their campaigns, spending millions on political ads. Trump didn't go that route in the primary, and was proud to proclaim he didn't have a super PAC, although a few have sprung up to back him anyway. He said in his speech entering the race: "I don't need anybody's money. It's nice. ... I'm not using the lobbyists. I'm not using donors. I don't care. I'm really rich." Now that the general election race is under way, though, he's warming to the idea.

Remember how 2012 GOP nominee Mitt Romney was tarred by critics as a ruthless corporate fat cat? Trump has turned greed into a campaign asset. "My whole life I've been greedy, greedy, greedy," he said at a rally in Iowa. "I grabbed all the money I can get. I'm so greedy. But now I want to be greedy for the United States. I want to grab all that money. I'm going to be greedy for the United States."

Women. Hispanics. Muslims. Trump kept winning even as he rolled out a stream of remarks that could be a turn-off to huge swaths of the electorate. It started with his campaign-announcement speech, when he said illegal immigration from Mexico is bringing rapists, drugs and crime to the U.S. Then came his pledge to bar foreign Muslims from entering the country. Throughout his campaign, he's had harsh words for women and their appearances, mocking the looks of Carly Fiorina, retweeting an unflattering photo of Heidi Cruz and accusing Hillary Clinton of playing the "woman's card." Trump voters love that he "tells it like it is."

Trump isn't afraid to pick a fight, even with a conservative powerhouse like Fox News Channel. He refused to participate in a Fox-sponsored debate in January after Fox refused to remove Megyn Kelly as a moderator. He was irked that Kelly had asked him in a previous debate about statements that he had made about women. Trump isn't afraid to make up, though. He's agreed to an interview with Kelly later this month.

Trump keeps promising he'll act more "presidential' when the time is right. But, for now, he's having fun — and so are his supporters. "I can be presidential," he said at rally last month. "But if I was presidential, only about 20 percent of you would be here because it would be boring as hell."

Trump's distinctive hairstyle may be in for a makeover if he's elected president. "I would probably comb my hair back. Why? Because this thing is too hard to comb," he said at an appearance in Iowa last summer. "I wouldn't have time, because if I were in the White House, I'd be working my ass off."