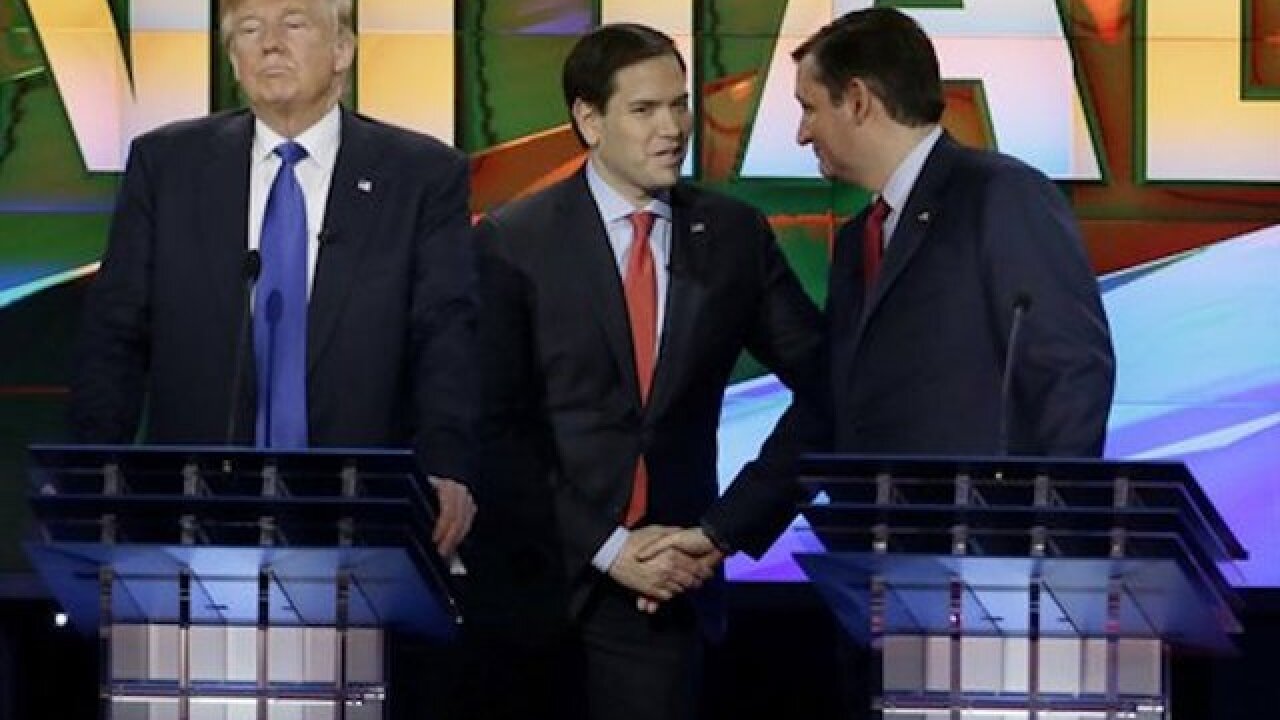 HOUSTON (AP) — Marco Rubio waged an all-out verbal assault on Donald Trump Friday morning as his allies prepared to spend millions on new attack ads in key states, promising an aggressive and well-funded takedown effort the morning after the Republican front-runner was knocked on his heels on the debate stage.

Rubio, the leading aggressor during the debate, picked up where he left off Friday morning. In several television interviews, he questioned Trump's business background, his ability to lead the nation, and repeatedly called the billionaire businessman a "con artist" who has spent decades "sticking it to the little guy."

"A con artist is about to take over the Republican Party and the conservative movement, and we have to put a stop to it," Rubio charged on CBS' "This Morning."

The comments come as the GOP presidential candidates barreled into the final stretch to Super Tuesday following after a name-calling, insult-trading, finger-pointing final debate in which Rubio and Ted Cruz engaged in a tag-team attack intended to slow Trump's momentum before it's too late.

"I've dealt with tougher," Trump sniffed after taking incoming for two-plus hours Thursday night. He said he knew the attacks were coming because "they're desperate. They're losing by massive amounts."

Eleven states vote in Tuesday's mega-round of voting, with 595 delegates at stake. Trump, with three straight victories behind him, has the momentum, and his rivals know they have to change that dynamic to have any hope of derailing his steamroll toward the nomination.

One of the ads charges that Trump "knows nothing about foreign policy." Another targets his business background, highlights the businessman's use of "sleazy bankruptcy laws to avoid paying workers" and highlights his recent comment that he loves "the poorly educated."

The ads are part of a "significant part of a multi-state, multi-million dollar buy," said the pro-Rubio group's spokesman, Jeff Sadosky.

It was far from clear, though, that the new effort will solve Trump's rivals' basic conundrum — each struggling to emerge as the clear alternative to the front-runner as non-Trump voters continue to splinter their support among the alternatives.

On the Democratic side, Hillary Clinton claimed new momentum on Friday on the eve of a South Carolina Democratic primary that she's expected to win handily.

"I think it does take me a little bit longer to get into the rhythm of campaigning," she said on MSNBC's "Morning Joe." ''We hit our stride in Nevada. Our message of breaking all barriers is really beginning to take hold. I really felt we were on an upward trajectory."

From Houston, the GOP candidates spread out in the hunt for Super Tuesday votes, with Cruz headed for Tennessee and Virginia on Friday. Both Trump and Rubio are signaling they're unwilling to cede Texas, the crown jewel of Super Tuesday, to the home state senator, Cruz. Each scheduled campaign events in Texas before heading to Oklahoma City.

Up until Thursday, Rubio and Cruz had shown little willingness to take on Trump when the national spotlight shines the brightest. That all changed in Houston.

Rubio was the principal aggressor, spitting out a steady stream of criticism on everything from Trump's position on immigration to his privileged background, his speaking style and more. Cruz was happy to pile on, too, questioning the front-runner's conservative credentials, foreign policy savvy and electability.

In one testy moment, Rubio speculated that if Trump "hadn't inherited $200 million, you know where Donald Trump would be right now? Selling watches in Manhattan."

Not long after that, he took on Trump's declaration that he'd build a wall on the Mexican border, declaring: "If he builds a wall the way he built Trump Tower he'll be using illegal immigrant labor to do it."

Joining in, Cruz criticized Trump for suggesting he alone had "discovered the issue of illegal immigration."

Both said Trump had had to pay a $1 million fine for illegal immigration hiring.

It was a rare night where the bombastic Trump, standing between the two senators, found himself on the defensive.

He was hardly silent, responding to both Rubio and Cruz: "This guy's a choke artist and this guy's a liar. ... Other than that I rest my case."