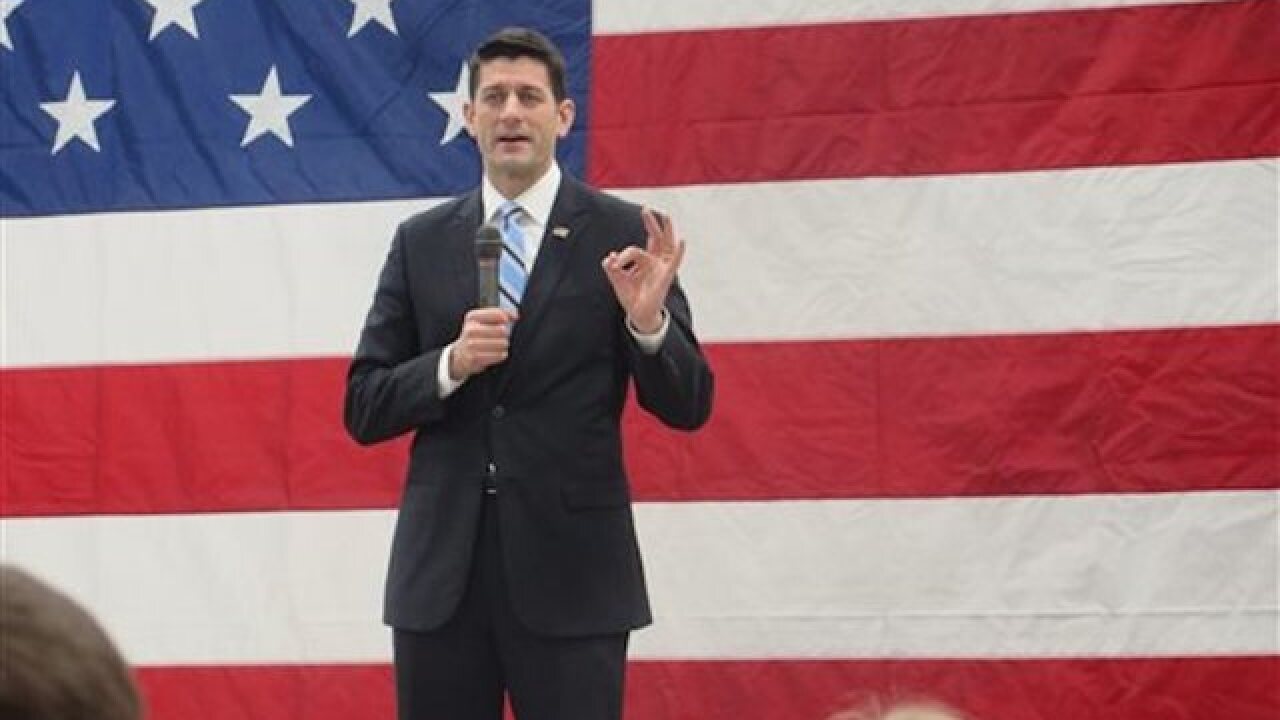 WASHINGTON (AP) — House Speaker Paul Ryan said Tuesday anyone who wants to be the Republican presidential nominee must reject any racist group or individual, a tacit swipe at GOP front-runner Donald Trump.

As voters in 11 states holding GOP contests headed to the polls on Super Tuesday, Ryan told reporters that the GOP is the party of President Abraham Lincoln and "this party does not prey on people's prejudices." At the same time, Ryan reiterated that he will support whoever the GOP nominates.

Ryan was apparently referring to Trump's appearance Sunday on CNN when he declined to disavow the support of former Ku Klux Klan leader David Duke and other white supremacists.

"When I see something that runs counter to who we are as a party and a country I will speak up. So today I want to be very clear about something: If a person wants to be the nominee of the Republican party there can be no evasion and no games. They must reject any group or cause that is built on bigotry," Ryan said.

But the episode provided fodder for candidates such as Sens. Marco Rubio, R-Fla., who said on Sunday that "not only is that wrong, it makes him unelectable."

Rubio quickly pounced on Trump's comments, saying the GOP "cannot be a party who refuses to condemn white supremacists and the Ku Klux Klan."

"Not only is that wrong, it makes him unelectable," Rubio told thousands of supporters gathered in Leesburg, Virginia. "How are we going to grow the party if we nominate someone who doesn't repudiate the Ku Klux Klan?"

"You're better than this," Cruz wrote on Twitter. "We should all agree, racism is wrong, KKK is abhorrent."

On Tuesday, USA Today reported that a group of about 30 African-American students from Valdosta State University were kicked out of a Trump rally by law enforcement officials.

"The only reason we were given was that Mr. Trump did not want us there," 22-year-old senior Brooke Gladney told the newspaper. The campaign denied any role in their ouster from the event.

Ryan bemoaned the current discourse in the GOP and said it was time to get back to focusing on how Republicans would solve the nation's problems.

"We are the party of Lincoln," Ryan added. "We believe all people are created in the eyes of God and our government. This is fundamental. And if someone wants to be our nominee they must understand this."

Ryan was the GOP vice presidential nominee in 2012. He said he has tried to avoid commenting on the presidential race but felt a need to speak up.

"I try to stay out of the day-to-day ups and downs of the primary," Ryan said. "But I've said when I see something that runs counter to who we are as a party and a country I will speak up."

Many Washington Republicans are increasingly open about their dismay at the prospect of Trump winning the GOP nomination. Sen. Jeff Flake, R-Ariz., an advocate of updating U.S. immigration law, said the prospect of voting for Trump is "not a pleasant thought at all .... I'm still holding out hope we don't have that choice."