Sanders plan to be more generous than Medicare 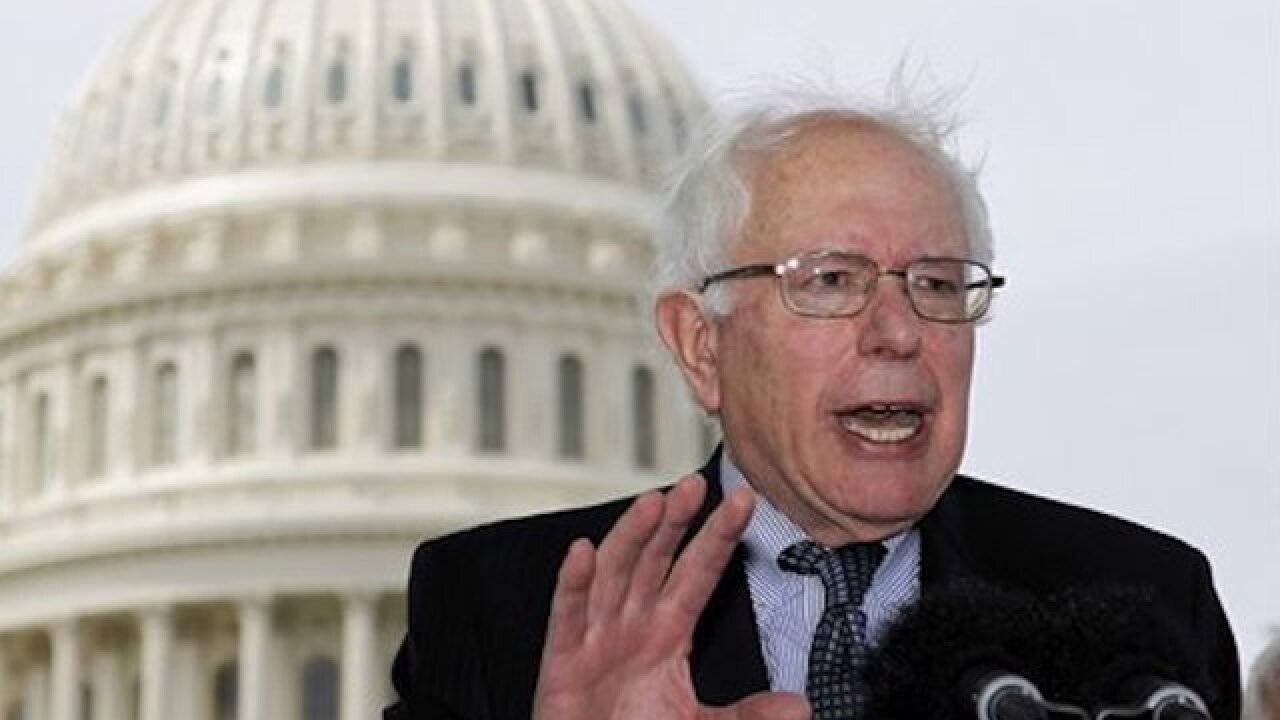 Copyright Associated Press
Alex Brandon
<p>In this May 10, 2011, file photo Sen. Bernie Sanders, I-Vt., gestures during a news conference on Capitol Hill in Washington to discuss single-payer health care bills in the Senate and House. In In 2016 Democratic presidential candidate Sanders says his plan for a government-run health care system from cradle to grave is like Medicare for all. But with full coverage for long-term care, most dental care included, no deductibles and zero copays, the Sanders plan is considerably more generous. Think of it as Medicare on growth hormones. (AP Photo/Alex Brandon, File)</p>

WASHINGTON (AP) — Democratic presidential candidate Bernie Sanders says his plan for a government-run health care system from cradle to grave is like Medicare for all.

But with full coverage for long-term care, most dental care included, no deductibles and zero copays, the Sanders plan is considerably more generous. Think of it as Medicare on growth hormones.

Setting aside ideological issues, the scope of Sanders' plan and its lack of detail have raised questions about its seriousness. Some health care experts see it mainly as a political document to distinguish Sanders' revolutionary ideas from Hillary Clinton's incremental approach.

Sanders runs the risk of looking "like he is living in a fantasy land, for putting forward an idea he can't possibly deliver during his term in office," said Drew Altman, president of the nonpartisan Kaiser Family Foundation.

Last Sunday, the Vermont senator released an 8-page outline of his "Medicare For All" plan, an idea he's long advocated. The campaign estimates it would cost $1.38 trillion a year, paid for with new taxes that would take the place of private health insurance premiums. Here's a look at some things Sanders left out:

Medicare doesn't cover long-term care, not to mention dentures, and seniors face deductibles and cost-sharing when they go to the doctor. Many buy an additional private insurance policy to cover Medicare gaps. "BernieCare," as it is being called, would be above and beyond.

"It's not Medicare for all," said Republican economist Gail Wilensky, who ran Medicare under former President George H.W. Bush. "It's nonsense to talk about it as if it were. You're just giving people a comfort level that's inappropriate."

Even if there are important differences with Medicare, supporters of Sanders' plan say it's similar in the sense that virtually all seniors are covered under that program. Sanders' approach is also called 'single-payer,' because the government would become the steward of the health care system, currently about one-sixth of the economy.

Sanders says his plan will cost $6 trillion less over 10 years than the current health care system. But his path to savings is unclear.

For starters, a government takeover of health care financing would eliminate all the useful signals about value that private payers generate. A few years ago, it became obvious Medicare had a problem paying for home medical equipment when government officials could find the same items on the Internet for much less.

"How do you learn about the value of things if you don't have an accompanying private sector?" asked economist Paul Hughes-Cromwick of the Altarum Institute, a Michigan-based nonprofit that does research and consulting. "All of a sudden you wouldn't have an empirical basis on which to build."

Altman, the Kaiser foundation president, said it's possible a single-payer system could produce substantial savings, for example by eliminating administrative duplication among insurers.

"I can't say how big those savings would be from the Sanders plan because all we have is a sketchy outline," he added. Any significant savings would have to come from reductions in payments to hospitals and doctors, not discussed in the campaign outline.

TEST A LITTLE, BUILD A LITTLE?

Back in 2013, the Obama administration famously promised that the president's health care plan would launch on the same day in all 50 states. But when they flipped the switch, the HealthCare.gov website didn't work. Sanders' plan makes no mention of a phase-in, meaning the government would have to get everything right the first time.

The head of one of the nation's largest hospital groups said a test of some kind would seem prudent.

"If the nation wanted to experiment, we would be willing to look at the details and consider being supportive — but the details are huge," said Sister Carol Keehan, CEO of the Catholic Health Association.

As nonprofits, Catholic hospitals are not locked into any particular payment model, Keehan explained. The U.S. could do better. "There is no question a lot of money in the delivery system is poorly spent," she said.

Sanders' own state had wanted to implement a single-payer under the umbrella of flexibility encouraged by President Barack Obama's health care law. But Vermont pulled back after the magnitude of expected tax increases became clear.

"Bernie may have a bigger job on his hands than he understands, trying to get people to just take a look at this," Keehan said.

Most economically advanced countries with government-run health care set up their systems long ago, but Taiwan's National Health Insurance is newer, recently celebrating its 20th anniversary.

Princeton University researcher Tsung-Mei Cheng said there are lessons from Taiwan for any country contemplating the move.

Taiwan's system has been very popular with the public, but the government had to expand the tax base to keep pace with costs. The system does have copays, although they are affordable for most middle-class households. Doctors' use of costly technologies such as MRIs is closely monitored. And it can take three to five years after expensive new drugs are introduced elsewhere for them to become widely available in Taiwan.

For single-payer to gain acceptance here, Cheng said Americans would have to change their mindset.