Trump campaigns with Palin nod, but no Palin 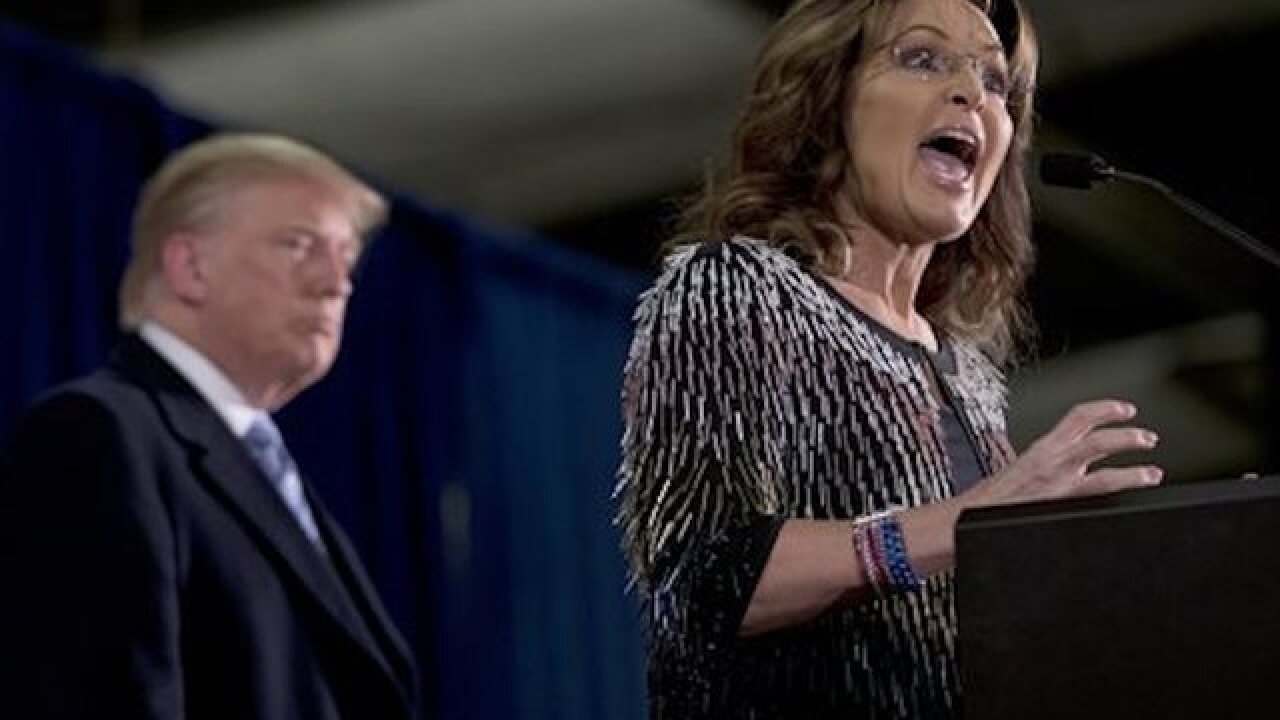 "We had a big day yesterday. Yesterday was amazing in every way," Trump told supporters in Norwalk, Iowa, as he kicked off another day of campaigning with less than two weeks to go before Iowa's kick-off caucuses. "Sarah came along and she said we love what's happening. It's a movement."

But Palin, who was expected to campaign alongside her new political ally Wednesday, was a no-show at the Iowa rally. A campaign spokeswoman did not immediately respond to questions about why she was not in attendance, but said that she would appearing at a rally later in the day in Tulsa, Oklahoma.

Palin, the former governor of Alaska and 2008 GOP vice presidential nominee, erupted onto the stage in Ames, Iowa, Tuesday, announcing her support for Trump and echoing his campaign's mantra that it's time to "Make America Great Again."

"No more pussy-footing around," Palin told a fired-up crowd.

The endorsement comes as Trump is locked in a dead heat with Cruz in Iowa. The two have been ramping up their attacks against one another as the Feb. 1 caucuses have neared.

In the statement announcing the endorsement, Trump's campaign described Palin as a conservative who "helped launch the careers of several key future leaders of the Republican Party and conservative movement." The statement also quoted Cruz as once saying he "would not be in the United States Senate were it not for Gov. Sarah Palin. ... She can pick winners."

Campaigning in New Hampshire, Cruz said, "Regardless of what Sarah intends to do in 2016, I will remain a big, big fan of Sarah Palin."

Palin endorsed Cruz in his 2012 Senate race and said as recently as last month that he and Trump were both in her top tier of candidates, making the endorsement a symbolic blow to Cruz.

"I think it throws a pie into Sen. Cruz's face," said Trump supporter Tim Oelschlager, 56, who was at Wednesday's event in Norwalk. "It's kind of like somebody barbequing in your backyard, setting up a tent in your backyard."

Earlier Tuesday, Cruz faced another blow to his efforts in Iowa, after the state's Republican Gov. Terry Branstad said at a renewable fuels conference near Des Moines that Iowans should reject Cruz because he supports phasing out the fuel standard. Asked if he wants to see Cruz defeated in Iowa, Branstad responded: "Yes."

Palin's endorsement speech combined the folksy charm and everywoman appeal that initially made her a GOP superstar with defiant taunting of a "busted" GOP establishment that she slammed for counting both Trump and herself out.

Palin offered her full-throated support for Trump and slammed President Barack Obama as the "capitulator in chief." Trump, she said, would be a commander in chief who would "let our warriors do their job and go kick ISIS' ass!"

She also took aim at the Republican establishment for "attacking their own front-runner" and offered a challenge to those who have suggested that Trump, whose positions on issues like gun control and abortion rights have shifted over the years, isn't conservative enough.

"Oh my goodness gracious. What the heck would the establishment know about conservativism?" she said. "Who are they to tell us that we're not conservative enough? ... Give me a break."

Trump, whose team had been touting a major, surprise announcement, praised Palin as "a friend, and a high-quality person whom I have great respect for" in a statement.

"We're going to give' em hell," he said after her speech.

Palin was a virtual newcomer to the national political arena when 2008 GOP presidential nominee John McCain named her as his running mate. She has since risen to prominence as one of the most outspoken conservatives in the party. She signed on as a Fox News commentator after resigning as Alaska's governor in 2010, a job she held until last year.

Trump and Palin did not discuss how the endorsement had come about, but Trump's national political director, Michael Glassner, previously worked for her. Trump said earlier Tuesday that he doesn't typically put much stock in endorsements, but said of this one, "I think it could very well result in votes."

"I think it helps Trump overwhelm the news cycle with Trump coverage at a critical time," he said.

Madden also said Palin's support could help shield Trump from charges that his past positions make him too liberal to be the GOP nominee, "giving Trump some rhetorical cover from a conservative validator in the eyes of many grassroots conservatives."

Palin has been expected to attend Trump's morning rally. His campaign had said she would "travel with the candidate to both events on Wednesday" and a message to supporters had touted "a very special guest" would be appearing.

Palin's oldest son, Track, was arrested earlier this week in a domestic violence case in which his girlfriend told police she was afraid he would shoot himself with a rifle. Track Palin was charged with assault, interfering with the report of a domestic violence crime and possessing a weapon while intoxicated in connection with the incident.