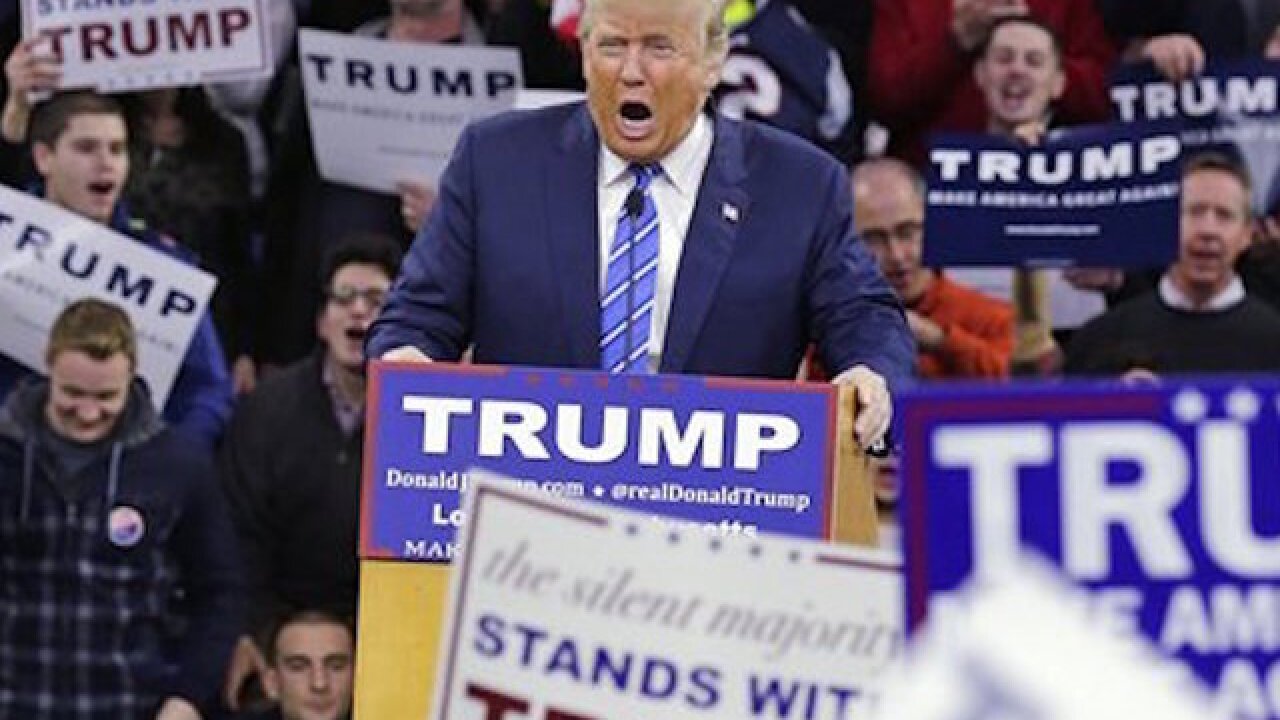 MANCHESTER, N.H. (AP) — Republican presidential hopeful Donald Trump is giving some of the most divisive proposals of his campaign a starring role in his first television ad — although the billionaire developer faced questions about the footage he chose to illustrate his arguments.

With the opening 2016 primary contest four weeks away, Trump is spotlighting his plan to ban Muslims from entering the United States — temporarily and with exceptions, he says — and to build a wall along the southern border. Trump's campaign says he plans to spend $2 million a week on the ad, set to begin airing Tuesday across Iowa and New Hampshire.

The new ad features dark images of the San Bernardino shooters, who were Muslims, as well as body bags and explosions.

"The politicians can pretend it's something else. But Donald Trump calls it radical Islamic terrorism. That's why he's calling for a temporary shutdown of Muslims entering the United States until we can figure out what's going on," a narrator says.

Video footage later in the ad shows people apparently streaming freely across a border as a narrator says Trump will "stop illegal immigrants by building a wall on our southern border that Mexico will pay for."

Facing questions from news outlets, the Trump campaign acknowledged in a statement Monday that the border images were of a Spanish enclave in Morocco, not the U.S.-Mexican border.

"I think it's irrelevant," Trump said in an interview on Fox News Channel's "The O'Reilly Factor" Monday night. "So you can just take it any way you want, but it's really merely a display of what a dumping ground is going to look like. And that's what our country's becoming very rapidly."

His campaign elaborated in a statement, saying the selection of footage was intended "to demonstrate the severe impact of an open border and the very real threat Americans face if we do not immediately build a wall and stop illegal immigration."

The ad, posted on Trump's website Monday, is a departure from the typical introductory campaign spot, which typically introduces a candidate to voters. But Trump already is well-known.

"We're not the typical campaign," Trump campaign manager Corey Lewandowski said of the ad. Instead, he said, Trump chose to focus on the issue that has been the centerpiece of his campaign: illegal immigration.

"These are the issues that Mr. Trump has brought to the forefront of the discussion," said Lewandowski. "He's talked about this from the day he launched his campaign."

Trump's proposal on Muslims has been condemned by Republicans and Democrats as un-American and counterproductive, yet the hard-line approach to immigration has fueled his popularity among the overwhelmingly white GOP primary electorate.

Republican pollster Frank Luntz, at times a Trump critic, predicted the new ad would help Trump among the slice of Republican voters who participate in early voting contests.

An ABC News/Washington Post poll conducted in December found that 6 in 10 Americans think a ban on Muslims entering the United States is the wrong thing to do. Among only Republicans, however, 6 in 10 say they would support such a policy.

The ad represents the billionaire businessman's first foray into television advertising after spending much of 2015 dominating polls without spending significant resources — at least compared to his rivals.

On Monday, the campaign put almost $2 million into broadcast and cable television ads to run this week in Iowa and New Hampshire, advertising tracker Kantar Media's CMAG shows. He had previously spent about $300,000 on radio commercials, mostly in Iowa, over three weeks in November.

While Trump had previously said he was worried about oversaturating the airwaves, he said Monday he doesn't "want to take any chances."