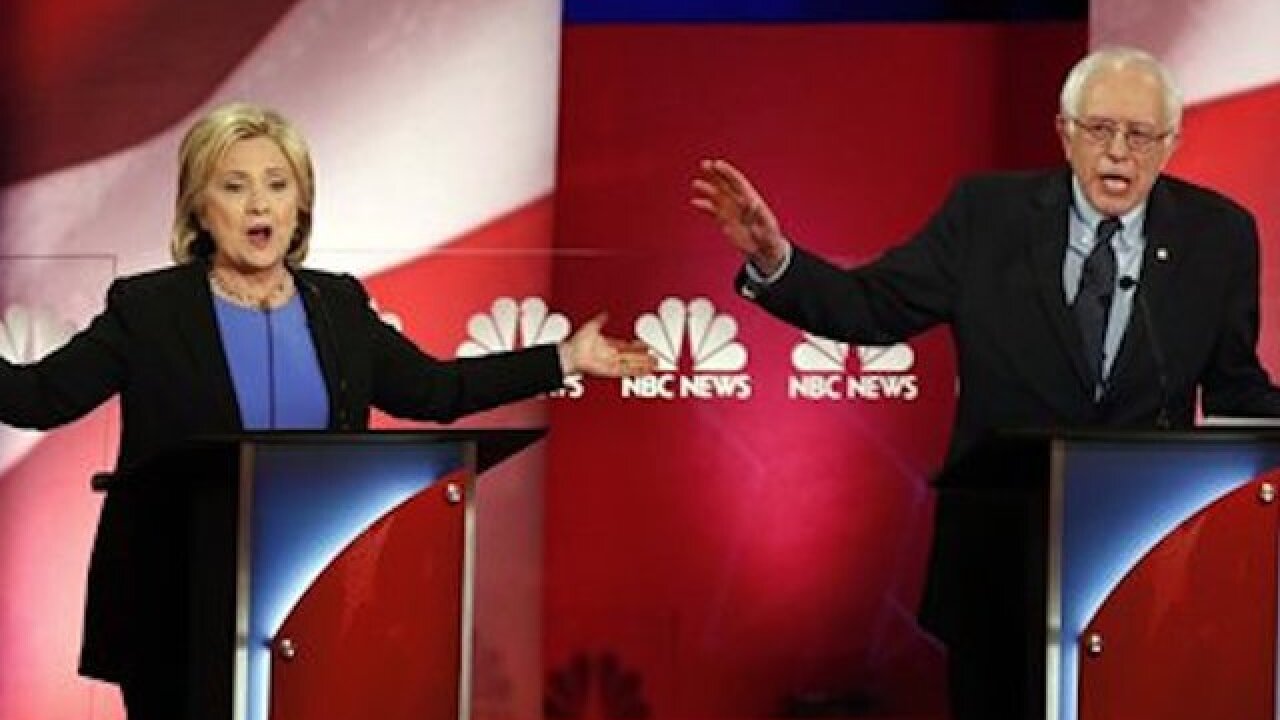 WASHINGTON (AP) — The face-to-face meeting between Hillary Clinton and Bernie Sanders is rooted in an intensifying debate over who understands the great divide between rich Americans and everyone else.

The theme has long been key to the contest between Democrats, but with Martin O'Malley's exit from the race this week, that contest is focused and dagger-sharp, and it's rooted in the emotional question of which candidate would represent cash-strapped, everyday Americans. But the real battle is for the votes of liberal Democrats who will decide whether Sanders or Clinton becomes the party's 2016 presidential nominee.

The intensity is fed by the context: The debate Thursday night comes after Clinton scored a gossamer-thin victory in the Iowa caucuses. But a win is a win, and she wants it to stay that way through the New Hampshire contest Tuesday and beyond.

Sanders, though, is the heavy favorite on his home turf in New England and not willing to let the former secretary of state chalk up a victory in New Hampshire as she did in 2008.

Things to watch at the University of New Hampshire, which will be on MSNBC:

WHO'S A REAL PROGRESSIVE?

Watch for Clinton and Sanders to take off running on this topic, which intensified over Twitter and in live appearances after Monday's Iowa caucuses.

Clinton claims she's a "progressive who wants to make progress," a dig at what she suggests are Sanders' pie-in-the-sky ideas.

Sanders, a socialist, scoffs at that as the height of hypocrisy. Most progressives he knows, he tweeted, did not support the Iraq war, while Clinton voted for it as a senator. And he's lately been going after her for supporting President Barack Obama's Trans-Pacific Partnership trade deal. Earlier this week, he said she's perhaps progressive on "some days."

Clinton shot back from the campaign stage that the charge was a "low blow," saying she's been "fighting the progressive fight" for years, including her drive to expand children's health insurance.

Sanders sniped over Twitter on Wednesday: "Most progressives that I know don't raise millions of dollars from Wall Street" as Clinton, a former senator from New York, has done.

Look for Clinton on the defensive over cash payments she's received for speaking engagements. She struggled with a question Wednesday about why she accepted $675,000 for three speeches from Goldman Sachs. "Well, I don't know. That's what they offered." She then said she hadn't yet committed to running for president, suggesting that at the time, accepting that much was politically okay. The point, though, is whether she's vulnerable to being influenced by big-money interests who have compensated her so handsomely. Clinton later said her record shows that her public policy decisions haven't been influenced by outside interests on public policy. The question also highlights her wealth in a race in which the candidates claim to understand Americans who struggle to pay bills.

Clinton acknowledged after Iowa that she has "some work" ahead to appeal to young and first-time voters whom Sanders has been able to rally. Look for her to highlight her plans to make college more affordable, help small businesses and improve Obama's health care law.

Clinton finds herself on even shakier ground in New Hampshire against Sanders' home-field advantage, and her campaign has cast her as an underdog against the Vermont senator.

"I know that they tend to favor their neighbors," she said on CNN's "Situation Room" this week. "That's the pattern, the history of the primary. And Sen. Sanders is a neighbor."

In 2008, Clinton won the New Hampshire primary even though the neighboring Massachusetts senator and Democratic patriarch, Ted Kennedy, had endorsed Obama.

This is a nationally televised debate, so Clinton and Sanders will be talking not just to New Hampshire voters, but to Democrats in coming primaries among more diverse electorates.

After New Hampshire, the next-up primaries in Nevada and South Carolina are tests for how well Sanders can perform among Latinos, who are a strong presence in Nevada, and African-Americans, who make up a majority of South Carolina's Democratic electorate. In contrast, Iowa and New Hampshire are both overwhelmingly white and allow Sanders to capitalize on his strengths among urban white liberals and people on college campuses.

Listen for Clinton's heavy emphasis on Obama's health law, which she says she wants to build on while Sanders would switch to a government-paid health system. She's also likely to hammer Sanders on his mixed record on gun control.