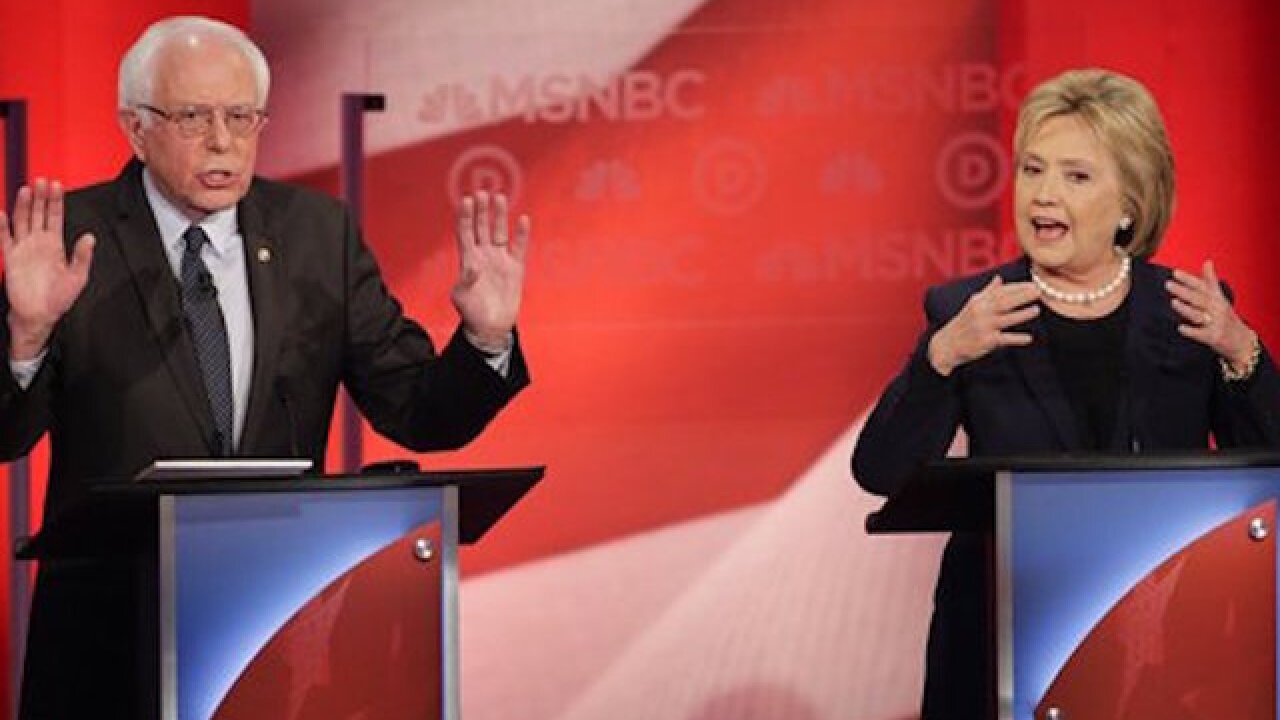 DURHAM, N.H. (AP) — Their race ever more contentious, Hillary Clinton and Bernie Sanders tangled in their first one-on-one debate Thursday night over how to achieve liberal goals such as health care for all and a better education system.

Clinton dismissed Sanders' proposals as "just not achievable," while Sanders countered that Clinton was willing to settle for less than Americans deserve.

"I do not accept the belief that the United States of America can't do that," Sanders said of his plan for universal health care and of his efforts to take on "the rip-offs of the pharmaceutical industry."

Clinton insisted they both want the same thing, "the disagreement is where do we start from and where do we end up."

The race for the Democratic nomination, once seen as a sure thing for Clinton, intensified this week after Sanders held the former secretary of state to a whisper-thin margin of victory in Iowa's leadoff caucuses. The tone of their back-and-forth has become increasingly sharp, and the candidates agreed to add four more debates to the primary season schedule, including Thursday's faceoff in Durham.

The debate is the last before Tuesday's first-in-the-nation New Hampshire primary, and Sanders holds a big lead in polls in the state.

In fresh evidence of the tightening race, Clinton reported that her campaign had raised $15 million in January — $5 million less than Sanders and the first time she's been outraised by her opponent. Her finance director called the numbers "a very loud wake-up call" in a fundraising email to supporters.

Heading into the debate, Sanders was eager to lower expectations for his finish in New Hampshire, casting himself as an underdog against "the most powerful political organization in the country."

Clinton, for her part, signaled her determination to at least narrow the gap before Tuesday's vote in the state where she defeated Barack Obama in 2008 before ultimately losing the nomination to him. Her prospects are much stronger in primaries and caucuses after New Hampshire, as the race moves on to states with more diverse electorates that are to her advantage.

The two campaigns have even skirmished this week over why Sanders is doing so well in New Hampshire polls. His campaign accused Clinton's of insulting New Hampshire voters by suggesting they only support the Vermont senator because he's from a neighboring state. That was after Clinton's campaign manager referred to New Hampshire as Sanders' "backyard."

Clinton's campaign also criticized Sanders' camp for what it said were misleading ads that suggest the senator received the endorsement of two newspapers that have not backed his bid for the White House. Sanders countered that the ads didn't say he'd been endorsed but merely passed along "nice" words the newspapers had written about him.

On a broader issue, Clinton offers herself to voters as "a progressive who gets things done," part of her pitch that she's the one with the practical skills to implement a progressive agenda.

Sanders' counter-argument is that it will take a "political revolution" to achieve goals such as universal health care, a fairer tax system and an incorruptible campaign finance system.

Asked this week if Clinton is a progressive, he said: "Some days, yes. Except when she announces that she is a proud moderate. Then I guess she is not a progressive."

Sanders added that it is hard to take on the establishment "when you become as dependent as she has through her super PAC and in other ways on Wall Street or drug company money."

The Durham debate will be the first faceoff for Clinton and Sanders since former Maryland Gov. Martin O'Malley dropped out of the race after a poor showing in Iowa.

Clinton's razor-thin win in Iowa was the latest twist in an election campaign that, until recently, had been dominated by the crowded and cacophonous field of Republicans, who spread out across New Hampshire this week.

Donald Trump, who finished second in Iowa, stepped up the pace of his campaign and acknowledged he should have had a stronger ground operation in Iowa. Jeb Bush, his campaign lagging, brought in his mom, former first lady Barbara Bush, who praised him as "decent and honest and everything we need in a president."