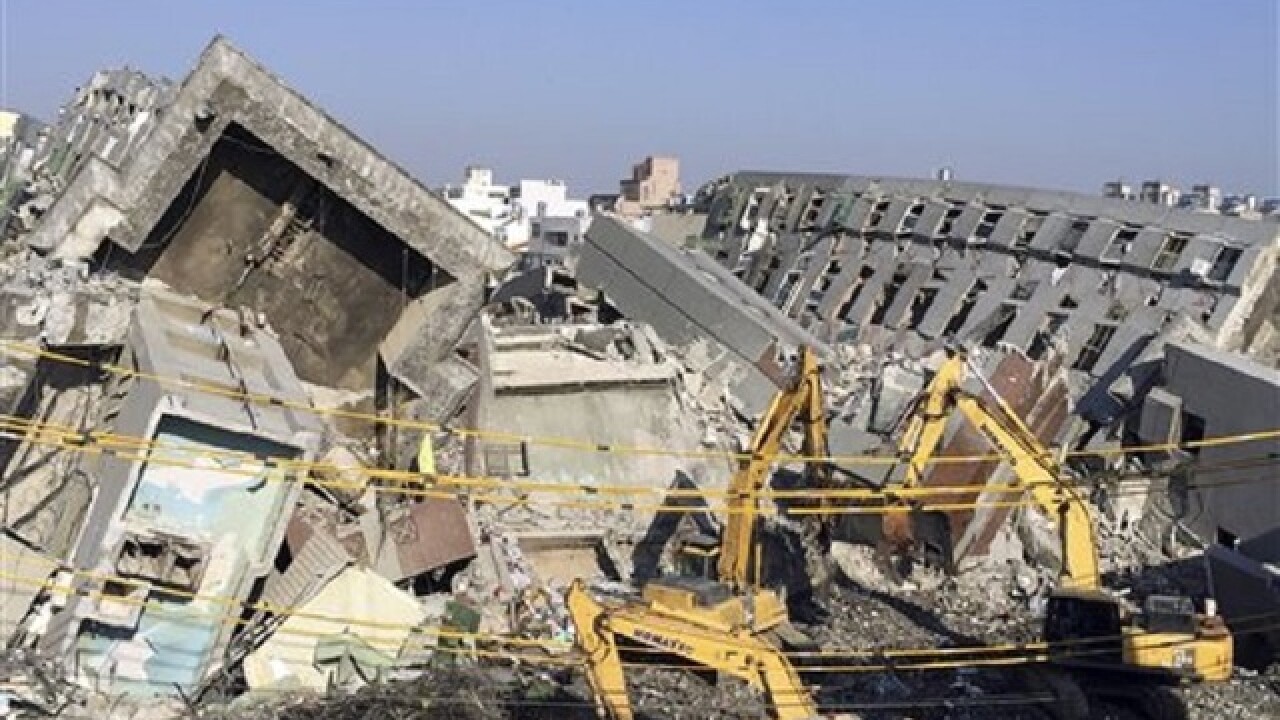 TAINAN, Taiwan (AP) — Three Taiwanese construction company executives have been detained on charges of professional negligence resulting in death following the collapse of an apartment building that killed dozens.
The district prosecutor's office in the city of Tainan said in a statement Wednesday that Lin Ming-hui and architects Chang Kui-an and Cheng Chin-kui were suspected of having overseen shoddy construction of the 17-story Weiguan Golden Dragon building, which crashed onto its side following an earthquake Saturday.
The statement said the three were detained to prevent collusion or other acts that could disrupt the investigation. Among the accusations was that only half as many fasteners had been used in the supporting columns as required.
The death toll in the 6.4 magnitude quake stood at 44 on Wednesday, with all but two of the deaths coming in the building collapse. About 100 people are believed to still be trapped in the debris.
The broadcaster FTV and other Taiwanese media said Lin had changed his name after a previous bankruptcy and had run multiple property development companies in Tainan an apparent attempt to avoid creditors and bilked clients.
Although the shallow quake was potentially devastating, few buildings were damaged as a result of strict construction standards in force in Taiwan, an island frequently struck by quakes. The Weiguan Golden Dragon building, built in 1989, was the only major structure to collapse in the temblor.
Most of the 320 people who were rescued from the disaster were saved in the hours immediately after the quake, in which the building's foundation and lower floors gave way before it toppled onto its side.
Earthquakes rattle Taiwan frequently. Most are minor and cause little or no damage, though a magnitude 7.6 quake in central Taiwan in 1999 killed more than 2,300 people. More stringent building standards were introduced following that disaster and appear to have been tightly enforced.
The quake struck during the most important family holiday in the Chinese calendar — the Lunar New Year.
The extended Lunar New Year holiday — the most important family holiday in the Chinese calendar — officially started Monday, but celebrations in Taiwan have been subdued.
Associated Press 2016