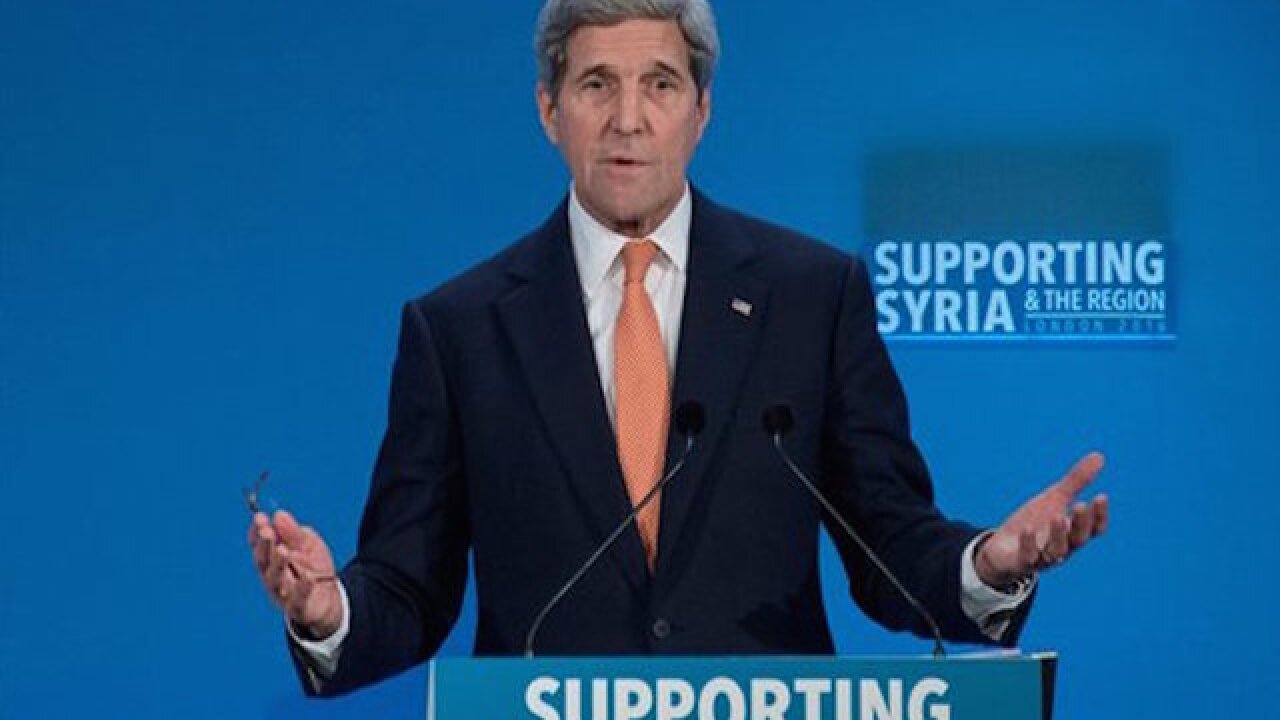 Nicholas Kamm
<p>FILE - In this Feb. 4, 2016 file-pool photo, Secretary of State John Kerry at a conference entitled 'Supporting Syria & The Region,' in London. As Kerry heads to Munich, Wednesday, Feb. 10, 2016, in search of compromises that could yield a truce and revive peace talks that were suspended before they really started, the administration is being pressed by all sides to clarify its strategy. (Nicholas Kamm/Pool Photo via AP, File)</p>

MUNICH (AP) — Diplomats agreed Friday to work toward a temporary "cessation of hostilities" in Syria's civil war within a week, although efforts to secure a lasting cease-fire fell short.

The deal appeared to be the result of a compromise between the United States, which had wanted an immediate cease-fire, and Russia, which had proposed one to start on March 1.

Although foreign ministers from the International Syria Support Group managed to seal an agreement to "accelerate and expand" deliveries of humanitarian aid to besieged Syrian communities beginning this week, their failure to agree on a cease-fire leaves the most critical step to resuming peace talks unresolved. It was not clear from their comments afterward if deep differences regarding the truce and which groups would be eligible for it could be overcome.

Speaking for the group, U.S. Secretary of State John Kerry hailed the results as a significant accomplishment but noted that a cessation-of-hostilities agreement, if it can be achieved, would only be a "pause" in fighting and that more work would need to be done to turn it into a fully-fledged cease-fire.

He also allowed that the agreements made were "commitments on paper" only.

"The real test is whether or not all the parties honor those commitments and implement them," he told reporters after the nearly six-hour meeting at a Munich hotel, which ran into the early hours of Friday.

Dramatizing the high-stakes nature of the Munich talks was Russian Prime Minister Dmitry Medvedev's statement that a full-scale ground operation in Syria could widen the conflict.

"A ground operation draws everyone taking part in it into a war," Medvedev was quoted as saying in an interview published by the German newspaper Handelsblatt.

When asked about a recent proposal from Saudi Arabia to send in ground troops to Syria, the prime minister answered that "the Americans and our Arab partners must consider whether or not they want a permanent war."

Medvedev criticized Western powers' refusal to collaborate with Russia in Syria. The prime minister said ties at the level of defense departments are only sporadic.

Meanwhile, humanitarian access to the battle-scarred country was to be discussed by a working group on Friday in Geneva. It is key to relieving the suffering of millions of Syrians in the short term, a durable and lasting cease-fire will be required if stalled negotiations between Syrian President Bashar Assad's government and the opposition are to resume on or before a U.N.-set target date of Feb. 25. The talks broke down last month before they really started, due largely to gains by Assad's military with the heavy backing of Russian airstrikes.

Kerry and Russian Foreign Minister Sergey Lavrov said the U.S. and Russia would co-chair both the working group on humanitarian aid as well as a task force that will try to deal with the "modalities" of the temporary truce. That task force will include members of the military along with representatives from countries that are supporting various armed groups in Syria. The Syrian government and the opposition would both have to agree to the details.

Russia had proposed the March 1 cease-fire date, which the U.S. and others saw as a ploy to give Moscow and the Syrian army three more weeks to try to crush Western- and Arab-backed rebels. The U.S. countered with demands for an immediate stop to the fighting.

Despite apparent concessions on potential timing of the truce and the agreement to set up the task force, the U.S., Russia and others remain far apart on which groups should be eligible for it. The new task force will take up a job that was supposed to have been settled months ago. At the moment, only two groups — the Islamic State and the al-Qaida-affiliated al-Nusra Front — are ineligible because they are identified as terrorist organizations by the United Nations.

Russia, Syria and Iran argue that other groups, notably some supported by Turkey, Saudi Arabia and other Arab states, should not be eligible for the cease-fire, and there was no sign Friday that those differences had been resolved.

Lavrov said the Russian air campaign in support of Assad's military would continue against terrorist groups and denied persistent reports that the Russian strikes have hit civilian areas, notably around rebel-held Aleppo, where heavy fighting has been raging for the past week.

Asked Friday to comment on the Munich talks, Salem Meslet, the spokesman for the Syrian opposition coalition known as the High Negotiations Commitee, said, "We must see action on the ground in Syria."

Five years of conflict have killed more than a quarter-million people, created Europe's biggest refugee crisis since World War II and allowed the Islamic State to carve out its own territory across parts of Syria and neighboring Iraq.