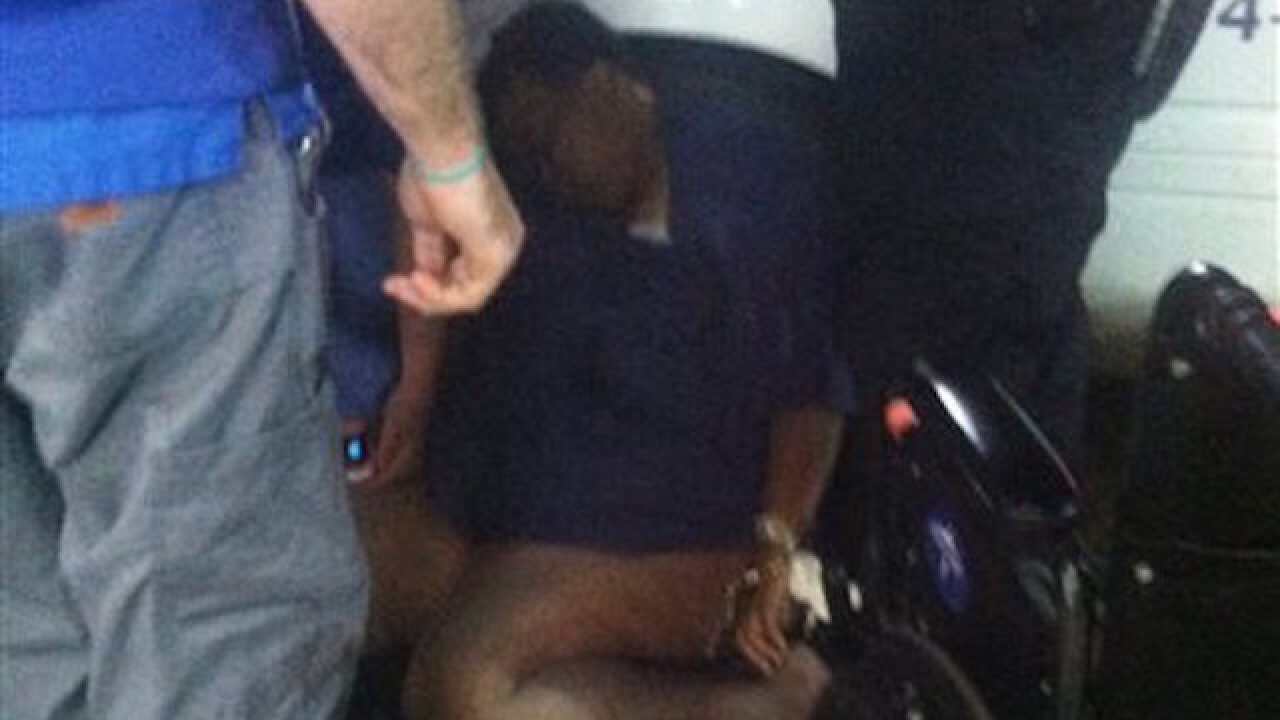 <p>In this Monday, Dec. 21, 2015 photo provided by the family of Barbara Dawson, Dawson lies on the ground after collapsing on the floor in Blountstown, Fla. Dawson collapsed while being escorted in handcuffs from the hospital, where she sought treatment for breathing difficulties, Blountstown Police Chief Mark Mallory said. She was arrested for disorderly conduct and trespassing when she refused multiple requests to leave, Mallory said. (Courtesy of the family of Barbara Dawson via AP)</p>

A Florida police officer tried to put a woman into a patrol car after she collapsed at a hospital, believing that she was "making herself dead weight" to avoid going to jail, according to a police report released Monday.

Dawson was initially brought to the hospital on Dec. 21 by ambulance after complaining of abdominal pain. She was treated, but became unruly when she was discharged because she didn't think she was OK to be released.

After refusing multiple requests to leave, she was arrested for disorderly conduct and trespassing, police said. Officer John Tadlock said he attempted to remove Dawson's oxygen hose but she refused to let him to take it. The officer was eventually able to get it out and handcuffed Dawson, with the help of a paramedic, according to the report.

Tadlock said he had to push Dawson from behind to get her to go to the police car and she complained of difficulty breathing.

"Dawson also complained of not being able to breathe but she appeared to be breathing fine as she was talking. Medical staff was also present and did not seem to think Dawson was having trouble breathing," Tadlock said in the report.

Dawson fell to the ground 1 to 2 feet from the patrol car while Tadlock reached for his keys. She cut her feet and knees.

"It was believed by myself that Dawson was just being noncompliant and making herself dead weight in an effort to avoid going to jail," the officer said.

"Myself and medical staff made several attempts to place Dawson in my patrol car to no avail. I continued to ask Dawson to comply with my request and get in the car but Dawson continued to be unresponsive to any commands or request," Tadlock said.

He said a nurse checked her vital signs and they were OK, but a doctor later came out and said Dawson was being readmitted "for symptoms totally different than what she had been released from earlier," according to the report.

The medical examiner's office found that Dawson died from a blood clot due to being excessively overweight.

Ruth Attaway, the CEO of Liberty-Calhoun Hospital, said last week that the blood clot in the lungs that Dawson died of is often "difficult to detect and can be impossible to treat."

Dawson's death comes amid increased scrutiny of police treatment of blacks. Dawson was black and the officer who arrested her is white.

There is no hospital video of the incident because a server was down for upgrades. Hospital spokeswoman Sandi Poreda, told The Associated Press that staff determined on Dec. 22 that the server had not stored video since Nov. 28. The server has been fixed and footage is being recorded. The hospital has also been in the process of installing new cameras.

An adjacent church and apartment complex also did not have any video.

Florida's Agency for Health Care Administration has started an investigation into the hospital to determine if any state or federal laws were broken. The Florida Department of Law Enforcement is also investigating.