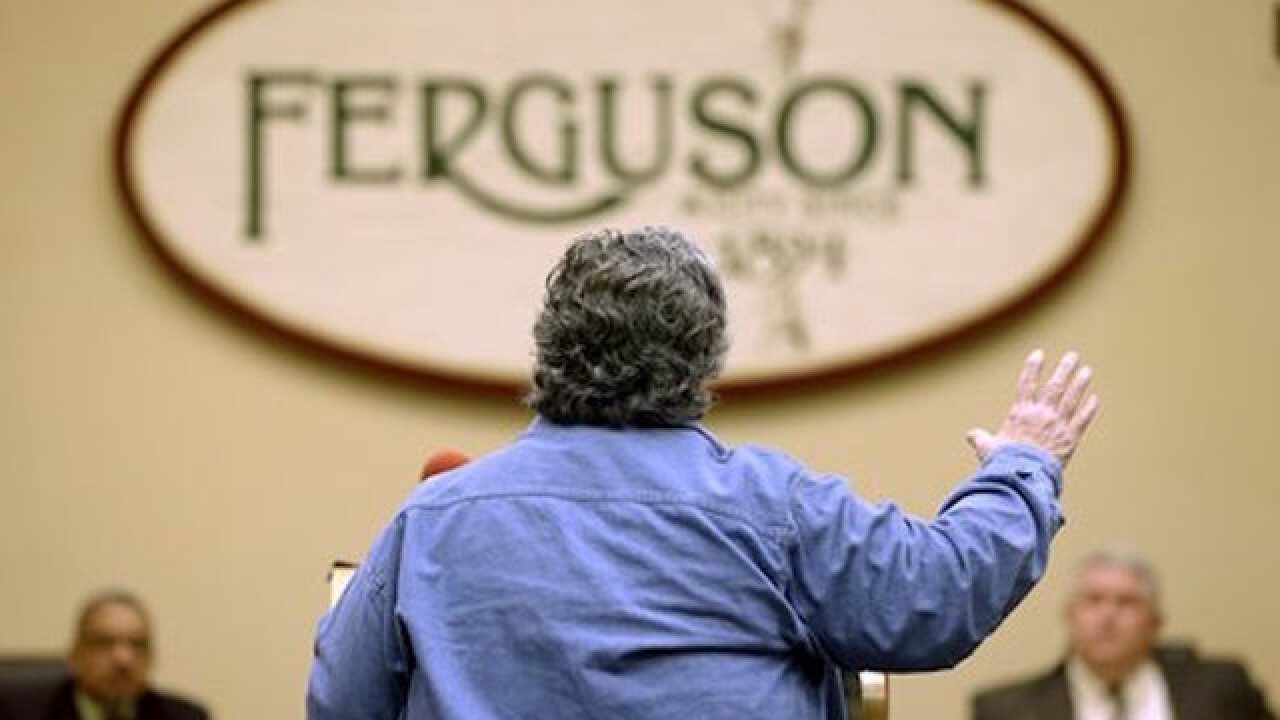 Jeff Roberson
<p>Gerry Jasper speaks in favor of an agreement with the U.S. Department of Justice during a city council meeting Tuesday, Feb. 2, 2016, in Ferguson, Mo. The meeting was the first opportunity for residents to speak directly with city leaders following a preliminary consent agreement with the Justice Department that would overhaul of police policies, training and practices, fallout from the fatal police shooting of 18-year-old Michael Brown in 2014. (AP Photo/Jeff Roberson)</p>

FERGUSON, Mo. (AP) — Ferguson's cost of implementing reforms spelled out in a consent agreement with the U.S. Department of Justice could approach $4 million in the first year alone, according to new estimates that further raise questions about whether the community can afford it.

The City Council in the St. Louis suburb is expected to decide Tuesday whether to adopt the agreement. If it doesn't do so, the Justice Department could file a federal civil rights lawsuit. Ferguson was thrust into the national spotlight after the fatal police shooting of 18-year-old Michael Brown.

The community faces a high financial burden either way — fighting the lawsuit would likely cost millions of dollars.

Brown, who was black and unarmed, was shot by white officer Darren Wilson on Aug. 9, 2014. Wilson, who later resigned, was not charged but the killing sparked unrest, deepened scrutiny about police use of force and law enforcement's interactions with minorities, and led to a Justice Department investigation of Ferguson.

A March report by the Justice Department was critical of police practices and a profit-driven municipal court system. After seven months of negotiations, a consent agreement was announced last month that envisions a top-to-bottom reshaping of basic practices such as how to conduct traffic stops and when to use force.

Since then, estimates about how much it will cost were mostly guesswork, ranging from $500,000 to $1.5 million for the first year.

But Ferguson officials on Monday posted an analysis on the city's website showing the cost estimate to be much higher — between $2.2 million and $3.7 million for the first year, and $1.8 million to $3 million in each of the second and third years.

Ferguson already has a $2.8 million deficit due largely to fallout from the shooting — overtime costs for police during protests, lost sales tax revenue from businesses damaged in fires and looting, legal costs, lost income from municipal court reforms already in place.

The consent agreement calls for Ferguson to pay the cost of a Justice Department monitor for at least three years; increase diversity training for officers; and purchase software and hire new staff to maintain statistical analysis of police data on arrests, traffic stops, use of force and other police actions.

Mayor James Knowles III said a particularly costly provision calls for Ferguson officers to be among the highest paid in the St. Louis area. City leaders interpret that to mean police salaries should be in the top 25 percent among comparable cities. To get there, the average pay and benefits for each of Ferguson's roughly 50 officers would increase by $14,600 annually.

"That's why we continue to talk to the Department of Justice," Knowles said. "We need clarification on things in that agreement."

Other cities that have faced Justice Department scrutiny have been forced to pay millions, too.

Last year in New Mexico, the Albuquerque Police Department agreed to a settlement that followed an investigation showing a pattern of excessive force. The first year of reforms could cost up to $6 million.

In Cleveland, an agreement with the Justice Department requires a new use-of-force police policy and enhanced officer training. City spokesman Dan Williams said it will cost Cleveland at least $10.6 million in the first year and $7 million for each of the subsequent four years.

But Ferguson, with 21,000 residents, is far smaller than Cleveland or Albuquerque — and less able to absorb the cost. Ferguson's total annual operating budget is $14.5 million.

The city is asking voters in April to approve property and sax tax increases. Even if both are approved, Knowles said, non-police job cuts may be necessary.

Several residents at two public forums last week urged the City Council to vote against the agreement. They fear it will bankrupt the community.

"I don't see the city agreeing to something we can't afford," the mayor said.