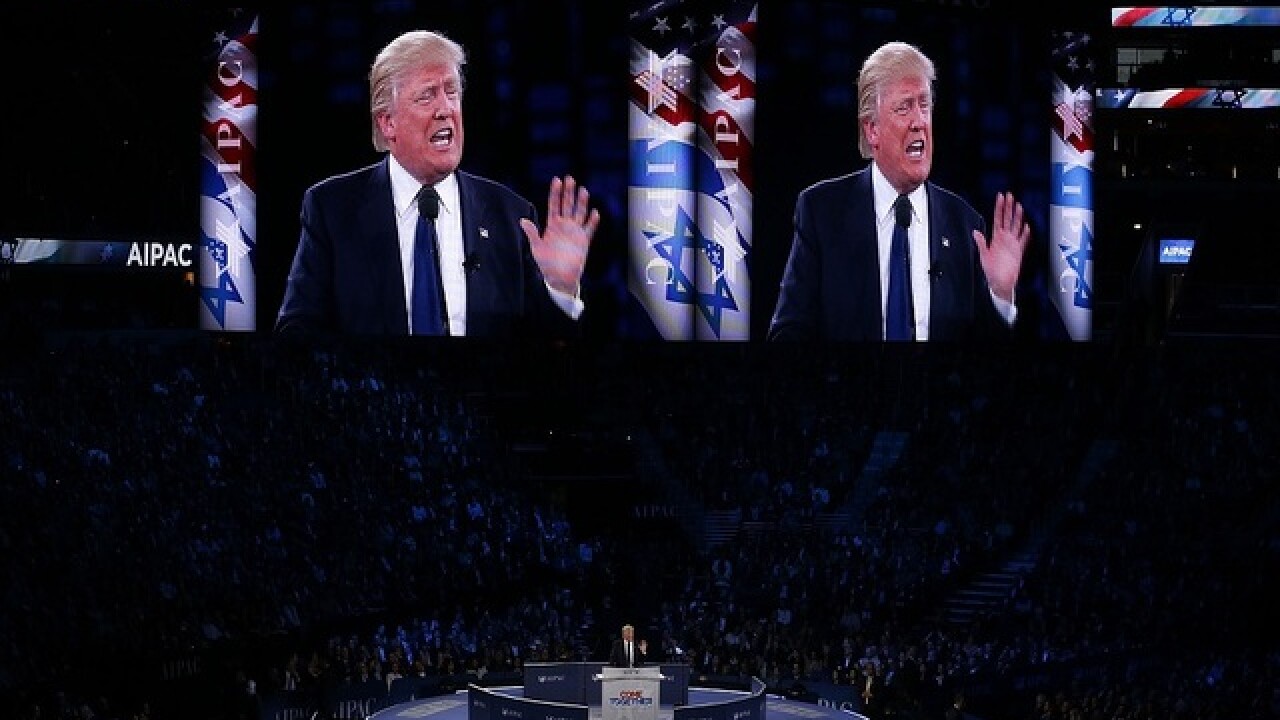 WASHINGTON (AP) — Confronting doubts about the depth of his knowledge of world affairs, Republican presidential front-runner Donald Trump delivered a sober speech to a pro-Israel crowd on Monday and outlined for the first time the team of foreign policy thinkers advising his campaign.
In a lengthy interview with the editorial board of The Washington Post, Trump outlined a distinctly non-interventionist approach for America in the world. It came with doubts about the benefits of the country's decades of foreign engagement, including its role as an anchor of NATO.
"I do think it's a different world today, and I don't think we should be nation-building anymore," Trump told the newspaper. He stressed instead the need to invest in infrastructure at home.
"At what point do you say, 'Hey, we have to take care of ourselves?'" he said. "So, I know the outer world exists and I'll be very cognizant of that. But at the same time, our country is disintegrating, large sections of it, especially the inner cities."
Trump has largely avoided the nitty-gritty of policy details during his campaign, focusing instead on boldly-stated goals and declining to say who he counts among his advisers — despite repeated promises to do so. The billionaire businessman said last week in an interview with MSNBC that his "primary consultant is myself."
His newly-announced team, chaired by Alabama Sen. Jeff Sessions, includes Keith Kellogg, Carter Page, George Papadopoulos, Walid Phares and Joseph E. Schmitz — a group with varying degrees of foreign policy experience.
During the interview, Trump stumbled when questioning the U.S. role in assisting Ukraine in its conflict with Russia and arguing other members of NATO should be doing more.
"They're not doing anything. And I say: 'Why is it that Germany's not dealing with NATO on Ukraine? Why is it that other countries that are in the vicinity of Ukraine, why aren't they dealing?" he said. "Why are we always the one that's leading, potentially the third world war with Russia?'"
In fact, since the Ukraine crisis erupted more than two years ago, the Obama administration has refused to provide the new, pro-Western government in Kiev offensive military equipment to use against Russian-backed separatists. Ukraine is not a member of NATO and has only received defensive materiel from the U.S. and its allies.
And while a February 2015 ceasefire helped reduce the worst of the violence, Germany and France spearheaded that mediation effort. The United States wasn't directly involved.
Trump has also drawn concerns from Jewish leaders for saying he would attempt to be "neutral" in the decades-long Israeli-Palestinian conflict. He worked to soothe those worries Monday in a major speech before the annual gathering of the American Israel Public Affairs Committee in Washington.
In a speech delivered from prepared remarks and a teleprompter — a rarity for Trump, who has panned Democrats for using the device —Trump stressed that he is "a lifelong supporter and true friend of Israel."
Trump's remarks largely focused on Iran, calling the deal reached between the Islamic nation and several world powers aimed at keeping it from acquiring nuclear weapons "catastrophic for America, for Israel and to the whole Middle East."
But he also discussed the Israeli-Palestinian conflict and said he would reject any attempt by the United Nations to impose conditions on either side during future peace talks. He stressed that "each side" in any deal "must give up something."
"It will only further delegitimize Israel," he said of a peace accord imposed on the two sides. "It will be a disaster and catastrophe to Israel. It's not going to happen, folks."
While Trump assured the crowd that he "didn't come here tonight to pander to you about Israel," saying, "that's what politicians do," he noted that in 2004 he served as the grand marshal of the 40th Salute to Israel Parade in New York.
"It was a very dangerous time for Israel and frankly for anyone supporting Israel. Many people turned down this honor. I did not. I took the risk and I'm glad I did," Trump said.
He also ended his speech by announcing that his daughter, who married a Jewish man and converted to Judaism, is about to give birth. "My daughter Ivanka is about to have a beautiful Jewish baby," he said.
Outside the venue Monday evening, anti-Trump protesters gathered to voice anger over his brash political rhetoric and his attendance at the conference. But there was no mass walk-out of AIPAC attendee or other demonstration inside the hall, as some had planned.
He was followed on stage by rival Ted Cruz, who opened his speech by pointedly noting Trump's use of the term Palestine. Although the U.N. General Assembly overwhelmingly voted in 2012 to recognize Palestine as a "non-member observer state," the U.S. does not currently recognize the Palestinian territories as an independent state and the Texas senator didn't miss the chance to take a dig at the front-runner.
"Perhaps to the surprise of the previous speaker, Palestine has not existed since 1948," said Cruz.
Associated Press 2016