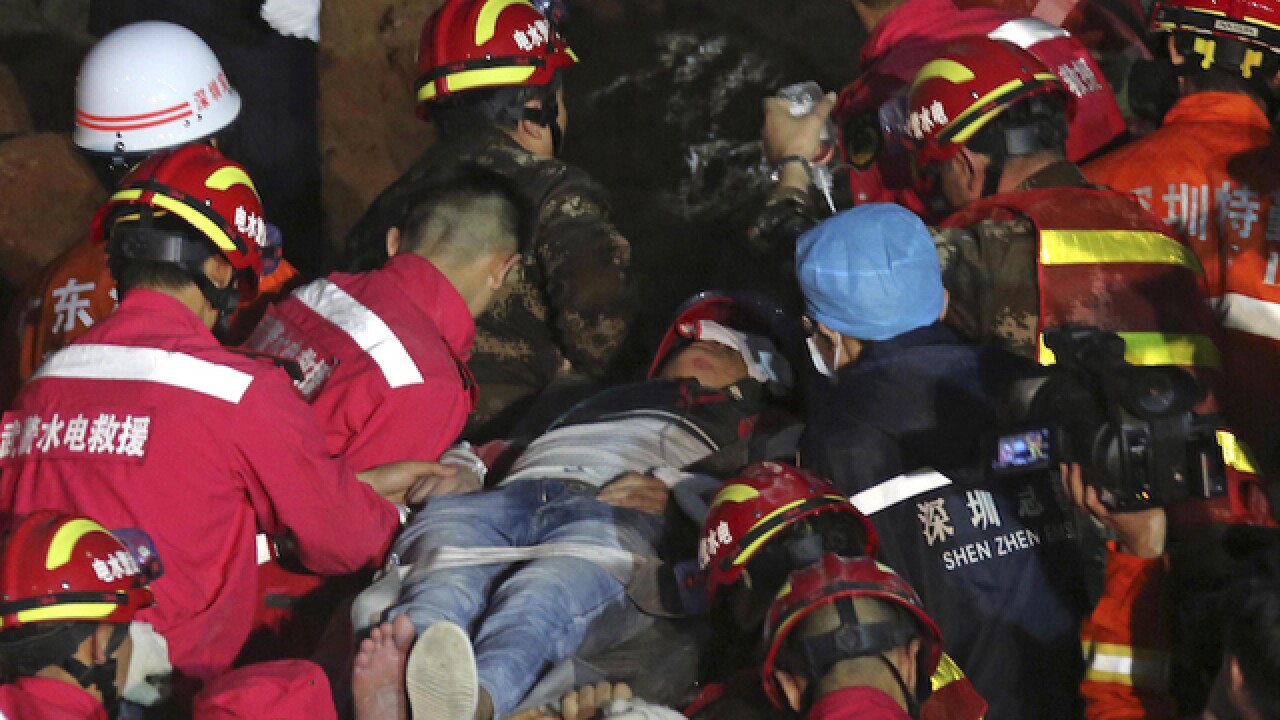 Squeezed into a narrow room under piles of debris for 67 hours, a young man was saved by a door that trapped his foot but gave him space to survive. Rescuers on Wednesday pulled him from the massive mudslide that hit part of a major manufacturing city in southern China.

In a feeble voice migrant worker Tian Zeming, 21, told rescuers his name and that another person was buried near him, according to authorities. But medical and rescue staff who went down into the rubble found the second person had not survived.

More than 70 people are still missing after the mountain of construction waste material and mud collapsed at midday Sunday and flowed into an industrial park in Shenzhen. The city near Hong Kong makes products ranging from cellphones to cars that are sold around the world and it attracts workers from all parts of China.

Zhang Hu, a city vice mayor, told a news conference that four bodies had been found. He said that even though the critical 72-hour period to find survivors had passed, they were continuing rescue efforts with a team of 5,000.

"As long as there is a sliver of hope, we will never give up," Zhang said.

State broadcaster CCTV reported that Tian underwent surgery for a broken hand and on his foot, which had been wedged against a door panel. It said he had been trying to get out of his room when the building collapsed, and the door panel created a space for him to survive.

Hospital boss Wang Guangming said Tian was in stable condition, but extremely weak, dehydrated and with several soft tissue injuries and multiple fractures, according to the official Xinhua News Agency.

Xinhua reported that rescuers had located Tian underground at 3:30 a.m. and pulled him out of a collapsed factory building three hours later. Firefighters had to squeeze into the room and remove most of the debris by hand to get to Tian, who is from Chongqing city in southwestern China.

Residents have said raised questions about why officials didn't act to stop the growing mountain of construction waste, which they said they had feared was dangerous.

The Ministry of Land and Resources has said the steep mountain of dirt, cement chunks and other waste had been piling up for two years.

Heavy rains made the soil heavy and unstable, causing the pile to collapse with massive force.

State media reported that the New Guangming District government had identified problems with the mountain of soil months earlier.

The Legal Evening News said a district government report in January found that the dump had received 1 million cubic meters of waste and warned of a "catastrophe."