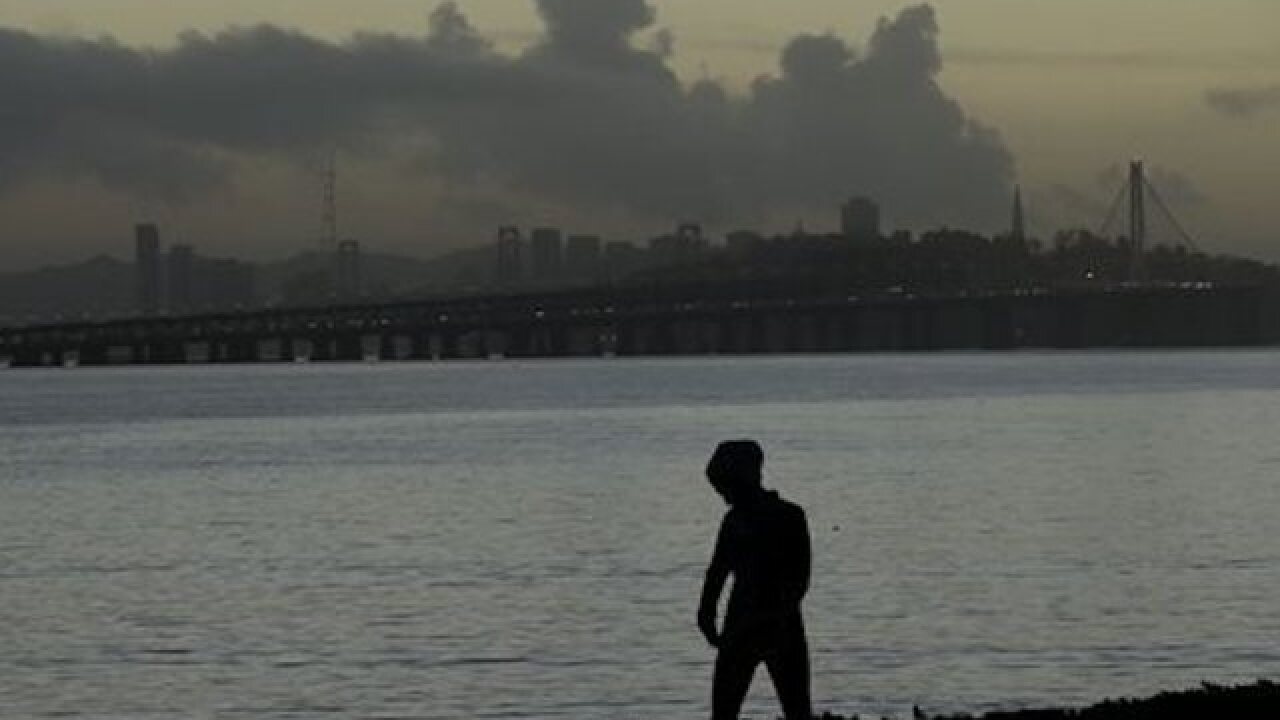 Jeff Chiu
<p>A woman walks along a path as clouds hang over the San Francisco-Oakland Bay Bridge in Emeryville, Calif., Tuesday, Jan. 5, 2016. El Nino storms lined up in the Pacific, promising to drench parts of the West for more than two weeks and increasing fears of mudslides and flash floods in regions stripped bare by wildfires. (AP Photo/Jeff Chiu)</p>

SAN FRANCISCO (AP) — Despite the potential for flooding and mudslides, storms moving toward California were welcome news for a state suffering from a severe drought. But officials warned against reverting to old water-use habits.

As the first of the storms drenched the state on Tuesday, authorities cautioned that even the wettest of winters can't replenish depleted reservoirs and aquifers unless everyone keeps pitching in.

California's water deficit is so deep after four years of drought that a "steady parade of storms" like these will be needed for years to come, said Mike Anderson, climatologist for the state's Department of Water Resources.

"We're at least on a good trajectory," he said. "We've got to keep it going."

The current El Nino — a natural warming of the central Pacific Ocean that interacts with the atmosphere and changes weather worldwide — has tied 1997-1998 as the strongest on record, the National Oceanic and Atmospheric Administration's Climate Prediction Center said, citing statistics that go back to 1950.

El Ninos usually bring heavy rains to California, although it remains to be seen whether people should expect anything like a repeat of 1997 and 1998, when storms killed 17 people, wiped out crops, washed out highways and pushed houses down hillsides.

"DarthNino may finally have California in its sights," said Jeff Masters, meteorology director of the private Weather Underground.

"A parade of strong Pacific storms characteristic of a strong El Nino event will batter the state this week and will likely bring damaging flooding by the time the second storm in the series rolls through on Wednesday," Masters said.

However, Masters and meteorologist Ryan Maue of the private WeatherBell Analytics don't believe this first storm is as powerful as some other Pacific storm systems, and they caution that the storms now following it may land elsewhere.

The current forecast calls for a "kind of a nice level of bombardment" over the next two weeks — probably not enough to cause the tremendous flooding of 1998, but then again, that year's floods didn't peak until February, Masters said.

As much as 15 inches of rain could fall in the next 16 days in Northern California, with about 2 feet of snow expected in the highest points of the Sierra Nevada, said Johnny Powell, a forecaster with the National Weather Service.

In Southern California, between 2 and 3.5 inches of rain is predicted to fall across the coastal and valley areas, and up to 5 inches falling in the mountains.

The first in the line of storms also drenched the desert Southwest on Tuesday and was aiming for the Gulf Coast, but should weaken to no more than a couple inches of rainfall by the time it reaches the Southeast, Masters added.

Flash flooding and flows of mud and debris were a concern, especially in places left barren by last year's wildfires. Residents of the Silverado Canyon burn area in Orange County and the Solimar burn area in Ventura County were urged to consider evacuating.

"The best time to prepare is before a weather event happens, but there is still time to prepare at least a basic emergency kit for your home, your car or your place of work," said Brad Alexander, spokesman for the Governor's Office of Emergency Services.

In Orange County, south of Los Angeles, a homeless man in his 40s was swept off his feet by swift waters and washed nearly a mile down Brea Creek in Buena Park before he pulled himself out, county fire Capt. Steve Concialdi said. He was treated at a hospital for scraped feet and arms.

Rocks fell on the roadway through Malibu Canyon, damaging four vehicles and clogging a heavily traveled commuter route through the steep Santa Monica Mountains, and Los Angeles police were rousting the homeless from normally dry riverbeds.

As steady and sometimes heavy rains fell, Los Angeles Mayor Eric Garcetti urged people to clear gutters and anything in their yards that might clog storm drains, and to stockpile sandbags if their home is susceptible to flooding.

Garcetti also said that the city's homeless encampments have been mapped for the first time, and he promised shuttles to bring people to shelters with 6,000 beds.

Los Angeles Fire Chief Ralph Terrazas said swift-water rescue teams are ready, but he'd rather not deploy them. Authorities hope to avoid a repeat of last September's rescue of a homeless man who scrambled up a tree with his dog when the Los Angeles River quickly grew to a torrent.

The storms are whipped up large ocean swells that could generate hazardous breaking waves at west-facing harbors. Ventura's Harbor Boulevard was closed Tuesday by flooding about a foot deep, police there said.

Altogether, the storms hold the potential for massive amounts of precipitation for a very parched state, but water managers won't be able to fully estimate this year's snowmelt until April 1, when the snowpack is typically at its deepest.

"Mother Nature has a way of surprising or disappointing us," Department of Water Resources spokesman Doug Carlson said, insisting that conservation must continue.

Californians used 20 percent less water this past November than they did in November 2013, before Gov. Jerry Brown declared the state's water emergency, the Water Resources Control Board announced Tuesday.

That falls short of Brown's 25 percent conservation mandate for a second straight month, although board chairwoman Felicia Marcus said the state remains on track to meet his overall goal.

"The fact that per-person water use dropped to 75 gallons per person per day on average is proof that Californians are clearly thinking twice before turning on the tap," Marcus said in a statement.

Despite these storms, Shawn Coburn says growers like him, working thousands of acres in the western San Joaquin Valley, expect no water this year from the federal government's vast system of reservoirs and canals. He blames strict environmental laws designed to protect endangered fish.

"I hope that it rains so much that Noah and his ark are flowing down the San Joaquin River," he said. "The people that run the system are telling us to be prepared for zero."