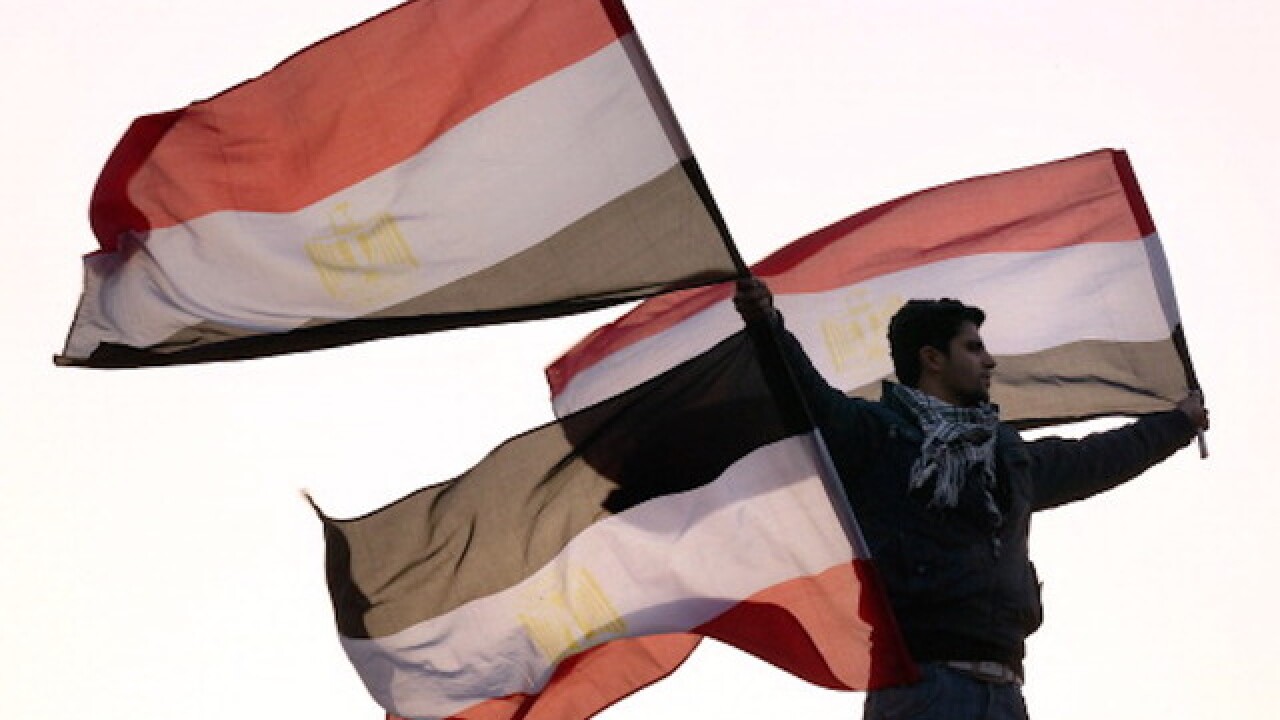 Peter Macdiarmid
<p>CAIRO, EGYPT - FEBRUARY 01: A youth waves Egyptian flags from a lamp post in Tahrir Square on February 1, 2011 in Cairo, Egypt. The Egyptian army has said it will not fire on protestors as they gather in large numbers in central Cairo. (Photo by Peter Macdiarmid/Getty Images)</p>

CAIRO (AP) — An Egyptian official says a bomb has gone off during a raid on a home, where militants were preparing explosives, killing two policemen and wounding 12 people in Cairo's twin city of Giza.

The deputy governor of Giza, Alaa Harass, says two of the wounded in Thursday's explosion are in a critical condition. The blast comes days before the Jan. 25 anniversary of the 2011 uprising, which officials fear may be marked by protests and unrest.

Egypt has been hit by a wave of militant attacks that intensified after the military overthrew Islamist President Mohammed Morsi in 2013.

The attacks, mostly claimed by a local Islamic State affiliate, have dealt a serious blow to Egypt's vital tourism sector.

Egyptian police have been questioning residents and searching apartments at more than 5,000 homes in central Cairo as a "precautionary measure" to prevent street protests on the upcoming anniversary of the Jan. 25 Arab Spring uprising, security officials said Thursday.

The ten-day search campaign was based on surveillance and intelligence gathered over months and focusing on young, pro-democracy activists inside and outside the country, including foreigners, one of the senior officials said.

"We are very concerned and will not allow protests," he said, speaking, as his colleague did, on condition of anonymity because he was not authorized to brief reporters. "These movements are aimed at polarizing society and mobilizing the masses against the government," he added.

Security forces nationwide are bracing themselves for the anniversary of the 2011 revolt that toppled longtime autocrat Hosni Mubarak. Officials, including President Abdel-Fattah el-Sissi, have voiced concern over attempts to mark the anniversary with new protests and security forces have arrested a number of activists accused of planning demonstrations.

The security presence on the streets of Cairo has been greater than in previous years, when authorities also feared anniversary protests. The roundup of activists and the closure of several cultural venues in Cairo considered by authorities to be possible harbors for dissenting views also marked an escalation on previous pre-emptive clampdowns by security services.

Social media users have been particularly targeted this year, with several people affected by the roundups saying that police are asking to inspect Facebook and Twitter accounts to track acquaintances and gauge political affiliations.

Earlier this month, authorities arrested three people who administered over 20 Facebook pages, accusing them of using the networking website to incite against state institutions. Social media, particularly Facebook and Twitter, played a large part in organizing the 2011 uprising and other protests since then.

Ramy Raoof, a Cairo-based digital security and privacy expert said that those who air dissenting opinions publicly are the easiest to track and detain, although some administrators for pages organizing events were likely to have been victims of rudimentary hacking by police.

"The Ministry of Interior has been very active at targeting people to date," he said. "In order to get into the account and shut down pages they need to either trick someone into revealing a password, or use malware to get them to reveal personal data."

One Facebook event page that had been calling for mass demonstrations at Cairo's central Tahrir Square — the epicenter of the 2011 revolt and subsequent protest movements — was cancelled earlier this month after more than 50,000 users said they would attend, and a similar amount expressed interest in the event.

There was no way to determine how many of those who said they wanted to attend lived in Egypt or actually planned to march on the square, likely to be closely guarded by security forces. Facebook, contacted for this article, declined to comment.

State and the overwhelmingly pro-government private media have also been urging the public not to demonstrate on Jan. 25, which is also National Police Day, arguing that protests would cause chaos. The weekly sermons at mosques, which are based on guidelines provided by the state, have also been preaching against demonstrating for weeks.

In central Cairo there has been a heightened police presence for days, with riot trucks and civilian cars carrying plainclothes officers prowling the streets day and night, often accompanying forces raiding apartments.

One resident, an online marketer, arrived home one night this week to find a dozen plainclothes officers inside his building, coaxing the doorman to ask residents to cooperate by offering up their mobile devices for inspection.

"They wanted to see my mobile phone and my friend's tablet and they were checking others in the building," he said, speaking on condition of anonymity for fear of repercussions. "They went through the whole apartment of two of my neighbors, looking for anything like alcohol or personal items that could be an embarrassment."

The anniversary comes at a time when the economy, buttressed in the early days of el-Sissi's leadership by aid from Saudi Arabia and the Gulf, is growing slower than authorities had hoped. At the same time, a wave of suicide bombings and militant attacks has intensified since el-Sissi led the army's ouster of Islamist President Mohammed Morsi in 2013. Over the past year, most of these attacks were claimed by the Islamic State group.

Earlier Thursday, an Egyptian affiliate of IS claimed responsibility for an attack on a checkpoint in the country's volatile Sinai Peninsula that killed five policemen. The Associated Press could not independently verify the claim, which was issued via a statement circulated by the group's sympathizers on social media, however the design and logo resembled previous IS claims.

The attack took place at midnight on Wednesday in the city of el-Arish and also wounded three policemen, the Interior Ministry said.